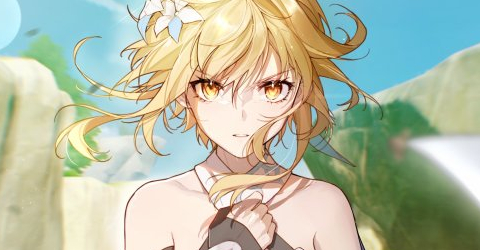 MORIKAWA MIZU
On today's episode of Mizu's Hollow Hunt, brought to you by Otoribashi Rose and the Funky Bunch, the petite blond finds herself tracking a particularly dangerous beast in the wild lands of balmy Cuba. The dossier on this Hollow, code name "Juggernaut", details a monster with a mighty hide and incredibly aggressive behavior which creeps into a nearby village in the dead of night and causes chaos amongst it's residents.

According to reports the Juggernaut Hollow has slaughtered others of it's kind and, if left unchecked, could eventually become a problem for patrolling Shinigami. Soul King forbid it ever evolve and eventually turn into an Arrancar, then it would surely become a nuisance. Reality had other plans however as Mizu stood by it's fallen body, her Zanpakuto having pierced it's thick mask a moment prior. As the Hollow was purified and began disappearing Mizu noted the various injuries already on it's body when she'd arrived to finish it off. What could have caused such damage...? she wondered to herself.

"Hm. So the body just disappears. Unfortunate. Still, that was some good work, Shinigami." Sabertooth's voice crooned out off to the side. The Hollow having been hidden nearby, slowly, the air rippled and peeled open, showing Sabertooth Striker's frame as the water which she'd used to bend light around herself peeled away and collected along the edges of her wings. That, along with suppressing her spiritual pressure had rendered her more or less invisible, clearly having watched the fight between Mizu and the aggressive Hollow.

"You're welcome bye the way. What did he say his name was.... Grand King something? He was causing too much commotion. I'd warned him about that. And sure enough, it seems they deployed a Shinigami to deal with him. A shame you killed him already. I would have liked to tell him I was right all along." She noted calmly. Canting her head a bit to the side as she eyed Mizu. Under normal circumstances, she didn't generally enjoy sticking around once Shinigami were called in. However, well... she'd been having a lot of interesting thoughts lately. After all, she'd managed to strike something up with that human at the docks. There was no reason not to explore......new avenues.

"Ah. But please don't be alarmed. I'm not here to attack you, presently. You Shinigami, consider it polite to introduce yourselves, yes? My name, is Cortada."

MORIKAWA MIZU
With a start, Mizu heard a deeply unsettling voice attached to the visage of a Hollow and immediately switched into a defensive stance with her Zanpakuto drawn and ready for battle. A beast of great size and ferocious attributes, this latest enemy seemed far more intelligent than it's predecessor, ready and willing to hold a conversation with her. Still, it was hardly the first Hollow Mizu had met that spoke to her; usually an attempted surprise attack would follow. Throughout it's introduction and explanation of the other Hollow's physical state the blond Shinigami kept her golden gaze trained on Cortada, every movement considered suspicious to her.

"I don't make a habit of introducing myself to Hollows who will be dead soon." spoke Mizu, a carefully restrained edge to her voice belying her girlish appearance. Perhaps to a Hollow she may seem easily manipulated, she thought, but she would never fall prey to their machinations. Not when she knew exactly what they are capable of. Choosing to emphasize her words, Mizu raised her left hand and displayed a small, though growing, sphere of blue energy upon her palm as she prepared to release a Kidō spell aimed directly for Cortada.

Saber couldn't help but smile just a little as Mizu promptly jumped into a sudden defensive stance. Ohhhhhhh how thrilling that was. An action which swept a slow and steady smile across her features as she could feel her own spiritual pressure ripple ever so slightly in anticipation. But she didn't make any moves. No, she simply focused her raikaku, alert as the shinigami seemed quite intent on combat.

"No. I'm afraid that won't be the case. As fascinated as I am in whatever work you Shinigami.....do.... I really don't have any plans to be slain. Nor do I have any funny ideas that YOU are going to die. That's the difference between myself and the big, stupid oaf you just finished off. I know my place. Every hollow has a purpose. Even you Shinigami understand that much. Why else would you have such a miniscule number of you down here dealing with us at any given time? You don't want us GONE. You just need to...ah what was it.....keep things ....stable? Even? I don't remember how it was described." She canted her head slowly to the side as she spoke, her eyes wandering around thoughtfully, but her reikaku remained sharply aware of Mizu's exact location and any changes in her spiritual pressure. She was perfectly cognizant of the fact that the woman might, at any point, break into a sudden attack or shunpo. Or spell.

"In any case. Some hollows like to make a big mess. Kill people. Even Shinigami. They make a fuss, they get killed. Hollows like myself? I eat a little. Pick off the humans that even other humans don't want around. And I deal with the hollows that begin making too much fuss." She gestured to where the other hollow had died. She glanced toward Mizu as she said this, closely watching the woman's expression. "So you see. Me killing you would be fairly bad. Nothing attracts poor attention like a dead shinigami. If you attack me, I will simply run. I may even maim you, if need be. But kill you? No. And risk your little...friends? Family? Lover perhaps? Coming after me? Meanwhile, if I LOSE. I can only imagine the pat on the back you'll get. Maybe even a promotion." She shook her head slowly. "Is that why you're looking at me like you are? Hm?~ Is there nothing but a big fat wage bump on my face from your perspective?" She ventured.

MORIKAWA MIZU
Mizu remained unperturbed by this Hollow's remarks, having long since gotten used to the taunts their kind would unleash when confronted. Whether out of fear, hatred, or simple egotism Hollows would often hurl insults and provocations at her. The only concern Mizu had was the more articulate a Hollow's taunts, typically the more dangerous they would end up being. Evidently as they grow in strength they also gain more sentience and intelligence, both of which would only empower them in fights with Shinigami who may underestimate their natural enemies and dismiss them as mere animals. Mizu would do no such thing as she is well aware of the danger they impose.

"All that matters is you are a Hollow and I am a Shinigami. Nothing will get in the way of a Shinigami's duty to protect humans, and that especially inclues your kind! Hadō #4: Byakurai!" From Mizu's raised hand the blue energy would further concentrate before releasing in the form of a pale lightning bolt aimed directly for Cortada's torso, it flying through the air at a breakneck pace as one might expect from an electrical current. Though she didn't want to underestimate this sly Hollow Mizu figured a spell like this would be a good gauge to ascertain what it's capable of, and if it's intelligence does indeed correspond to great danger.

Saber narrowed her eyes slightly. It seemed that this woman truly was intent on fighting. The woman's spiritual pressure welled up. Well that wasn't good. It was about when Mizu began to build up that declaration of hers that Saber lips peeled back a little to show her teeth. A soft Tisk of irritation escaping her. But she wasn't upset. And as Mizu suddenly aimed that spell at her, the air around her suddenly darkened as a maw opened up infront of Mizu. The dark yawn of a Garganta, swallowing up the sudden burst of lightning as Saber herself DUCKED down, her own natural speed and attentiveness sparing her the sudden burst of lightning. The attack had been FAR too close for her liking. And immediately she darted into that dark maw, and closed it behind herself.

True to her word. The hollow promptly fled.

But, she had anticipated that something like this would happen. That determination was nothing unusual. It was more or less what was to be expected. But now, in that veil between the realms, she intended to watch Mizu. Curious as to what the woman would do now. Already the gears turning in her head.

She may have fled, but Saber was hardly done with the woman.

MORIKAWA MIZU
Garganta?! Mizu was bewildered by Cortada's actions, having never witnessed such fanciful feats from a Hollow before. Typically they would either barrel into her or flee on foot, not use Garganta to deal with Shinigami magic and disappear. Intent on not being caught by surprise Mizu swiveled in place, her Zanpakuto in hand, and used every sense available to detect the Hollow's possible return. For one as intelligent as Cortada she could not be sure fleeing truly meant feeling and not a mere feint.

Her golden eyes darted in every direction for several straight minutes as Mizu remained alert. It wasn't until about five minutes had passed that she began letting up and returned to a more relaxed stance, her weapon hanging idly at her side. "That Hollow is going to become a threat if it is not dealt with." she said to no one in particular, summarizing her thoughts on their short encounter. It may have seemed diplomatic but Mizu had no doubt it would become as vicious and deadly as any other Hollow or Arrancar, and worried for the next Shinigami that may encounter it. She reluctantly placed her Zanpakuto in it's home at her hip and prepared to leave the area, perturbed about the situation but at least glad she had accomplished her original mission.