Blowing in The Wind [Viz]

Blowing in The Wind [Viz] 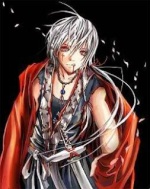 Re: Blowing in The Wind [Viz]

A man stood silently on the top of a tall pine tree, his body looking black as the large bright moon shone behind his body. Today it looked so large, much larger than a normal day. The man had heard that an old friend was back in town and was much more powerful than before. His hearing was execptional, he could hear everything within a surrounding mile clearly if he knew what he was looking for, and he found it. The sound of rushing wind. Normally wind was just wind but in the hands of his old friend it was something much more than, the winds he heard could only be made by a God. The man smirked a little as he said to himself "I think its time we put on a show for our old friend isn't it Aurora." "Hey what about me!" said a voice from inside the tree. On the branch below where the man was standing was another figure, a smaller one that seemed to just have arrived. "I told you to stay home! If he find you here he might kill you easily!" The on on the top said yelling "But i wanted to meet my brothers old friend, it seemed like it would be fun." Said the lower man with a hint of innocence in his voice. "Fine. But can you do me a favour? Can you make the trees in say a mile and a half around look really scary?" Said the top one. "No problem thats my specialty!" Said the lower man ans he gripped the tree and hollow energy spilled into the forest, but it was quickly overshadowed by a much powerful source if energy, shinigami spirit energy that masked the hollow one as music could strongly be heard as the trees started to change.

At first it seemed like a breeze was just coming through but the trees started to rattle more, louder. They started to warp as they oozed hollow like energy, changing. Growing wider and taller, some growing out twisted faces of horror and pain; branches grew into clawed appendages seeming to creep closer to the man that was in the forest; menacing and intimidating ; thats what this once tranquil forest had turned into, a vale of nightmares. No plant was left unchanged, everything was changed into a horrifying vision, yet all of it real. "My friend, we will see each other soon, but how will we meet if you dont find me first." The man said as his voice echoed through out the forest reaching the ears of the other man, a voice distant yet familiar.

Re: Blowing in The Wind [Viz]