Semyon loved days like this. The air was calm and cool, the skies were clear, and sunlight filtered down through the trees, and he'd just found a clearing in the woods. Judging by the sun's position, it was just a little past noon, and that meant it was time for a nice, rousing set of sword drills before lunch. Of course, the fact that he still needed to find a river so he could catch said lunch meant that he still had a bit of time to go, but with a nice, open area like this, it would be a waste not to take advantage of it and get the day's practice out of the way.

The tall Russian man carefully set his bag down out of the way, reaching into it for a moment to retrieve a plain strap of black leather with an attached sword. After undoing the peace-bond holding the blade in the sheath, he slung the belt over his shoulder, so that it crossed in front of his chest, and drew the bastard sword from his back. Then, he began to review the lessons of his childhood, moving with the smooth ease of someone who has drilled these motions for decades.

"Your stance must be wide," he stated out loud in Russian, adjusting his feet to suit his words and sinking into a lower, more balanced stance. "You must not be spare with the fluidity of your wrists and shoulders." The recital of the Russian litany was as much part of the drill as the motions, the fluid slice, executed in slow motion to reinforce the proper methods on muscle memory, serving as the beginning of a duel against a pair of imaginary opponents.

Slowly, as though moving through molasses, Semyon brought the blade up from the swing, twisting both it and his body to deflect a blow from the first shadowboxing "opponent". "You must have a grip on the handle that is loose and unstrained." The precise motion continues, bringing the bastard sword around to parry another imaginary blow from behind. Semyon steps backwards, bringing himself into another precise spin as he swipes the blade downward, removing the first shadowboxer from the spar with a killing stroke. "When decapitating an opponent, it is severe impoliteness to use more than one blow."

Precise steps take him forward and around a vertical slice, and Semyon brings his bastard sword back up with a vicious swing that has more to do with baseball than swordplay. This ends the drill, which focuses on the placement of the feet and the ability to recover from strikes into blocks and vice versa. That said, his training is far more complicated than that. Semyon returns the blade in his hand to the sheath, resumes his neutral stance, and begins again, repeating the entire process, slightly faster. Then, he does it again, and again, first for five minutes, then ten, gradually increasing his speed to the peak of what he can do.

He maintains this pace for five repetitions before sheathing the blade with finality and walking back to his bag, leaning against a tree and panting for breath. He does not seat himself; that would defeat the purpose of endurance training. He reaches into the bag and pulls out a hard plastic bottle, filled at the last stream he passed, ignoring the field rations in favor of the chance to catch something fresh later. Two minutes, and then he would be back to work, this time with Chi.

Semyon could probably have taken a little more time on his break than he did, but after a brief respite and a drink of water, he returned to the middle of the clearing with a deep breath, closing his eyes and focusing on his Chi. The outside world faded away for a moment as he focused on his own spiritual energy, taking the modest river and dividing it in two, the Sei Chi overtaking the Dou Chi for the moment due to his calm, focused state. A current of vibrant energy ran along a wide, deep pool, the Chi of Motion encircling the Chi of Silence. In the real world, the tall Russian stood in the center of the forest clearing, hemorrhaging blue Chi into the air at a slow pace due to the inefficiency of his technique. He needed this practice, but sometimes it felt like ramming his head against a brick wall with how slow the rate of improvement was. Nine years and still amateurish compared to Batya. He could only hope a breakthrough was forthcoming soon. If he managed to go a whole decade without appreciable improvement he didn't think he'd ever live it down.

Marshaling his focus, Semyon returned his full attention to his Chi, which had shifted in balance with his wandering thoughts, the Dou Chi moving to overtake the Sei Chi. Opening his eyes, the swordsman seized hold of the Motion and stepped, moving at superhuman speeds across the clearing and bringing his sword down in the first swing of the form from his earlier practice. He could feel the wasted Chi from the motion, dampening his footfall and bleeding off from his legs during the movement. He continued anyway, pushing himself to increase his speed to even loftier heights now that he was using all of his power in the drill.

Unfortunately for Semyon, all the wasted Chi attracted the attention of something else. While Karakura itself was well defended, the edges of the forests still housed feral Hollows, hungry for the next palatable morsel to make itself known in the vicinity, and one such creature picked up the scent of the Russian swordsman's spiritual energy. It roused itself onto eight legs, sinuous tail curling up behind it in a crescent, tipped with a vicious stinger, and began walking towards the source of the tantalizing scent that had roused it.

Back in the clearing, Semyon sensed the rapid approach of Hollow reiatsu, interpreting the pressure against his sixth sense as the scent of a desert wind, dry and devoid of anything like life. "Derr'mo!" The Russian curse slipped from his lips as his concentration shattered, and the man ran over to his bag, naked blade in his right hand as he scooped up the plain satchel and took off running in the opposite direction. The gigantic scorpion chased him through the trees, crashing through the smaller ones as often as it went around them without any signs of stopping. After his exercise, Semyon wasn't making much headway getting away from the thing, and his breathing was getting even heavier than before. With a sudden burst of speed, the pursuer lunged forward, stinger driving straight towards Semyon's back. The swordsman glanced over his shoulder at the increased noise, just in time to twist mostly out of the way, the tip of the stinger grazing over his side.

The sudden influx of pain from the relatively small cut took Semyon by surprise and almost sent him straight to the ground. The skin around the cut began to bubble and melt as though submerged in acid, and every nerve in the tall man's midsection felt like it had been used as a candle wick. The stinger approached again, and it was only instinct that let him parry it away with the flat of his blade. The hardened bone scraped against Chi-forged steel with a loud grinding noise as Semyon tried to reach the state of non-attachment that he'd been taught was ideal.

"A brain is only useful until faced with your enemy. Then it is useless." Reciting the words of the lesson was a crutch, and one that would easily get him killed if he didn't work on it, but not being able to fight back would get him killed just as surely. Still unable to bring his Chi into balance for a Crescent Step, Semyon dropped like a puppet with strings cut, legs bending severely as he leaned backwards to allow one of the gigantic white pincers to pass over him. "The only useful thing in this accursed world is will." He could focus a little, now, remembering long hours of meditation to suffuse his very being with his Chi, the energy of life and will. His free hand came down, touched the ground, pushed. Chi enhanced his muscles, sending him tumbling haphazardly away from the second pincer and into a roll that let him recover his footing.

"Suffuse your body with its terrible heat."

Stress and memory warred, and memory won, the excess Dou chi venting itself in the form of a glowing extension to Semyon's blade as the swordsman forced his Chi into alignment. His eyes began to glow blue, a tracery of blue-green lines wound across his skin, and the stinger coming ever closer seemed to slow, as if it were moving through sludge.

"The sanctioned action is To Cut."

The Lightning Blood Stance made his movement far faster than it should normally be, the single Crescent Step allowing him to bat aside the stinger once more and appear on the back of the Hollow, already stabbing down at the head. The scorpion-like monster twitched, then collapsed as though its strings had been cut. Semyon managed to sheathe his blade and dismount, but swiftly followed suit as his Chi rebelled against being forced into that kind of precise balance. He probably would have vomited, had he eaten since breakfast. As it was, he went into a coughing fit, exacerbating his wounded stomach. He knelt in pain for what could have been one minute or a dozen, before finally picking himself up and grabbing some of his spare clothing from his bag. He wrapped a shirt around his midsection and tied it off as a makeshift bandage for the small cut and sensitive skin surrounding it.

He needed to do better. 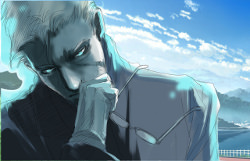 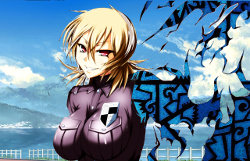