Happy to Serve you~ 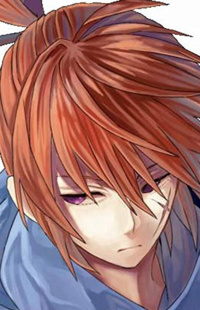 Goodnight moon.
Okuda was barely standing, it was taking all he had left to do just that. Fighting was long gone from the equation, hell just thinking at this point was causing him great amounts of pain. He stared at the woman, trying to walk towards her, but now stumbling a bit, blood dripping from his body. He had begun to speak but ended up coughing up some blood instead. He continued trying to walk slowly towards her, nearly falling once, however he was able to catch himself. He then pulled his sword, still in its sheath, and began to use it as a cane.

Staring at the woman he shook his head, the effort causing him to let out a slight howl of pain. “No, dying in combat could be honorable...if it wasn’t against someone so clearly overmatched for my current skills, its smarter to live to see another day than to try to fight now and die, one day I might match you..but today is not that day.” Okuda was completely spent, he could try to summon his mask to try and fight more, but he was at his full strength a moment ago when he was fighting her.

He was at full strength and she brushed him aside as if he were nothing more than a gnat on a hot summer day. He knew that trying to fight her was pointless, that and his stamina was spent, he was running on empty. He knew he did not even have the strength to make it back to the Seireitei itself let alone his squad barracks or the medical facilities, he would have to hope that this woman showed mercy to him and either had some sort of healing power or brought him to the proper facilities... Stepping up to him and giving him a smile, she decided to show him a bit of what he was missing. Something that would both intimidate and enthuse him to reach for the stars. And also be around in the very likely case that his exhaustion prompted the Hollow reiatsu to flood his system and begin the process of a takeover. Didn't even need his Hollow to try, it was just a natural response for a body that did not have the adaption to it older Vizards like Ulv did have. Though there was always a chance it didn't happen, the stuff was random after all.

"Mmm, let me show you what you are trying to match. Bankai" Ulv pointed a finger at him, and power exploded from her, so incredibly thick the air felt like jelly. And forming around her was an incredible suit of armour with massive wings that stretched from the back and thick armour plates, with the solar-esque flame of her soul roaring within the amber metal that made up the Bankai. She would then reach out for him, to grasp him in her armoured gauntlet, and in a handful of seconds, they were on the Rukongai outskirts, beyond the 88th district.

"So" Ulv spoke, her voice somewhat resonant coming from the inside of the armour "What you have done risks losing control to the hollow reiatsu inside you. Regardless of your Hollow's opinion, a takeover is a liable thing to occur in the next half an hour. So I am keeping you here, way away from anyone else, to make sure it doesn't hurt anyone if it does happen"

I See Stars...
Okuda watched in the last fleeting moments of his consciousness as the woman suddenly entered her Bankai. He barely could process the information that the woman was saying and doing let alone respond to her. He also could do nothing when she had grabbed him and suddenly flew him off to the outskirts of the Soul Society, past many of the habitable areas. He wanted to respond, to say something but he had nothing left in him to really give at this point, his fuel was completely spent and he had nothing left to give at this moment.

Shinda-en himself was also exhausted, the Hollow was the one that was giving the Shinigami the strength to fight after all, and when he was so soundly beaten by the single attack from the woman, Shinda-en also was wounded, not as much as Okuda but enough that even if he wanted to take over the Shinigami, he could not. All the while, deep in the recesses of his soul, Okuda could hear Asahi laughing as the last moments of clarity fled his mind and soon all he could see was blackness as he had passed out completely and totally...

1, 2, 3
Permissions in this forum:
You cannot reply to topics in this forum
Who is online?
In total there are 12 users online :: 0 Registered, 0 Hidden and 12 Guests