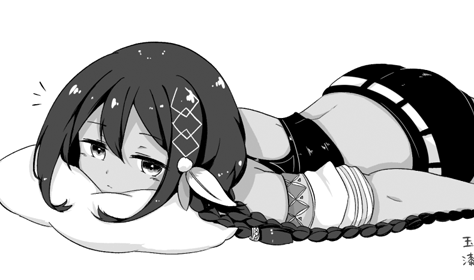 "Are you kiddin? Yugs is an awesome cat name!" Rio exclaimed as she guided Yugiri into the estate. If Yugiri's pet wasn't outside, then perhaps it was inside where cats were easily known to hide in the strangest of places. She went towards the kitchen and begins searching around for where the cat might be.

Looking through each cabinet, she hadn't yet found the cat but she was not going to let herself be deterred. She had already gotten this far, might as well find the little guy, right? Once it seemed like the kitchen didn't yield the results she wanted, Rio exited and went further into the Shihoin estate.


She would repeat the routine of looking through each room, checking under beds, and under tables, all in the hope of finding her beloved cousin's cat. 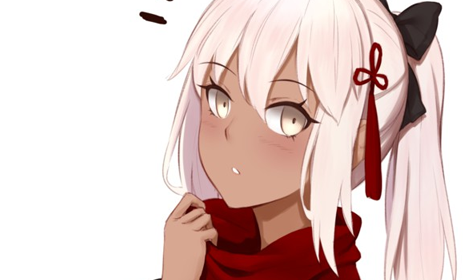 Once more the process began and everything seemed just as grim. She grew more and more depressed until there was a very subtle meow from a cupboard like there was something stuck in there. Being in her gloomy stupor though Yugiri didn't hear it.

Rummaging through cabinet after cabinet, furiously throwing dish after dish out from its collective place, Rio maintained every bit of focus she could to find Yugiri's cat. It was a blessing to know that most of the dishes she threw in such a haphazard fashion were fortified with reishi.

None of them were breaking as they landed, even though the servants were clearly disappointed with Rio's sheer lack of care or grace towards the estate. They'd clean it up, anyway. For now, all that mattered was finding a cat. Yugiri's cat, to be exact.

Just as she was starting to get the idea that the cat might not be here, she heard a faint meow from one of the cupboards in the kitchen and slowly moved towards it, opening it in hopes that this would be the cat Yugiri was looking for and not one of the Shihoin clan members playing a prank or something.

Yugiri Shihoin || 16 Years Old
It was hopeless. She was gone and now she was all alone again. Yugiri was ready to sob while her cousin was carelessly brutalising the estate in search for her dear companion.

As the waterworks got ready to turn she looked at Rio and saw the cat missing a hind leg, tucked away into the cupboard and upon seeing it she discarded her own care for wellbeing or pride and let herself unceremoniously fall to the ground from her wheelchair and try and grab her treasured pet.

She bluttered, eventually getting harder to understand because she was crying while hugging the pet affectionately.

Truly, seeing Yugiri's tearful face filled with happiness made Rio's heart beat with joy watching her sister celebrate cat Yugiri's appearance. How that cat could hide in such odd places was beyond her but nevertheless, the three-legged companion had been found and Yugiri was happy. Walking over to join in on her blissful mirth, Rio petted the cat's head as she chuckled happily.


"No need to thank me, Yugiri-chan! Hoho! We found her together, yeah?" Rio smiled as she patted Yugiri's shoulder and gazed around, eager to celebrate with a meal as she said she would earlier.

Yugiri Shihoin || 16 Years Old
Looked as though she was never going to let her little cat go. The little Yugiri even meowed in protest after a while which convinced its owner to relax up along with the saviour who saved the cat from the affection.

"I guess. I kind of just got pushed around and cried though... I'm sorry I wasn't more helpful."

She sounded disappointed but it didn't care. She didn't care about how good she was at anything, it upset her that she couldn't walk or do anything except medidate and practice her energy manipulation but she had solace in her pet.

"Mhm. Yugiri must be real hungry after being stuck in there all day."

It was a struggle to get herself back in her wheelchair and after a few attempts that led her to frustration, she only conceded to get help from Rio after her pathetic attempts while pouting.

"Um.. Thanks Rio, for finding Yugiri for me."

Rio chuckled as she grabbed Yugiri and set her properly onto her wheelchair, placing the cat comfortably within her lap. Rio then gazed around the kitchen as she tapped her chin. Should she make something on her own or let the servants be of use? Well, at least she'd serve the cat first. Poor kid' must of have been hungry after being cooped up in the cupboard for so long. Rio reached up to one of the cabinets as she opened the door and brought a bowl towards Yugiri and her cat. She placed the bowl down and prepared cat food any house cat would envy. Nutritious and meaty. After doing so, Rio turned to Yugiri curiously and wondered what she wanted to eat.

Yugiri Shihoin || 16 Years Old
She watched her cat eat, it was hypnotic for her to just settle and watch her. When Rio asked her about her own desires for food Yugiri gave her a quizzical look. She wasn't a picky eater, she didn't care what she ate. As long as it was food and edible.

"Whatever you have... You have been working all day and haven't eaten you know."

Rio Shihoin | Defender of Pride
Rio smiled as she nodded happily before returning to the kitchen. She collected a few ingredients from the cupboard and the fridge and quickly set about her business. It wasn't anything entirely complicated. It would be a homemade pot of ramen with the right amount of content. Of course, ramen took some time to prepare so she had turned on the heater and started preparing her broth while she chopped the ingredients into small portions. Turning to Yugiri, she inquired about her day out of curiosity. Just some casual conversation into the food was ready.

"So cat anxiety aside, how was your day, Yugiri-chan?"

Yugiri Shihoin || 16 Years Old
She was content to just watch her cat, with how empty her life felt otherwise it was like a small stabbing in her developing chest. A reminder that her body could change all it wanted but couldn't do something as simple as walk. Yugiri pouted, she bit her lip.

She could say how she felt, the frustrating inferiority she felt because she couldn't walk. The miserable feeling of seeing people look at her with pity. The way she tried to learn kido but could only do so much because she'd never be a real shinigami if all she could do was sit there and cast some measly spells. Alternatively she could say...

"It was alright.. It was mostly about Yugiri though."