The Children of their Sun [WWIV Eastern American Front]

Artist: Poets Of The fall - Song: Carnival of Rust - Word Count: 220
Yawning the back lash of using his release state washed over him, he had felt the slight twinge of exhaustion that came when one exerted themselves. It had been too long since he had last let his true form out and he felt like an old man cramped into a body not quite meant for him now that he was back to being a smaller size. While he stretched he looked toward his leader when she spoke to him and nodded, a wordless confirmation that he would do all that was within his power to hold the line up here while they descended while also agreeing that his number one priority was to their own forces and maintaining safety.

With that his golden eyes watched the lot of them trek underground before turning away and sitting on a still warm piece of rubble, his eye lids closing over the golden orbs while he activated his angelic Intellectius Omnia once more and waited, observing everything that would come into his sphere of knowledge. His job was going to be boring but he would be ready should it turn out to be anything else but. 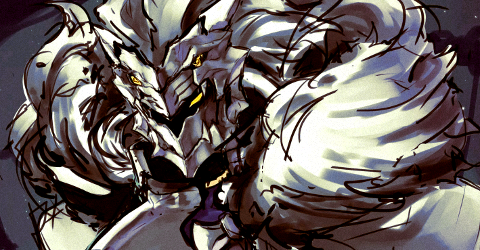 Initially, Helle had figured she’d make the expenditure down alone, but Cyrus’ sudden approach proved otherwise. Orders were then thrown her way leaving her to question the time needed for the two women to clear the whole building while their forces kept the demon’s around at bay. Even with their ability to sense anyone deep within the building, the process of freeing them all proves itself lengthy. And, with that in mind, Helle had decided to reach out to her Liege and grab Cyrus’ arm before she could descend.

“Excuse me for a measly second my Liege, but if I may. I have a more expedient answer instead of us splitting apart. Do not worry either. I shall pay heed to your orders.”

Cyrus agreeing or disagreeing to allow Helle her moment would be met with Helle performing her actions either way. Even if her Liege decided to head down, Helle would find her idea still fitting within their current plan, possibly making everything simpler for the both of them.

Stepping forward towards the entrance downwards, Helle closes her eyes and drops her hands down her side as she takes a deep breath as the air about her changes slightly as her Reaitsu begins to rise as she calls forth her Reiryoku. Yet, instead of a billow of energy forming around her, Helle’s Reiryoku began to spill from her body outwards interacting with the untamed Reishi directly around her seemingly snapping onto it and causing both forms of energy to intermingle with one another.

“I shall handle this quickly, my Liege. My Vollständig is fully capable of such a simple task.”

The air around her took on a shimmering display of magnificent colors reminiscent of an aurora borealis. Forming a cape behind her, the shifting lights held a definite mass to them that singed the air before opening up behind Helle like large angelic wings that had immediately lost that prior mass, and with one beat of the wings, that splendid energy flew from her painting the building around Cyrus and her in that same brilliant mirage of color coating it, and like a waterfall, fell from the building’s edges to the ground level before seeping into the ground and continuing to spread its influence until the whole building became one with Helle’s Vollständig.

Helle has integrated the surrounding Reishi around and within the building as her own merging it with her Reiryoku giving her complete control over the Spiritual Particles, and with said connection, she has become capable of seeing everything within the building: all living and nonliving beings that exist within her realm. It only took a simple thought for the Reishi in the area to assault every demon within the building incompaciting practically all enemies in seconds. Not only that, but with Helle’s power, she began to free any captured Quincy, snapping any chains that may have held them, opening all prison doors they were rotting in, and undoing all binds. With her power, she is able to quickly assess the condition of them all focusing her mind to process the mass of information.

“I have freed all the Quincy and dealt with any demon my Liege. You are free to proceed forward because some of our kind are in need of attention, and surely, your face will grant them some respite.” 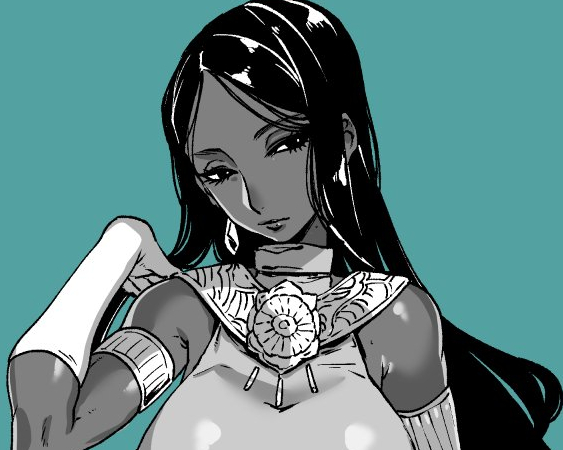 Cyrus of the Blissful Flame

Cyrus allowed herself a small nod of approval at Helle's display. Perhaps in most instances, she would not necessarily have wished for such an overt usage of force. But she had already made more than clear that the Vandenreich would use any means necessary this day, and she could not begrudge Helle for her approach.

And off the Grandmaster went, seeking those lost children of hers to bring them home once more. It seemed as though many of them were in a relatively good condition, though certainly very far from what ever might have been called ideal. She imagined this was in no small part simply a consequence of their having been taken under the guise of willingness. Cyrus hoped it was a guise, at any rate. With a small, graceful smile on her face, she addressed the now-freed Quincy, in the most reassuring tone she was capable of.

"I can never possibly apologize enough for the time you have spent here. But the full weight of the Vandenreich has come for you now. Let us go home, yes?"