Recently, Chidori came to the realization that despite being in the 7th division for half a year she has yet to actually meet her captain. And what better time to do that then when she’s going to be going on maternity leave?

There was a message sent a notice the day prior by one of the Shihoin’s servants. It felt odd to her honestly, as there was a conflict of status going on. While Chidori was still very respectful to the hierarchy of the Gotei, she felt as if she was exerting her royal status to strong arm her captain into a meeting. She was hoping that it didn’t seem that way, and regretted not sending notice in a normal way. Anyways, this meeting was bound to happen sooner or later. Chidori was technically supposed to do this a few weeks ago but held it off as she felt fully capable of continuing her service, but with the new pain she’s been experiencing and the recent news that she was having twins, she decided that it was probably best to slow down and focus on her health.

Approaching her captain’s office, Chidori made note of an observation: everything was a yurt. She personally had no idea why, there was probably a good explanation for it, but it confused her and, honestly, formed more questions in her mind. Entering the main building, Chidori took a quick moment to tie up her hair and seem slightly formal, as she approached her captain wearing her standard shihakusho. As she opened the door, she knocked and spoke.

“Uh, excuse me? It’s Chidori, I notified you I was coming yesterday?” 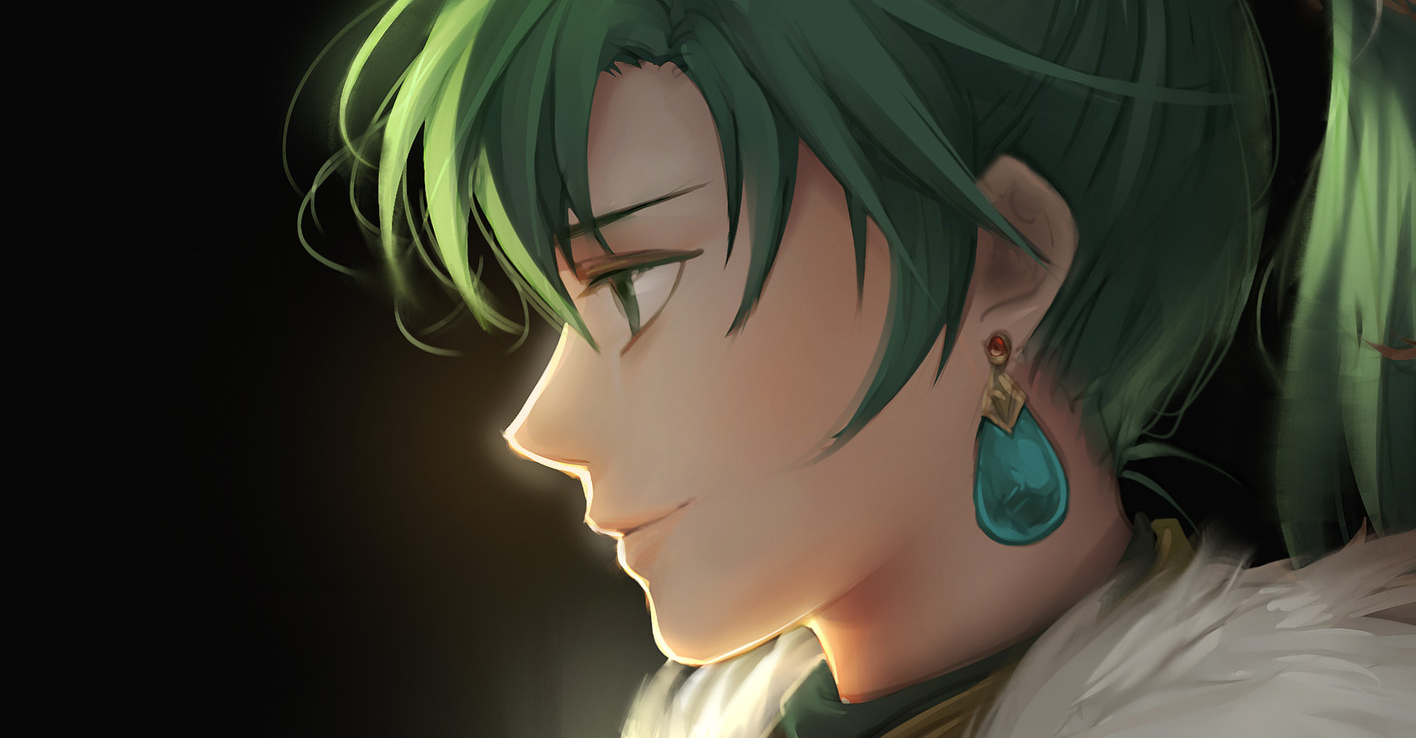 KAGAYAKU NO MURASAKI
"Oh, Chidori! Come in come in, I'm just finishing up a little bit of paperwork."

To say Murasaki had a lot on her plate right now was a bit of an understatement, given she'd been working on bringing a former state criminal back into the fold of the Gotei as a productive member of society, on top of running a still-burgeoning division. Still, there didn't seem to be any real indication that it was really getting to her, and honestly, that was just because it wasn't. Sure, there was a whole lot going on in her life, but she could handle it now. Things were better.

"So, whatcha need to talk about?"

Pouring herself a small dish of sake, Murasaki gestured to the bottle briefly, smiling gently to her guest.

"You want anything to drink? I've always got tea if you're not feelin' somethin' this strong right now."

Surprisingly, her captain was much nicer than she expected. Also quite pretty, something that seemed to be common among leadership. This caused her mind to wander for a moment, wondering if all good leaders had to be attractive. Then she was offered a drink. "Oh, no, I'm fine. I can't drink for reasons I came to discuss with you..." Chidori walked in the room completely, lightly closing the door behind her.

"I've come to you today to talk about a few things. The main one was to notify you of my maternity leave. I'm going to be gone for, most likely, the rest of the year unless I can strongarm the father to take em from me for a month or two, but I doubt that's going to happen." A weak laugh escaped her lips as she pictured the situation of her yelling at Sol to take the kids. He'd most likely agree, but then again maybe he won't. Chidori was sure that they both have changed in their time apart and he might be a completely different person come September. "Being due for September, I forsee myself being out of commission for a good while, which is why I'm requesting for the rest of the year." Alright, that was one thing down.

"Also, just off the record, you're the shinigami who is part zanpakuto, correct? Apologies if it's rude for me to ask, I'm just wondering because of... reasons." Her tone of voice would make it seem like this was just an honest question, and it was. Chidori meant nothing by asking it and would be fine if it wasn't, but word around is that Midori was back temporarily. As far as Chidori knew, that was the only person to make a zanpakuto through unconventional means.

KAGAYAKU NO MURASAKI
"Oh, congratulations! Well don'tcha worry about that, I can getcha that leave no problem at all. It's totes daijoubu, so take as much time as ya need!"

Murasaki made a note to herself to go looking for some sort of gift to send Chidori's way when she had the time. Of course, first things first would be to talk with her family more and figure out exactly what to get her... Well, there were a few Shihoin all over the place in Soul Society, so that wouldn't be too hard.

"Hmm? Ahh, yep yep, that's me. Miss Hanpakuto herself. Why, what's up? Need some insight on how zanpakuto work or somethin' like that? I can totally help if ya need, though the stress might not be great if ya got a baby on the way."

While Chidori was going to initially inquire about Midori, now that Murasaki offered the help she might as well take it. "Hm, actually yes, I could use your insight."

"While me and my zanpakuto have made a great leap in progress and we have no trouble working together, in fact I'd say we work better than most people in the Gotei. My- our problem is that she still refuses to treat me as a partner if that makes sense. To her, at least I think, she sees herself as a tool and me as her master, and despite what we are able to do, refuses to see me worthy of using her. And I know that between us, communication has always been a little rocky, but her personality is incredibly difficult to work with."

As she said this, sand particles seemed to just spawn in the air around Chidori, all of the congregating behind her before eventually taking the form of a person . This person Chidori knew too well, mainly because it was the said spirit in question. Casually, the spirit placed it's arm on Chidori's shoulder and used the other to remove a pipe from her mouth, smoke leaking out as she spoke like it was water flowing.

"Now, now Princess, that's no way to talk about me as if I was not here. I'm always with you for one, and for two I personally take offense to that. I think my personality is fine." The spirit completely ignored Murasaki's presence as it chastised Chidori for her comments. All Chidori could do was sigh, somewhat embarrassed that her captian had to deal with this.

KAGAYAKU NO MURASAKI
"I see, I see... Hm. Well that's not super duper unusual or anything, but obvs I can't just tell ya what the problem is without really givin' it a proper listen or anything. Ya mind handin' me your zanpakuto? I'll see if I can't have a lil heart to heart with it n' work these things out."

Murasaki offered a reassuring smile, knowing quite well that many shinigami had troubles interacting with their zanpakuto spirits for quite some time. Despite the ease with which others achieved shikai, herself included, it was no easy feat for the vast majority of people. Murasaki wasn't blind to that, and she always did her best to help with it. The idea of being totally disconnected from a part of your own soul was...pretty weird to her, really.

"Shouldn't take too long or anything. Or maybe it will, I really dunno, can't give ya a hard estimate. Not a science or anything, ya know? But I'll try not to take forever."

Holding out her hand across the desk, Murasaki simply waited to be given access to the blade in question. It'd be easier to do this through proper zanpakuto communication than just talking to a physically manifested spirit, anyway.

To Chidori's surprise, her captain took the whole spirit manifestation thing quite well. Well, better than Chidori did, because as she started to process what was going on she realized that her spirit had just left it's sword form. It... definitely caught her off guard but now was not the time to react to things so trivial. Quickly, Chidori fumbled around her person for her sword. It wasn't a messy fumbling, more of a forgetful one as her opposite hand touched her bare side only for her to remember that she has changed which side she kept her sword on. Finally placing her hand around her guard, Chidori took the weapon out and laid it flat on the table. It wasn't a very long weapon, just as little longer than Chidori's shoulders are wide, and when comparing it to the size of her captain's desk did it's lack of size really show.

"So... what does this process entail?" This question formed from pure curiosity. Chidori actually knew very little about her captain outside of rumors, which was part of the reason why this meeting was happening face to face. There's much to learn about a person from a face to face interaction. For example, Murasaki would probably notice that Chidori was incredible lost in the situation, whether it be from ignorance or incompetence is uncertain.

Meanwhile, the spirit seemed to be interested in what was going on as well, intently staring down Murasaki, waiting for the woman to make her next move.