I Bless the Rains Down in Africa(Midori/Ulv)

Suddenly, soldier men. Apparently she was in Africa, which was an interesting thing to be told. Looking abashed and scratching her head, she'd dip in apology.

"Ahh..Sorry about that. I was hunting vermin and he was really good at Lightfoot so we crossed quite the distance before I caught up to him. I get a bit one-track mind when hunting good prey like this. I can send a written report to either if they want to know the full details, but otherwise I'll just grab the guy and go"

Ulv gave her explanation as to her presence, slowly walking over to the bisected corpse of a man and picking him up. She didn't know what kind of authority the people that arrived had to accept or deny report offers or to give any details about the guy she had cut in half. But, the chance was always there. 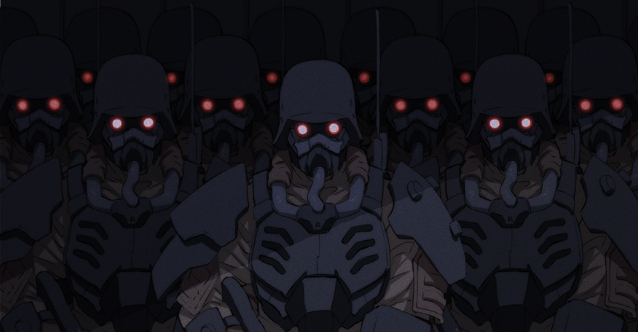 VASTIME 1ST AND FINAL
Noting the corpse, the faceless soldier made no particular reaction, his body not tensing the slightest bit even in the drastic shift in atmosphere. He was simply to remove her, and discern what was necessary. There was no room for feeling, nor any reason for unnecessary conversation.

"His identity is requested. Should he be a citizen of Vastime, this information will be relayed to His and Her Majesties."

Midori quietly took the time to observe the soldier and Ulv as she stroked her chin with curiosity. The raven-haired warrior wondered why she was forbidden to roam Vastimian soil. She had neither met the King or Queen of Vastime - thus, such knowledge was a mystery to her, even with her ties to the other organizations that fought for a noble cause. Perhaps she'd meet them in person one day but for now, their presence - or rather, Ulv's presence was not allowed here. Tapping her foot patiently, she gazes at Ulv as the vigorous warrior presents the body to the faceless soldier.

END POST | THE SUN SETS ON A PEACEFUL WORLD

Citizen of Vastime? Gods, that would be a mess, but fortunately, not so much, so Ulv shook her head.

"Ahh, not at all. Guy's name is Ryu Fu Khun. He's from China. Up to a week ago, I wouldn't have called him an evil man, he was just Satsujinken. You fight him, he doesn't hold back, and if you die that's just the risk you agreed to take when you started the fight.

But then, this cute young girl called Ren Kensai beat his cousin in a martial arts tornament, so he crippled her Cultivation. Basically, she's in a wheelchair now, and can barely push herself along. Kill-Capture bounty went out and I lent a hand as a supporter. Guy took off, I chased, and that is now"

VASTIME 1ST AND FINAL
"Understood. There are no further questions."

Though the soldier had finished speaking, it was fairly clear what he was waiting for before he departed. He had been sent to ensure that this woman was removed from Vastimian land, and he would naturally not leave before his purpose was achieved.

"Many apologises for the misstep, I'll try watch where I am running next time. Feel free to come to the city next week. Lovely Idunn Festival there, lots of meat, lots of mjord, lots of women. It'll be a great time" Ulv told him, giving a nod and then vanishing in a blaze of amber fire, dragging Midori along with her if the woman wanted to do such a thing.

Should she want to, Ulv would get her settled in a nice cafe while she went to go deliver the man that she picked up off the ground. There was still that to be done, after all.

1, 2
Permissions in this forum:
You cannot reply to topics in this forum
Who is online?
In total there are 13 users online :: 1 Registered, 0 Hidden and 12 Guests