Beauty in the Broads of the World [Izumi, Elyss] 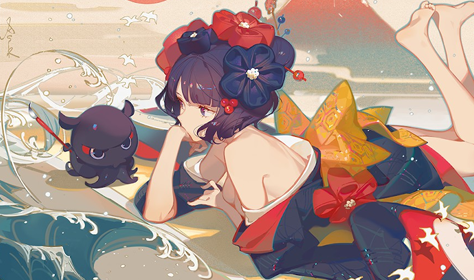 She trailed off, a simple yes. Because what she wanted was more immediate satisfaction, though she could also just talk about her art for days on end but that'd be so rude to her pretty model now wouldn't it? Kidding, she was just too selfish for that. If this pleasure was onesided that was a problem, but only if it was her missing out.

The attack was a surprise, to be so aggressively handled. Ah, how nice. Then it was back to the deep talk and Izumi gave her a small smile. Exactly, she was getting the point. Finally, and Izumi didn't exactly stop unless she was made to by pushing her lips greedily onto the redhead's and forcing a particularly aggressive moment between them for a brief few moments. When she pulled back Izumi did have to comment on something.

"You know, you have such a pretty face. It always looks uncertain. Hypocritical. Your mouth and eyes say different things. You look gloomy and yet you smile."

Izumi gave her a compliment, well something meant to be one anyway. Hands on hips, now that was was she wanted. It's not like there was a shortage of it for her to hold either.

More talking. Izumi was allowed to do as she wanted for those few seconds. Elyss didn’t mind the kiss. It left her lips tingling and filled her head with a numbing buzz. Expectancy? Anticipation? In the past, Elyss knows she would have been appalled right now. Doing this with someone she just met would have seemed sacrilegious. Now? It just seems like a bit of a fun distraction. Maybe she could blame Ulv for her altered views on sharing her body with another. Or maybe she just grew up and isn’t a little girl anymore. Anyway, she should do her part to make sure Izumi enjoys herself. She isn’t really expecting to feel much herself, but the act of helping Izumi get off seems pleasant enough.

“You’re talking too much.”

She doesn’t want to talk about her expressions. She smiles when sad because she doesn’t want the world to know her pain. She stands in front of everyone as a helping hand. She isn’t someone who needs someone looking beyond her surface attraction. At least, she isn’t here for Izumi to look inside of her. She knows the artist doesn’t care. The woman just wants more inspiration.

And to nail that point home, Elyss leaned in of her own volition and pressed their lips together again, this time pressing Izumi down onto the table. With her legs positioned around the woman’s waist, the redhead wasted little time moving down on her artistic acquaintance, a perfect picture of two women: one who lives in the moment, and the other, who is using the moment to forget her past and future.

Izumi | Legendary Painter Soul
"Am I? Shut me up th-"

She didn't get to finish when she was told to enjoy herself and pushed down. It got her to squeal in excitement while the bottle of sake tipped and fell to cover her body in the mindnumbing liquid. She just stared though and just started to explore with her fingers and mouth.

Spend the night away with her model, how exciting. With the kind of hedonistic girl Izumi was, this table wasn't going to be where they woke up. Giving Elyss a taste of her wild and experimental tastes throughout the night all the way until she woke up with a yawn on the bed that seemed slightly broken.

Biting her lip and rubbing her eyes, Izumi rolled off the top of the redhead and crawled out of bed to yawn loudly.

“Shut up.” The redheaded woman that still laid in bed would mutter, turning herself away from Izumi. Already, the act of the other woman waking up and getting out of bed had removed Elyss from her peaceful sleep, a sort of sleep she hasn’t had in a while. Elyss didn’t care much for how great everything was and is, even though she is glad that last night did not leave her disappointed. This is the first time another had explored her body in its recent form: scarred, maimed, and experienced. Despite Izumi’s personality and antics, the woman did know how to appreciate the redhead’s form at least. Ah, but it was just a moment. A long moment, sure. But, just a moment.

That thought caused Elyss to turn her head to the other woman. Knowing her own lack for being gentle, her eyes couldn’t help but notice light bruising here and there. She did pay heed, at least, to not let herself grow too comfortable and seriously harm her partner. However, the thoughts that began to bloom forced a blush onto her cheeks. They really just… She sighs and rubs at her eyes and head, feeling the aftereffects of the alcohol she had drunk and licked off Izumi. Sitting up, the covers would fall from her body. Where the Hell are her clothes at again? She should get ready to head out. People might actually wonder where she is this morning.

Izumi | Legendary Painter Soul
Why would she be quiet!? Didn't she just feel as great as she did? Izumi didn't even care that she was covered in marks. She'd had worse, not that she lingered on trauma any great deal. That was a waste of time to think about stuff that didn't matter to her. Art, pleasure and all that good stuff.

"Hey, don't tell me to shut up. Is that your way of asking for another round?"

Heh. She went to the table and leaned over it to grab a few things. She'd need to go buy food at some point. It's not like she had any skill to cook. So she just bought food all the time and sent the kid out to do it, or just do it herself. Depends on how she felt. Still, her leaning over did give a good view of her from behind to the redhead.

"What's wrong? I thought you were sleeping."

Her words were genuine despite the fact that she was obviously the cause for waking her up.

“I should be asleep in my own bed.”

Izumi may not have anyone expecting her around, but Elyss has people who know how she is when a bit mentally upset. Murasaki or her roommate stressing because Elyss never showed up last night or this morning is a plausible worry for the redhead. So, it wasn’t the fact that Elyss didn’t feel satisfied or anything. It’s the simple fact that some may find this uncharacteristic of the redhead, enough so that Elyss believes it could spiral into a mess. However, it would prove just as wrong to seem ungrateful for the night. Izumi, in all of her quirkiness, did help in keeping the redhead’s thoughts free of worry. It’s Elyss’ own fault for letting her troubles get in the way of her own hospitality.

“We can go at it again another day, but I should really get going.”

Izumi’s attempts at coaxing her would be met with Elyss’ stoic eyes and lack of empathy. Well, the artist got the redhead to blush just a tad. Elyss isn’t completely immune to this sort of stuff, so it’s hard for her to seem completely uninterested. Still, she has to go. Jumping out of the bed, the sudden creak of it reminded her more of the night… FOCUS! With a great sigh, she moved in search of her clothes, finding all of it and putting them back on. She’d then walk over to Izumi, wrap her arm around the woman’s neck, and place a kiss on her cheek that was just as genuine as Izumi’s earlier question. God. This feels like something Ulv would have done, but that should at least let Izumi know that everything is still alright between the two.

But, without another word, the redhead would make her way out of Izumi’s place and enter the streets of the Rukongai, her thoughts mixed between haunting and uplifting. What should she label Izumi as? A friend? Fuckbuddy? The redhead does not know, but she does understand a bit more of what Ulv meant by stress relief.