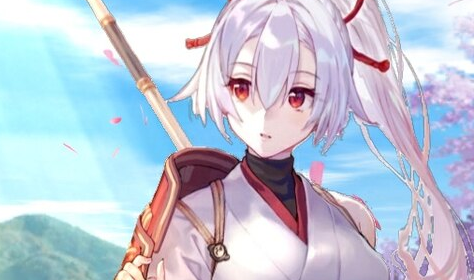 MAKOTO ARIMA | SHINIGAMI-ON-LEAVE
The eyes of Makoto didn't suggest one thing or another, it didn't show any kind of relief but it didn't show any disappointment either. She had only sought to understand where the future of them would lead to especially because Makoto couldn't tell where she sat on that matter herself. If she forgot to restrain herself and act on her misanthropy then she couldn't make the same promise.

It was probably just what reinforced the difference between the teacher and the student.

"I see. Thank you for clarifying that."

Satisfied with her answer, Makoto looked back down at her partially covered stomach and then back to Shishiyuki.

"Excuse me, Lady Shishiyuki. Are you capable of using kaido? I've been trying to heal them but the best I can muster in my spells is just pain management rather than actually helping the injury."

Shishiyuki would not press the matter any further, despite the myriad followup questions and discussion which she likely could have pursued. If Makoto did not wish to discuss it, then she would not ask. That was all there was to it.

"I am familiar with kaido, yes, though I am by no means a master of the art. If your injury is still this severe, I would suggest that you return to the infirmary to have it handled."

Nevertheless, Shishiyuki began a quiet incantation to herself, her hands slowly beginning to glow with a gentle light. She assumed, given the circumstance, that Makoto would rather not return there.

MAKOTO ARIMA | SHINIGAMI-ON-LEAVE
"It's fine there's no lasting affects but I want it to heal faster. It's painful and a nuissance."

Her face had a distinct blush with the whole situation, she had Shishiyuki in front of her with the top of her uniform open. No one walk in, even if it could be easily explained it would still be embarrassing for the moment and her image was something she tried to maintain which is why little slipups like the outburst in the class upset her so much. She didn't want people to know how she really could be, how she was.

A sigh of relief did leave her lips while she used the kaido. It felt really nice to feel the pain subside and know the wound was healing in the process.

So Makoto just stood there and waited until Shishiyuki was done and she could get out of this awkward position.

Shishiyuki had none of the reservations that Makoto rather obviously did about this particular situation, given how simple it would be to explain. Nevertheless, for her sake, Shishiyuki did her utmost to finish the healing spell as quickly as possible, without risking any failings in the healing process.

"I believe that should be sufficient. Do inform me if you still feel any pain."

Removing her hands for now, she briefly thought to offer her a hand of assistance in closing the top of her shihakusho. However, that would likely be taken quite poorly.

MAKOTO ARIMA | SHINIGAMI-ON-LEAVE
She felt her head lull to the side a little, it was really nice with her stomach not in a nagging pain from the injuries. It was nice looking down at her stomach that had lost a lot of the bruising. Makoto nodded with a smile to show her gratitude for the help.

"Thank you very much, I appreciate this a lot."

It took her a moment to remember to close her top since she had got distracted did and neatly got it done up. Makoto took a moment to contemplate what to do now, awkwardly just standing in front of Shishiyuki quietly. Not wanting to keep the silence, she spoke first.

"Would you like to talk the specifics of these classes you mentioned over tea?"

KOIZUMI SHISHIYUKI
"Think nothing of it, Miss Arima. It is, after all, my responsibility as an educator to look after my students' well-being."

Giving Makoto a polite nod in response, she turned away from Makoto and made her way to the door once more, considering the situation at hand. Tea, hm? That did sound pleasant.

"Very well. I know a lovely cafe not far from the academy."