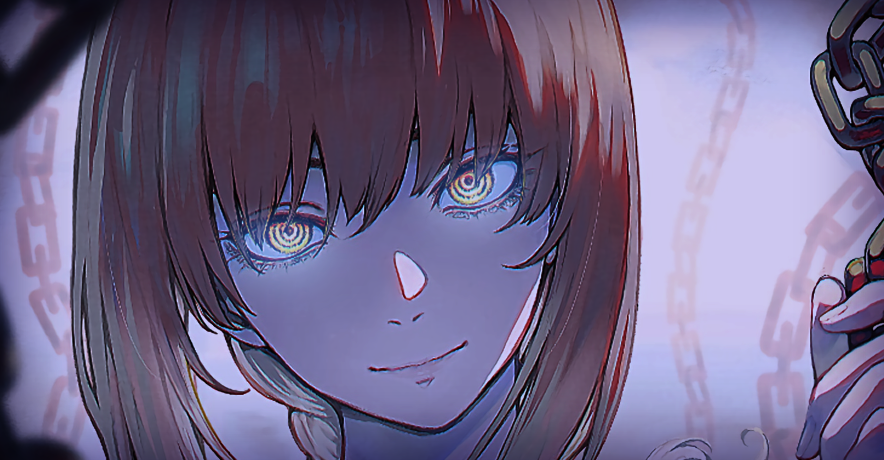 ..What? What time was it? Where was she?

Did she blink? Did she fall asleep? It felt like a weird lapse in time occurred in her dazed state. Pain radiated from her face as if fire was held right on her nose, the two women at her side appearing relieved about... Something. Were reinforcements coming? Was someone else here? God, it hurt to even lift her arm to slowly start forcing herself upright to see what was unfolding - Coordinator Copeland faced with the enemy on her own.

Her eyes felt heavy, the taste of iron in her mouth as she clumsily tried to get back onto her feet, the women behind her pleading her to not move. She ignored them.

Her legs wouldn't listen to her, she could hardly get up much past her knees. She let out a pitiful grunt as she continued to force herself upright.

Something bright and fast suddenly lunged at her, feeling her body slam backwards into the ground. Was it another chain? An arrow? It shouldn't be a big deal.. Maybe some bleeding, her Blut could've lessened the blow but...

She looked down. The object, glowing as steam rose from it, was jutting out of her belly. The vague scent of burnt meat hit her damaged nose, and the sound of sizzling.

It took a second for the horrible, burning pain to really click. It was like someone sliced her open and lit her insides aflame with Hell's fire, the grim light of realization hitting the girl's eyes as tears formed, her lip curled as her mouth opened wide to let out a horrible scream. Unfocused hands worked to grab the handle to try to pull the weapon out of her body, little thought to the consequences of that - that instinctive desire to cease her own pain drove her actions. A sharper scream arose when her hands touched the handle, discovering it too was burning hot, but they still went for it, desperately trying to get a grip on it regardless of the pain, not realizing how deeply the knife went through her. 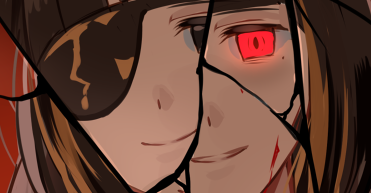 REIDA RAY COPELAND | GUERILLA SPECIALIST
The sound of Vee's agony didn't so much as register in Reida's mind as she flung herself to one side, only narrowly avoiding the catastrophic blow from this wild boy. Phew, that'd been a close one. Her arm made an unpleasant cracking noise as it finished reforming itself, and she flexed her fingers as she continued to keep making distance between the two of them.

"C'mon, fella, do better'n that. I thought this was important to ya? Ain't gonna protect anyone with lil' weak efforts like that."

Of course, Reida didn't really care one way or the other about this particular person, but there was an earnest joy to be found in needling him about something that clearly upset him. And, besides, it was tactically the best option she had at this point. She didn't know anything about his energy reserves, and only had the barest grasp on what his abilities would actually do to her. The only real answer was to wear him out, and making him work harder was the best way to do that.

"'Course, even if ya caught me, I wouldn't talk. Doubt you could put me through anything worse than what I've been through. And hell, it'd be funnier to die knowin' ya didn't even get what ya wanted."

He was losing himself, he huffed and grunted with exertion as he could feel the thousands of tiny pains scattered all throughout his body as he pushed himself to such a level, and yet that woman somehow managed to remain out of his reach. And he began to feel beads of sweat dripping down his body. In that elevated form she had outclassed him, but he had still been able to somewhat contend with her. That form which had boosted her to speeds and strength that was frightening. And now, even though that form had dropped and her power had dwindled back to her normal levels, she was STILL able to keep up with him?! Had her base strengths been amplified from that brief moment of elevated strength? Or had he simply taken more damage than he expected? He wasn't sure, and it worried him.

Not only that, but he caught himself holding his breath when she mentioned the futility of the situation. She had a point..... and she would SEE it in his face as he ....considered her words. Her mistake was honesty. Or, perhaps, a convenient bluff. He seemed to think, wondering if he COULD really manage to beat the truth out of her. "You know. You make a particularly good point. What's the point of dying here trying to beat an answer out of you...." That sphere of chains slooooowly began to close in, shrinking down as chains would suddenly fill the space between them, and the walls slowly closed in around Reida, compressing around her as the air would grow HOT from the pressure. Any hopes of moving in for an attack were gone as she was soon trapped within a smaller sphere within the larger one that continued to contract. Barely enough space between the chains for her to see him open his cloak.

Three long chains retracting into his sides. The burning knife pulling itself out of Vee. The ball of corrupted reishi that he'd ripped out of himself earlier. And of course: The severed hand that Reida had given up in order to escape him. All now were reeled in and hung beneath his cloak. "When you've already given me plenty as it is. It won't be pretty. But pulling the same energy out of her that I did myself will be easy once I've had a chance to get a better look at it." He reasoned, as the air split open, and darkness coiled around him. His spiritual pressure vanishing as he forced that dark portal open again around him. A chain reaching into the darkness. "I imagine we'll be seeing eachother again soon. But until then, thank you for clearing my head." He smiled, with a look in his eyes that said he would fight her again the next time, before the shadows faded and he was gone. Already the chains began to dissolve from all sides, as the Soldat broke the barrier down and began to pour in from all sides.

Medical staff rushing in to both women, while still more soldat were heading into the warehouse to secure the building, as several of the Albedoschiffren scientists moved in to ensure that the hollow bait was secure. It would be no time at all before Vee was being patched up and moved onto a stretcher. While several of the medics would proceed to look over Reida, if allowed, as the cubes pinged and read out. Sites A and B have been Secured. The voice chimed. confirming to them that not only had their area been secured, but that Site A had also been dealt with. The operation seemed to have been a success.