Standing starkly against the barren background of Demon World's wastes, the building in front of Lethe seemed terribly out of place, as if from a different world entirely. It was quiet, and people were definitely avoiding it as if it as going to grow legs and eat them if they got to close. But for her, it......

Annoyed was not the right word, but certainly a similar emotion. It jabbed her. It made her think about things she didn't know. Much like being a Knight of Asthavon, but not knowing what that meant or who she was with it for - and clearly not very valued since nobody had come to pick her up - it made her think she had been alive longer than she had been alive. And that was annoying.

So maybe the house really did annoy her. This must be what they called emotional growth. Now all that was left was to deal with the house itself. It wasn't the houses fault that it was annoying, but it was still annoying none the less. Should it stay, or should it go? 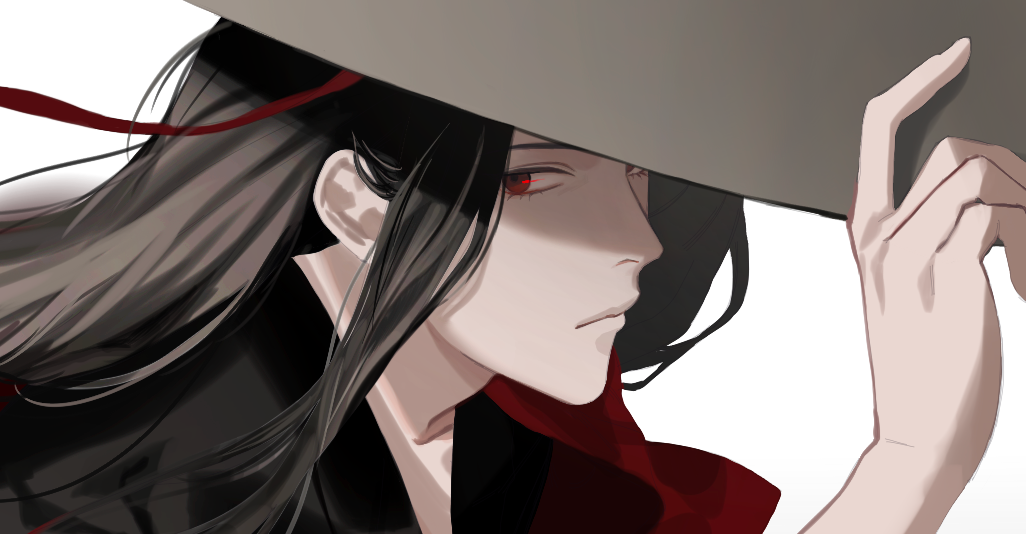 FUUEN | WIND BOUNDARY
With the return of his memories had come a rather damning realization for Fuuen. Chiefly, that he had indeed slain the man named Mifune Soan. He had no particular issue with the loss of that particular individual, of course. He was a violent man, who idealized swordsmanship as a killing art specifically. If anything, a man so antithetical to Fuuen's own being seemed like someone that was best allowed to die.

However, that did not actually change that Fuuen was a man fundamentally opposed to violence. That his swordsmanship was an art for its own sake, not for violence. And so he felt it only right that he return to the place of that failure, perhaps simply to know that it had indeed happened, that it had not been his imagination.

What he had not expected, however, was anyone else to be waiting in this place, when it was a home so removed from anything else, and which so many others had seemed to fear.

Finally, after people avoiding her because she was staring at the spooky house, someone came up to her and asked her if she was lost. He seemed a friendly sort, and walked with a casual ease that implied he was not someone who just ate chicken and moved boxes.

"Yes" Lethe exclaimed, with such a confident surety that it made one question if she was referring to here specifically, or just in general. And then she looked back to the house. "The house annoys me" she'd carry on, before pursing her lips, and shaking her head. "Or, rather....it makes me feel something that annoys me" She'd continue after a little while.

She'd then look to the man who had arrived. He didn't make her feel that annoying feeling, so she didn't think it was his house, but she decided to ask anyway.
"Is it your house?"

FUUEN | WIND BOUNDARY
"How peculiar. It makes me feel much the same way."

Fuuen glanced toward it with something of a dour expression, the memory of his own decision for violence hardly lost on him. It had been perhaps a failing on his behalf, and yet at the same time, one of the few times his memory had chosen to function. The Benika Rakuen'ue, a technique good for nothing but killing, had brought itself forward through his hands as if it were effortless.

It disgusted him, frankly.

"It is certainly not my house, no. Simply a place I've visited once before, and do not intend to visit again after this. Given it irritates us both, shall we bring ourselves elsewhere?"

Simply knowing the place existed was all that Fuuen had particularly needed. He had no need to enter it, or to examine it further. It solidified the memory well enough.

Lethe would look to Fuuen with a delighted face, one positively glowing with delight. She didn't particularly care if it was his house anymore, and rushed up to him to grasp his hands. Your normal person might miss the beauty of the moment, but for an Artist like Fuuen, Lethe's precise and elegant steps, instantly and perfectly measured to get the most out of her movement without putting her off balance at all....she was like a walking painting.

"You've been alive as well?" She exclaimed, before hearing herself speak and shaking her head. "No, sorry. I got excited. I meant...You've been living longer than you've been alive?" Lethe asked, and then lost all her fervor. "Ok, that's harder to explain than I thought it would be. Errr....You feel, like there is more life than what you can remember"

The brainless jabber and bumbling attempt to get the proper words were radically at odds with how she had shifted in like a woman who had spent a year exclusively training her footwork...

FUUEN | WIND BOUNDARY
There was an elegance to this woman that Fuuen found rather difficult to ignore, though he also could not say that he was exactly in the state of mind to be looking at a woman for aesthetic purposes. Even so, it was impressive beyond merely the visual appeal of it. There was a control to it that few would quite have seen.

Her words, however, were what resonated far more deeply with him. It was as if she were describing his own life not long ago, and there was a sympathy which bordered on pity that rang through his head. No, not pity. That would have been outright condescending, and Fuuen was not the sort to feel such a way toward a stranger.

"I know the feeling quite well, yes. It has left me recently, though in its leaving, I suppose that it has created a feeling rather similar place. There is a curious nature to living as someone that is not quite yourself."

He studied the woman only briefly, not especially concerned with her origins or even her reason for being here. That, he knew quite well, was something that might never come to her, or could come to her in a place far from here.

"I would certainly discuss these things further, though not in a place like this. This realm is something of a hostile place, and a displeasing one even beyond that."

Lethe would look to Fuuen, and then to the ground, ad then to Fuuen again. Clearly thinking through something, she even opened her mouth, and then shut it again.

"That's the worry" Lethe commented, a tone that was different from before. It wasn't cold, so much as devoid of any emotion. Intoned, like a machine rather than a normal person. There is nothing to say that if I do open myself up to what is in there, it will be any better than what I have now. Or any worse. Or change anything at all. It is that unknown, that freezes me in place"

Lethe would stand for a few seconds in this voidlike silence, and then snap back to her normal bubbly delight as he said this realm was a hostile place.

"Really?" asked the woman who looked like she could accidentally beat the crap out of someone. "I must have avoided the hostile places. Hmmmm. Do you have anywhere else to go?"

FUUEN | WIND BOUNDARY
"It isn't impossible to avoid them, so that is possible."

Her naivete was innocent enough that Fuuen didn't feel as though he ought to trample on it by simply noting that few would likely cause any issues with her. He chose not to address the more grave matter that she'd spoken of, at least until he could parse it in a better setting. Besides, he didn't quite feel up to the task of speaking to her about matters like that when he didn't know her.

"I have quite a few, yes. Realistically, I ought not be traveling between the realms at all, much less with a guest, but it would be something of a breach of my own ethics if I were to leave you here. If you've nowhere to go, you can wander with me on Earth until we find a place to your liking."

Fuuen didn't mind having company on his travels now and again, though he did have to admit that there wasn't any company that could quite compete with Yugiri. That was unfair though, wasn't it? What a crass comparison to make.

Gone was the morose moments of before, and the puppy had returned, warm smile and delighted body language. Not the eyes though, watching them was like watching a paused video. They didn't shift or change from the deep and ever-present lack of anything.

"Realistically, a lot of people ought not to do things they do anyway. So long as nobody is hurt by your actions, or you acknowledge the hurt and try to mend it afterwards, then you are free to do as you will in the world~" Lethe commented, nodding to herself.

The idea of Earth, was a great one. It - at least would, if she could get the hole out of her chest - made her happy, sad, angry, envious, aroused, vigorous and proud. All at once.

"Ohh, ohh~ DO you have a place covered with like....white? Like, just, white everywhere?"

FUUEN | WIND BOUNDARY
Fuuen didn't agree with her assessment of what one could or could not do, but he was not going to argue with it while they were still here. For now, there were rather more important things to handle, and he gestured for her to follow him as he began to walk once more.

"Everywhere? It's getting to the time of year where you don't see many places covered in that much snow. But there are still a few locations, I suppose, if you were to go far enough out of the way. I have no immediate obligations, so I would not mind terribly bringing you to such a place. Just be careful to stay close, or I might lose you in such a landscape, hm?"

He offered a small smile, mostly making light of her pale form. If she was going to be traveling with him, then it wouldn't do any good to stay completely formal.

"My name is Fuuen, by the by. What should I call you, miss?"