All Work And No Play [Hono, Makoto]

All Work And No Play [Hono, Makoto]

MAKOTO ARIMA
With her promotion to vice-captain the actual time that she'd spent within the Rukongai was diminished greatly but that didn't mean that she was completely devoid of making trips out here. She was a brat from the Rukongai before one of the stuffy nobles that were born and sheltered in the Seireitei after all.

She could've gone out of her way to make the trip by herself but she had opted to bring along a couple of unseated shinigami and sent them to make investigations on their own.

Hono Kaen had remained with her. She was off the warning from the captain so in way that meant that she was under some supervision. She just begrudged that she had chosen to venture to the Sabitsura District for this one and the odd looks that were shot her way but Makoto avoided meeting anyone's eyes.

It was just a routine assessment of the progress on the Rukongai's developments, monitor the crime rates and ensure that everything was progressing well.

Hono Kaen
Artist: - Song: - Word Count: 153
Well at least Hono was getting to do a real task for once! Plus Makoto had asked her to tag along which was... good? Actually she wasn't sure, she found Makoto hard to read. Surely she heard about the warning she got from the captain. Guess that meant Hono had to work twice as hard to make sure they forgot! Though being the only other Shingami with Makoto made her feel... strange? Was it trust? Suspicion? Only Makoto knew.

Hono decided to speak up. "Hey... if it's not to much to ask, think we can swing by the 10th district later today?" She wasn't sure if that was something she could ask, but Hono was very to the point. "So what do you need me to do exactly? Feels strange you made me stay with you... Guess you just know I'm that badass~" She would crack a slight joke, following right behind Makoto.
Coding in Template By:
https://www.platinumhearts.net/u1

MAKOTO ARIMA
"The tenth district? Is it the Eastern Tenth? Right now you stand in the 64th District of the Eastern Rukongai."

She wasn't opposed accompanying Hono there, frankly the shinigami was free to go there herself after they were done if she wanted. If it wasn't in this quandrant of the Rukongai then she wasn't going to spare her time to accompany Hono on a personal matter.

They were getting into some of the rougher territories but the district had come quite well, receptive to the attempts to build the Rukongai districts into being more sustainable.

"The role of a shinigami, especially under our own division is Realm Enforcement. We work with the Sakutaiso and operate independently in the defence and stability of the Soul Society. That involves developing good rapport and leading investigations when required. You're with me to observe, learn and assist where required."

She explained to Hono that she was pretty much just here to be taught and passively assessed for her work quality after the captain's own assessment of Hono.

Hono let out a quick chuckle. she listened to Makoto explain their job. Well... Hono knew THAT, it was her job to keep things running smoothly, but saying she already knew that felt a bit rude, she would slowly nod her head looking at Makoto.

"Gottcha. I won't let yah down!" A slight pause as Hono looked around. A few of the students were giving her a few weird glares. "Say Makoto... Where do you come from?" She was quite sure the exact way to ask. "You from Rukongai? Or somewhere else?" she moved a bit faster, now instead of walking behind Makoto she would now walking next to her superior.
Coding in Template By:
https://www.platinumhearts.net/u1

MAKOTO ARIMA
"I roamed the Rukongai with a bunch of other kids. District to district before joining the Gotei."

Makoto explained with her attention elsewhere, hoping to satisfy her companion's curiousity enough to deter pushing for more details. Makoto was not the type who liked to divulge details of her life--especially not to strangers.

"The Sakutaiso reported a murder a couple of days ago, go and fish for details from that merchant over there and report back to me when you're done. I'll be over there."

She pointed towards the merchant that she'd assigned Hono to talk to and then where she would be. It was a good chance to assess Hono's abilities.

Hono Kaen
Artist: - Song: - Word Count: 117
Oh! Makoto was a roamer? Well, that was pretty common, Hono nodded quickly taking in her story. Hono listened to Makoto explain the situation, a murder? Damn, so the stakes were pretty high? Time to prove yourself Hono!

Hono would make sure her hair was all right, walking towards the merchant in question, upon walking up to her counter, she'd clear her throat using a rather soft voice. "Sir? I heard there was some kind of... Murder..." She said murder as if she was... scared? Her tone was a bit shaky. "Do you know anything about it?" She had some big-ass puppy dog eyes, and appeared to be scared! Time for Hono to bring in the charm!
Coding in Template By:
https://www.platinumhearts.net/u1 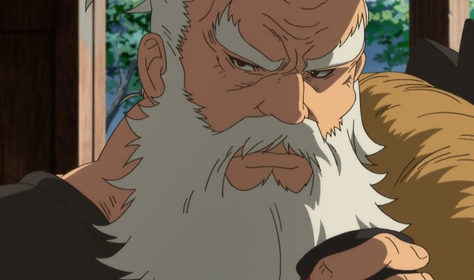 THE MERCHANT
The merchant to the side of the road had noticed the two shinigami lasses, going 'bout their day. Saw more of them kind 'round here over the last couple years. The ol' man had been 'ere quite a bit y'see and could 'member the days where the lil' village in ol' Sabitsura was a bit more rough 'n tumble.

"Eh? Murder, weird thing fer a girlie like yaself to be intrested 'n. Heard it ain't much or nuthin. Guy gotta lil' bit deep inta his gamblin'. Couldn't pay up probbably. Bad fer it he was."

The rough looking ol' geezer reachin' up to take a couple strokes of his beard. Teeny lookin' lass wasn't she? Them shinigami always be a bit peculiar, eh?

Hono Kaen
Artist: - Song: - Word Count: 123
This was when Hono would strike! She would pop out puppy dog eyes, looking directly at the merchant. So he had heard about the murders at least just a little bit. A gambling addict? After a moment Hono would speak up towards the old man.

"I just don't want my dear family to get hurt! Do you know what he looks like? I wanna make sure I avoid anyone who might be dangerous!" Hono whimpered and quivered her lip just a bit, it seemed like she was going to cry. "I just... want to make sure no one is killed again, please help me sir!" She said, a slight tear ran down her cheek. Man... she really was cranking up the acting huh?
Coding in Template By:
https://www.platinumhearts.net/u1

A rough and tumble man who'd seen plenty in his time 'round these parts. He was a smart enough old dog to know what a shinigami was capable of and this here lass would surely be more than met the eye. What's all this crocodile tears he was seein' or did the Gotei really keep a bunch of little girls in their ranks?

Eh. Wasn't his problem anyway. Out here he was more or less concerned with just making it through the next day than get fed up on the little details like a murder here or a robbery there.

"Ah wha'ever. Ain't nothun special. Name was just Jiro or somethin'. Got in trouble with them local gang, like to wear some bandanas or somethin'. Dun' really care much to get involved in stuff that ain't muh business, is how ya keep ya head 'round these parts."

Hono Kaen
Artist: - Song: - Word Count: 184
"Oh! Sorry sir, I'm just... worried, about you and everyone around here as well!" She thought about how to push her act forward, though the only act was her tears, she really did care about the well being of the civilians, that was her job after all right?

A name! A name! Oh Makoto was gonna be so proud of that one. She would sniffle once again, wiping her eyes away quickly. "Thank you sir! I'll do my best to make sure we find who did it!" With that, Hono would bow towards the man before making her way towards Makoto, her tears completely gone, selling the act. Her voice went from a younger sounding one to her slightly deeper voice. "Well, I got a name. Jiro, or at least something similar, and he's suppose to wear bandanas!" She dropped all of the information towards her higher up.

"Impressed huh~ The scared girl act never fails~ Plus I'm so fuckin adorable!" She would place her hand on her hip, thinking about this Jiro guy. "Think I'll get to kick his ass?" She asks fixing a few stray hairs that had gotten messed up during her little performance.
Coding in Template By:
https://www.platinumhearts.net/u1