Too Much Energy [Moe, Nao]

SAWACHIKA NAO | GOD SPEAR
What the heck was this? Aha! She had a lot of spunk to her and Nao liked that, she was real into this girl and her feign which led into Nao hitting the ground with the little bubblegum girl on top of her. Well, for a moment. She did wince as her back slammed into the ground but she'd grabbed Moe's hips and used the momentum to keep her going and throw the little devil behind her with an unceremonious roll.

"Hey! That was pretty neat. How 'bout I stop playing 'round though?"

Time for Moe to get a taste of her Sanzen Koken. The three mountain tiger fist. When Nao jumped back up from her position to take up a stance she reached into her fighting spirit and flexed the reiatsu a bit to show Moe how much she was into it and attack her will. If she couldn't handle the overwhelming fighting spirt of the noble shortstack then how could Nao really have fun with this challenge? 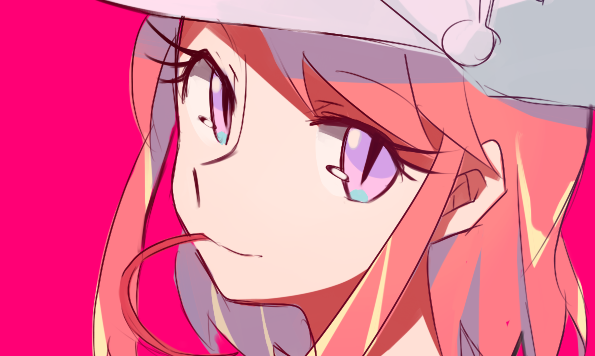 MACHIHARA MOE | The Bubblegum Oni
It was almost surprising to Moe that she connected with her little tackle, what was more surprising was that she landed on Nao and then pretty much bounced off her. Ugh, she should have been able to stick that pin and then who'd be laughing, instead, she was eating dirt again. It wasn't fair, she didn't have any cushions to soften the blow either.

"Alright, no time for pullin' punches then."

Moe scrambled back to her feet with much less grace than her opponent, and then that wave of that reiatsu washed over her. It was enough to drive most of the air from her lungs, leaving her gasping for breath just as she was trying to compose herself. But if she was gonna go down, it was not gonna be at the hands of a little spirit pressure.

Gritting her teeth, the equally noble but abundantly less-stacked shortie loosed a desperate cry and flung herself forwards once more. Her sword came around one more time, thrusting forwards as she elected to lunge at Nao to try and drive her back. Her own reiatsu came with it, though it also paled in comparison to her peer. She was the Rising Star, just right at the bottom of her climb.

SAWACHIKA NAO | GOD SPEAR
Attack her spirit, attack her mental and attack her body! When Moe came charging at her to swing at her with the sword. Nao didn't even need her naginata here, she took up her stance and was ready to show Moe her ultimate super move.

Stamping her foot and channelling her reiatsu into herself, she created two other speed clones and started to utilise her shunpo to surround Moe from three sides before lunging at her with the strike. Even if she blocked one strike the Sawachika would hit her from the other two spots. All of her spiritual pressure, all of her fighting spirit and all of her strength to thump this little rising star into the dirt.

She was pretty cool though. By the way, of the two clones the real Nao was the one attacking from the left side.

There was little time for Moe to react as Nao suddenly split into three, her original thrust being caught by one whilst the other two struck at her from the flanks. It was all over in a blur, far too fast for the peppy little upstart to manage, and then she was back on the floor with a much more audible oof. Her weapon slipped out of her hand, clattering to the floor, and she just lay there for a moment or two. She wanted to get up, to keep on fighting, but she was beaten.

"Owww. Alright, alright. You got me."

She was not thrilled at having been defeated, but the truth was that she'd been outmatched from the get-go. All she could do was learn from the experience, pick herself up (in a minute or two), and come back later to kick Nao's butt for real.

SAWACHIKA NAO | GOD SPEAR
"Hehe, you'll get me next time. For sure, for sure."

She assured. Nao's words could've been interpreted as mocking but she didn't have that kind of attitude about her. It was genuine encouragement and praise for the girl, after all there weren't many people that could beat the Sanzen Koken's trump card--as far as she was concerned.

"Tell ya what Rising Star. Let's go get cleaned up and grab some food, I'm really hungry and some nice time in the hot springs followed by a hearty meal is always good for recovery after some serious training."

The petite figure reached down and took Moe by the shoulder to lift her to her feet and wrap an arm around her shoulder. A big, satisfied grin on her face from the training session and match.

MACHIHARA MOE | The Bubblegum Oni
Moe rolled over onto her back, looking up at Nao with a mixture of newfound respect and poorly-stifled pain. She didn't really think she would beat Nao next time, not unless they didn't fight for a long while - and she had kinda enjoyed herself even if her entire being was sore. It took everything out of her to move her body and that big old lump of metal, so when the adrenaline wore off she was done for.

"You're on, God Spear. I could go for a soak and a mountain of food right now."

It would have still taken her a while longer to get up had Nao not intervened, and, though she wanted terribly to shrug it off and say that she could manage, her support was the difference between them getting to the Hot Springs anytime soon or Moe having to crawl there over the course of several hours.

SAWACHIKA NAO | GOD SPEAR
"Great! I'll pay for the food this time but next time you're paying if you can't beat me, 'kay?"

Nao challenged while grabbing her naginata and making sure that Moe wasn't leaving anything behind. When she was satisfied the Sawachika was keen to go get washed up after tumbling through the dirt and sweating a bit from the fight. Once everything was all well and done they were off to wash up and relax for a bit before getting into what'd certainly turn into an eating competition of sorts between them.