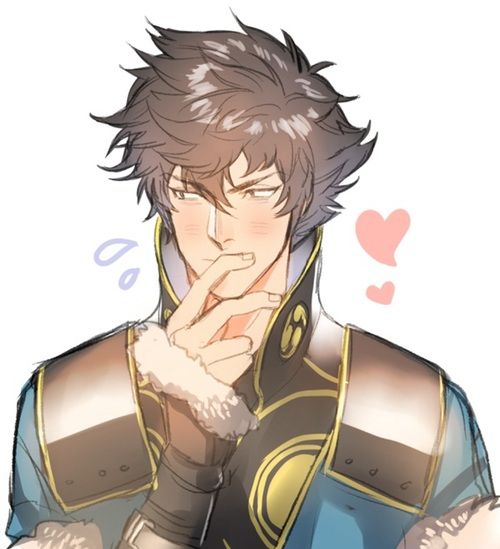 Yuzuru had not had many interactions with women, but there was a certain aspect of him that seemingly reacted quite profoundly to the woman in front of him. Hiroe was beautiful, much too beautiful to be this close to a man who had not had much interaction with the fairer sex, or interaction with people in the first place. Strange and completely foreign impulses began to spread through him like a wild fire, and as he continued to smile and stare into her eyes a particular impulse began to grow rampantly out of control.

Hiroe probably thought of Yuzuru as a push over, somebody who would probably never make a move unless if asked to, and in a lot of ways she was correct. But in this particular instance, instinct was hard to ignore, and his male instinct to lean in and give this woman a kiss was extremely hard to ignore. So hard to ignore that Yuzuru impulsively and in a lot of ways surprising himself, began to lean in for that kiss. He didn't know how she would react and in many ways the idea of surprising her gave him an odd feeling that made his heart flutter a bit, but as he continued to lean forward his rational mind began to take a swing at wrangling in these new impulses.

She was somebody he cared for, deeply, and profoundly, but the thought of doing something to upset her. Perhaps being too forward in a way that she would be against, made him hesitate slightly, and he ceased leaning in. His face grew a deeper shade of red, realization of what he was doing seemingly filling his mind, and overriding the earlier thoughts of kissing the beautiful Hiroe. Still, he had not budged from his half-lean in, and his heart was beating a million miles a minute. Did she want this? Would she be okay if he gave her a kiss? She had been egging him on to be more confidant and to try to be more outgoing, but what place did that all come from?

Was it friendship, romance, or was it merely a concern she had for a fellow student? Conflicting thoughts plagued him and for a moment he internally shouted at himself to be decisive. To commit for once on something other than choosing to come to the academy! To choose to take a shot over being a passive! So, he did something to prove that he was willing to make strides, and he continued to lean in for a kiss. It was up to her at this point, her reaction would change his action, and how he would deal with the aftermath of said action.
__________________

Hiroe wanted to commend Yuzuru for maintaining a steady gaze. Those eyes, normally uncertain and frightened, hadn't wavered in the slightest. He was doing a great job! She was about to open her lips to voice her approval, only to see his head leaning in. Huh? What was his deal? Did he faint? Did his mind crumble under the pressure leaving him in some sort of daze? Eh? Eh? Her eyes shot open like saucers as she seemed to understand his intent, causing her whole flow to be thrown off as a strong shade of red filled her cheeks.

Was he trying to kiss her!? This wasn't what she implied when she told him to stare at her. If anything, this was the total opposite. Commendable, but far from the game plan! Did she do anything to lead him on? Or was he merely trying to prove himself? Ahhhh! Hiroe raised her hands up, tapping at his shoulders to throw him out of whatever stupor he seemed to be lost in, that visible shade of red still visible in her pale skin.

"H-Hold it, Yuzuru! Layin' it on a little thick their buddy! Ya don't need to go this far to prove you can be confident, hahahahahahha," a remark made in nervous laughter. She didn't particularly want to be rude, but she didn't expect him to go soaring in for the kill!

For a moment, Yuzuru's mind had drifted into a world of fantasy, and his impulses, ones that he had never really dealt with before had caused him to make this move. To make a bold move like this was out of character for him and that is why when she tapped him on the shoulder, Yuzuru froze. Shame filled his face as he looked into her eyes, something like a pit formed inside of him, and for a moment he held his breath as he looked at her. He had made her uncomfortable, he had done something he should have never done, and now staring at her he found himself regretting a lot of things. Confidence evaporated in an instance replaced with something a bit more fitting of a man who really didn't have friends and was more suited to being alone than with other people.

Finally he began to move, leaning back, and looking away from her, the sheer embarrassment of the action that he had almost comitted to washing over him just as abruptly as shame. He had done something wrong and now she was probably scrambling to look for a way out, he felt a large weight on his shoulders, and they sagged in response. Without so much as a word he began to pack his backpack, he felt off, and extremely odd at that moment. Not something he had really ever felt before. He supposed he could thank her for that, he now understood a bit more about himself, and as he stood up he didn't look at her, too ashamed of what he had just tried to do to someone he had referred to as his only 'friend' not too long ago.

He said with very little emotion in his voice, slinging his backpack over his shoulder, and beginning to march out of the room. How could he look himself in the mirror right now or hell even play a set at the tavern tonight? He didn't really know, but all he could think of was getting as far away from Hiroe as possible, he needed to clear his head, and right now he was a mess. He didn't know what this feeling was, but he didn't like it, and being around Hiroe didn't seem like the right play right now.
__________________