Igen smiled, looking a bit ... sheepish as she went and spoke to the credit of his own accomplishments. He supposed it really WAS something impressive huh? It made him certainly feel a little more psyched at the idea of getting to LEARN this ability more thoroughly. "Aw thanks Moe. I mean... yea you're ri-HNNNN...." He thinned his lips as she rested her head on his singed shoulder, yep. Still those reiryoku burns there. Whew... yep just ignore it. He smiled. "Well hey, once I get the hang of it, I wouldn't mind showing you the ropes sometime." He reasoned with a big smile.

Though.... as she went on to talk about the pickles.... he .... stared. SHIT why didn't he think of that?! "Shhhit, uh.... well dang I wish I'd thought of that sooner..." He murmured, rubbing the back of his head with his free hand. Yea, there was no way he could get the authorization paperwork adjusted. He'd already put that shit in earlier today in advance for tomorrow. It wasn't a hard form, but it WAS pretty late. He'd have to ask someone to handle it off their shift. He furrowed his brows, considering the possibilities. Maybe the ones he made would work fine? "I think it might be a little late to get em from the world of the living." He admitted. sighing a bit before giving a nervous smile. "I'll have to just ... snag them in the morning tomorrow once my authorization kicks in..." He murmured, tapping his chin.

He paused, peeling his phone out and ..uh...frowning. "Moe uh.. how do you....?" He trailed off. Definitely not very tech savy. Well... for things that didn't involve work at least. He hardly went looking for like...specific items in stock before. He was more of a 'I'll have whatevers available' kinda guy. 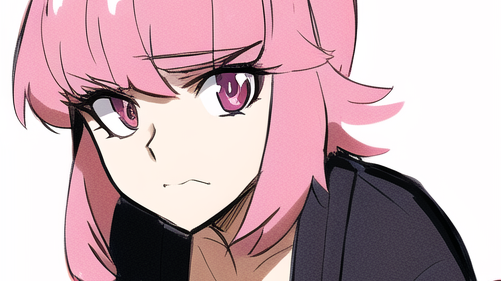 MACHIHARA MOE | The Bubblegum Oni
Moe did feel a little bad for putting the hurting down upon him this time, though it had been entirely unintentional. He had kinda burned up his arms pretty bad, she should probably try to do some Kaido or something. It wasn't like she was any good at it really, but at least she had the core concept of that down. And seeing him in actual pain did give her a little burst of energy to try to help out, so her hands raised tentatively towards the burns.

"Ya know, it amazes me how you can be so smart and so stupid all at the same time in one Igen-sized package. I guess it depends on where you're meeting Miss Shaoling and how much wiggle room you've given yourself from when the authorisation kicks in."

Try as she might, though, nothing really came of her attempts at healing with magic. A little burst of green glow, flickering on and off, but all it was really doing was wasting her own energy. Still, it paid to try. But as Igen's technological failings came up, she was quick to leap on that opportunity.

"Ugh, alright gimme it here. It's really simple, you just pull up this and then go over to here and start typing. We're looking for the best vendors for Shi..Ba..Ku..Ze pickles... Shouldn't be hard to find. Oh hey, they're popular in Kyoto. That sounds like a good place to start."

Igen sighed, relaxing a bit as Moe proceeded to help him a little in fixing himself up. The extra energy was definitely welcome with how much of his own he'd attempted to use. He closed his eyes and ....considered. "I'll make it work somehow. Not like she's really waiting for me at a specific time or anything." HE chuckled. He HAD just sortof nebulously said 'a week' was when he would be showing up again. So it wasn't that big a deal he supposed if he just wound up popping up somewhere later in the afternoon or something.

That aside, he DID smile and relax a bit as Moe leapt on the phone. Frankly even though she wasn't all that great with ...well....healing. At the very least she was giving im energy to work with, and then he could just heal his own wounds. But he uh... kept that to himself. At the very least, he got the pain under control as she helped him search. He perked up. Dang... it was THAT fast? HE accepted the phone from her and smiled. "Nice... I think.... this will work nicely. Thanks Moe!" He chimed, sounding happy as a hamster as he promptly eyed his phone and began fiddling with the search options. Now thazt he had a chance to SEE Moe use it, he started fiddling with it, so that he could learn how the UI worked and he'd be able to do it on his own in the future.

MACHIHARA MOE | The Bubblegum Oni
“I’m sure ya will, you’re kinda reliable like that. I think. Or whatever. Get the best ones you can find too, I don’t think she’d appreciate something halfassed. I know I wouldn’t.”

Seeing that her attempt at healing -whilst not immediately impactful- was not becoming a cause of concern, Moe beamed with a cheery smile at the accomplishment. She was actually kinda doing it. Just a little more control and maybe she could manage the real thing. Handing the phone back, she turned away as he thanked her, waving a hand dismissively in his direction like it wasn’t a big deal. Not that it really was but

“That’s what friends are for, dummy. Kicking your ass and fixin your problems.”

As Igen began to tap away at the device again, Moe’s curiousity got the better of her and she turned back around to face him. Leaning in again, she went to peer over his shoulder - this time taking special care to avoid any injuries.

“You’ll wanna go into the settings and change that… Oh, and maybe up the brightness a bit too… It doesn’t have to be like as dingy as possible… No wonder you don’t know what to do with it…”