The Page One of My Youth [Kyo, Solo]

The Page One of My Youth [Kyo, Solo] 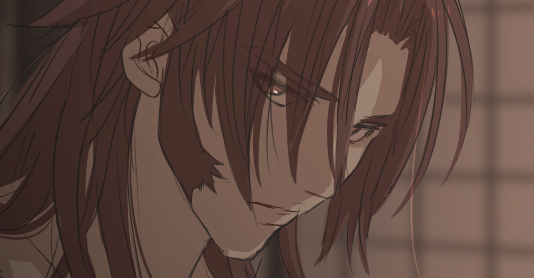 SAWACHIKA KYO
Jinzen. The meditative training that any respectable Shinigami regularly performed, and that Sawachika Kyo was currently undertaking once again. For him, however, it was something of a more irritating prospect. He had heard from his peers that the zanpakuto's spirit took on countless forms, and from his teachers that it would be able to communicate with him so he could learn from it.

But Kyo had never had any luck on that front, no matter how often he spoke with his zanpakuto. He hadn't learned its name, its nature, hadn't even heard a single word spoken from it. His inner world wasn't some fascinating other realm, and the only thing in that empty white world was a small black ball that seemed to roll into him incessantly. Kyo had naturally ascertained that this was his zanpakuto spirit, but he didn't know anything else about it.

He'd talked with it, thrown it, pushed it around, led it on quite a long trek. But none of that had seemed to work. And now, once again, Kyo was simply sitting in his inner world, staring down at the small black sphere as it rolled into him.

"I'm getting a little tired of this. You've got to want something."

Kyo had gotten used to that. He'd gotten used to hearing nothing at all when he spoke to his zanpakuto, and most of the time, he just sighed to himself, looked up at the empty white sky, and took a little bit more time before he left his meditation. But today was going to be different. He wasn't going to put up with this anymore. He clenched his fist enough that it hurt, and as he did so, he felt the ball ram into him a bit harder than it typically did. That was new.

Picking up the small black ball and staring at it for a moment, Kyo lifted it up, then all at once threw it onto the ground with all his might. He was a pretty strong guy, and he'd thrown it extremely hard. He'd expected it to maybe sink into the ground, crack, something. Instead, it simply bounced off the plain white floor, and slammed back up into his face. That had hurt a whole lot, and he gritted his teeth as he kicked the ball away.

Ah, man, he was bleeding.

SAWACHIKA KYO
For a moment, the ball did nothing at all. It simply sat, unmoving, and that in itself was unusual for it. Then it began to roll once more, but this time, it didn't move toward Kyo. Instead it rolled away from him, off into the distance.

Naturally, Kyo followed after it. It was pretty easy at first, but then it got harder. The ball moved quicker, and soon he was at a sprint, then needing to use hoho just to keep up at all. This was new, and if it'd been a while ago, he probably would have just let it go.

But he couldn't afford to do that, could he? The blood dripping into his eye didn't even bother him, and he just wiped it off, pushing himself further, harder, until he could feel his body straining while the ball simply continued to pull away.

He'd be fine. He pushed himself one last time, even knowing he wouldn't be able to keep this up again. One last step, one leap toward it with his hand outstretched, and his eyes didn't close until he hit the ground, his hand failing to catch the ball despite his best efforts. 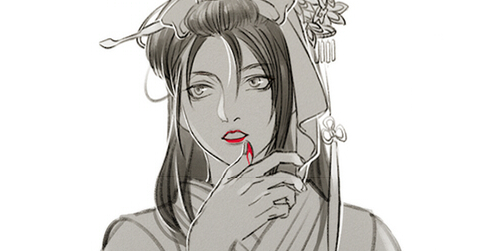 Even if Kyo had hit the ground, his hand didn't even have time to follow the rest of him. Instead, it was caught by another, a sensation that he certainly wouldn't have anticipated. A pretty figure, hair jet black and with bright red lipstick, looked down at him with a disapproving expression, practically tugging on Kyo to stand up.

"Now stand up. Really, it's one thing to do your best, and I certainly did appreciate your little efforts to get something out of me, but what's all this chasing business? Does a man run desperately after something he can't catch? No!"

Tutting in an almost matronly way, the figure shook its head, continuing to pull Kyo to stand up. It was decidedly a masculine voice, though the appearance certainly didn't give much of that impression.

"A real man knows that things will come to him so long as he tries! All this diving about, looking like such a mess, where did you even learn something like that? I certainly didn't teach you anything so pathetic!"

SAWACHIKA KYO
In all the time he'd spent speaking to his zanpakuto, he'd never heard so much as a word from it. Never heard anything but his own voice in this empty white world--

But, as he opened his eyes, he realized it wasn't even the same place that it had been. The white void had been replaced, and now it was a lovely autumn hillside, leaves floating downwind as he looked up at the spirit that was speaking to him. Despite the situation, Kyo couldn't help but laugh at the sight. Go figure.

"You haven't taught me a thing, you idiot. All you've done for the past two years is roll into me like it's going to motivate me."

Standing and brushing himself off, he looked down into the eyes of his zanpakuto spirit, expression a bit more positive than it had been. This certainly seemed like progress, at least.

"Let me guess, you're not just going to introduce yourself, are you?"

???????
"Hmmm? Now why should I introduce myself to you, mister? Honestly, just because you're confident and proud, you think that's enough reason for me to just go out and share my name? Don't you know, Kyo-kun, that a real man only shares his name with someone who's earned it?"

Kyo might have been cheery about this situation, but his zanpakuto spirit certainly wasn't. His tone remained disapproving, his eyes narrow and a faint frown still crossing his lips. Honestly, was this what he'd conveyed?

"Now, Kyo-kun, let's put some thought into your situation. What's different now from any other time? Why do you think we can finally have a nice little conversation here instead of me just bumping into you hoping you'll get a little rough?"

His gaze was expectant, and he clearly wanted Kyo to actually think of an answer here. It wasn't just hypothetical on his end.

SAWACHIKA KYO
Mm. Kyo frowned at that, having hoped this exchange might be a little bit more friendly than this. He wasn't under the impression he'd been doing anything wrong, but he also knew exactly what his zanpakuto was referring to. What had changed? He knew the answer to that one without even having to think about it.

"I haven't had purpose before now. Just been going through the motions. Now I'm motivated, and I'm not going to quit. I'll do whatever it takes!"

His voice was firm, his eyes filled with the fire of manly passion. If he had to prove himself to his zanpakuto, then he would. No matter what it took, Kyo would simply meet the challenge head on.

"Now give me your name, or tell me what I have to do to earn it!"

???????
The zanpakuto said nothing at first, but after a moment, he offered a grin. His fist then flew out, slamming into Kyo's chest with a pretty impressive amount of force.

"Very good! I believe you, Kyo-kun. Not because of your words, of course, but because I've been watching you. I've seen you doing your best, dragging yourself through all that training. Good work so far! But it's not nearly enough, so I'm going to expect a lot more out of you."

Letting out a loud, boisterous laugh, the zanpakuto spirit looked up into Kyo's eyes with a confident grin, studying his features for a moment or two.

"My name? Fuurinkazan. Now you better put that to good use, otherwise I might have to stop listening to you. That wouldn't be good for either of us, you know?"

SAWACHIKA KYO
Fuurinkazan. Kyo certainly understood the more immediate meaning, but that wasn't what it meant here. He could sense it, in a way that was difficult to fully describe. He left his inner world, and held the zanpakuto in his hand as he stood and walked into the training ground he'd built for himself. One breath in, one breath out, and he held out the blade as he spoke out in a powerful tone.

The Brilliant Splendor of a Man's Ethics. The sword in his hand all at once grew into a proper spear, which certainly brought a smile to Kyo's face. He'd have been disappointed in anything else, really. He took another deep breath, focusing on the weapon in his hand. What it did, its nature, everything. He twirled it once, then faster, an act that came rather more naturally than he expected it would have with his usual spear, and then all at once stabbed forward with the spear toward one of the targets.

From the tip of the weapon flew a beam of blinding white light, which struck the target and left a sizeable crack through it. Hm. That wasn't bad at all.