A Reminder of Time [Liltotto/Johann]

A Reminder of Time [Liltotto/Johann]

Intriguing news; her end of the branch had a new administrator, one Johann Arant... That surname definitely struck her as familiar. Though she definitely had seen the descendants of those she had thought had died out, that was definitely not a name she had expected to come back up again.

Inviting the guy for coffee was a simple formality, but she did want to get a read on him, get to know him and all of that. They would be working together for the foreseeable future, might as well.

She was lounging at her usual quiet cafe around the given meeting time, it was just a matter of the guy showing up. 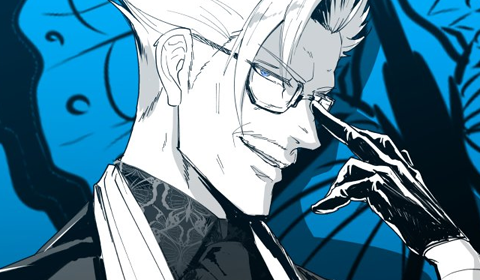 JOHANN ARANT | FORGOTTEN PATRIARCH
Punctuality was something he always tried to abide by. So, keeping an eye on his watch, he entered the cafe only a minute or two before the scheduled time, taking a brief look around. It was a little later in the morning, so there were some occupants and customers, but, he quickly spotted the "young" lady that wanted to meet with him.

Adorned in a simple striped sweater vest, a white long-sleeved dress shirt, tie, and dark blue slacks, Johann made his way over to where Liltotto was sitting, taking his seat without a word, his hands resting in his lap as a worker came over to ask what they wanted. Ordering a simple black coffee, he smiled to the worker, before turning back to Liltotto.

"Good morning. Normally I would say 'Good morning, young lady,' but after reading your file, that hardly would seem appropriate, now would it? How are you today, miss Lamperd?"

She was sipping down a small mug of English Breakfast tea when her eye caught an unfamiliar presence entering the cafe, a rather dapper older gentleman that she'd think was pretty overdressed for a cafe visit if not for her assumption that he was the query she was meeting with today, concluding when he sat across from her.

"Ahh, someone's done their homework," She'd state with a sense of benign amusement to his statement, clearly with an impressed air, "I'm doing as well as I can, and I assume you're the same. Johann Arant, yeah? That family name definitely takes me back."

Stirring her tea a bit with a spoon for no discernible reason other than some manner of fidgeting, she'd rest her head with one hand on her chin, looking at him with dull yet interested eyes, "Heard you came out of retirement in reaction to recent news. Don't take this the wrong way, but i'm curious of what you can offer that we'd be lacking in. Despite my rank, I have taken up helping with training our forces, is all. I'd want to know what you can offer."

Her voice held nothing but sincerity and interest, despite it's flat delivery.

JOHANN ARANT | FORGOTTEN PATRIARCH
Hm? Now, that was curious. This girl knew of his family? Johann raised an eyebrow as he took a quiet sip from his coffee. As far as he was aware, the Arant Family had simply faded away into obscurity. The passage of time was kind to little, and certainly not him or his legacy. So, to hear that someone remembered the name was of particular interest to him.

"Oh? You know of my family? How so? As far as I was aware, our name was hardly mentioned among Quincy these days, much less the rest of the world."

However, his eye twitched and he felt a stinging irritation as she asked what he had to offer. He knew that there was no ill intent behind it, but he still couldn't shake that damnable pride at times. Closing his eyes and taking another sip of his drink, Johann took a moment to calm himself before he answered. His pride was something of little importance and value these days, and so, he intended to purge it, at least temporarily, from his thoughts.

"While my skills may be a tad rusty compared to my prime, I am still proficient in all traditional Quincy techniques and abilities. Still have some to learn with the modern applications and understanding of Ginto, but my point stands. My abilities also give me ample room to teach struggling archers with creating a bow, or ensuring that close-ranged combatants are able to have competency in ranged combat."

After all, the Quincy were a race that, at least in his time, were hailed for their skill in range combat. He did not expect every melee fighter to suddenly upturn their entire way of fighting for the sake of tradition, but he did, at the very least, expect them to be competent in a vital form of combat.

A gentle 'hmm' would leave her in response, trying to place a good answer to the question, "Don't recall many personal meetings, but it definitely was a name that made rounds in the old Vandenreich. But yeah, that was forever ago, and I definitely wasn't a flattering pick for a wife for anybody."

Her shoulders rose with a slight shrug as she stated such so casually. She didn't bother pointing out the fact that she and many others were being prepared for combat their whole lives and many of those wouldn't have gotten to an age where such relations could fruit. That irritated twitch caught her eye with her questioning - she didn't think any lesser of the man for having stock in his abilities and competence, but it was something she'd ask of anybody coming in, and once she received an answer she'd place the cup down.

"Alright, not bad. Lemmie think." She'd tap the end of the spoon to her lip, before pointing the utensil at him, "Apart from physical or skill prowess, what do you feel is important to teach to younger or newer members? What sorts of values would you want your students or men to uphold?"

She'd tilt her head a little to add, "I hope you've also taken to account that not everybody joining nowadays is a Quincy, as well as a good many that are wouldn't respond well to learning off purely traditional methods. I'd want to know what you're thinking of doing in those cases, too."

JOHANN ARANT | FORGOTTEN PATRIARCH
Ah, that was the extent of her knowledge. Perhaps he was expecting too much. Disheartening, really. The old man's eyes briefly lost their stern and formal look, for a moment becoming wistful and gentle. But, he said nothing of it, merely taking another sip of his coffee, drinking deeply to let the bitterness push his sorrows away. In a way, it calmed and distracted him, giving him time to think about her next question.

It wasn't an easy question to answer, even for a man like him. Many of the values he wished to instill in the new generation were more personal than anything. Setting his cup down, he put a hand to his chin -- the values he would want his students to uphold, hm?

"Difficult question. I suppose, if nothing else, I would want my students and men to at least have a respect and understanding of the old ways, even if they do not incorporate it themselves. I'm aware of the changing times, and I do my best to adapt to them, but there are fundamentals to what the Quincy and Vandenreich are that deserve to be upheld, or, at the very least, considered, remembered, and thought of."

He took another drink as he thought of his answer to her next question. He was aware of the Vandenreich's new guidelines, accepting all races that entered -- which, for some reason, included a Shinigami. It was not a change that he entirely approved of, but one he would respect and try his best to understand.

"As far as the first part goes, I'm well-trained in fencing and aikido, as well as general archery, all of which I can provide ample training for. As for the second part, that is something that I will need to handle myself when the time comes. It's a case-by-case basis, and not every reaction and student is created equal. As I said before, at the very least, I wish for them to understand and respect tradition, even if they do not follow it."

How strange, an old man being questioned and almost lectured by a woman who looked three times younger than him. Nevertheless, it was important to know these things about one's colleagues if their collaborations were going to succeed.