a walk in the Forest (no death/ open )

zetsurin started patrolling the Karakura forest. Her mind drifting in and out of consciousness. zetsurin was bored not having nothing to do and no money to play any games in town. Dragging her Zanpakutô on the ground. Zetsurin body was slouched forward as she walked aimless. "hmm There is nothing to do maybe i'll get lucky and find some thing fun out here."

{Inner World) higeki: sitting in her hollowed out tree. "Why don't you just take a napp.... it's a good way to pass the time. If we gotta do this can we at least look out for animals to? I'd like to find a new pet" higeki was looking over at kigeki tapping her two index fingers together slowly. higeki eye's slightly less sad looking than normal"

Kigeki was looking at a patch of flowers the smell was lovely. She picked one and put it in her hair. "No way I'm taking a napp.. But I guess we can try getting you a pet." Picking some more flowers and handing them to higeki. kigeki was smiling as she look at her other self. " do you know what higeki? i love you" hugging her tenderly.

Andrew yawned softly as he looked up at the sun. He had been napping underneath a tree after having read a book about French pastries. If there was one thing he had always found interesting about the French it was their disregard about butter and sugar. He recalled a long time ago when he had went to France if for anything to try some of their pastry. He had been drawn to how their baking style worked and wanted to learn as much as he could when he had found himself out in the cold in the beginning. Cooking was his one way to ensure his sanity would be kept in check and the hollow inside of him would not take over his body. He had a series of folds in the well worn pages, choosing which recipes he wanted to try first when he had the chance. "I think when I get back I'm going to work on some eclairs," he said with a happy expression on his face.

The vizard stood up, dusting himself off as he walked back through the forest when he saw someone in the corner of his eye. Turning, he saw a familiar face: the girl he had seen at the restaurant asking for grilled fruit as well. Smiling, he walked over to her and nodded his head in respect. "Good day to you ma'am, how have you been this day?" He had a polite tone of voice, glad to meet a familiar face that did not wish to strike him down for what he was.

zetsurin was surprised to see the man again. she was all so happy to see a nother living soul out here. zetsurin lifts her Zanpakutô up sheathing it away at her side. she was smiling " hi i am doing fine . Kinda bored so i am out here hunting for a pet. So what brings you out here? zetsurin seen a book in his hands he must have been out here for peace and quiet.

zetsurin was standing awkwardly her hands folded behind her back and her left foot behind her right heel. zetsurin was curious about this. she tilted her head to the side "O was you out here reading? " The forest was a nice and lovely place. the wind blowing thru the trees and the clean air made this place really relaxing. The animals of the forest can be heard in the distance .Filling the air with beautiful sounds that was like music to zetsurin
__________________

Hunting for a pet?

To Andrew a pet meant something conventional like a cat or a dog. He had brought in a cat to help with maintaining his sanity when he lived alone in the land of the living. He almost had a quizzical expression on his face as he wondered how she would be able to do acquire a pet? From as far as he could be able to tell on her person she only had her zanpaktou by her side. He didn't see much in the way of a leash or even a net. However, his attention went down to his book as he looked at his cookbook again. Smiling, he showed it to her. "Yeah, I've been catching up on some French cooking techniques. Lately I have been working on the idea of making some eclairs. I also have been considering on creating some puff pastry as well. The pastry isn't so hard to make, just got to be really vigilant on the baking because those things can become as black as coal if left to their own devices."

zetsurin's eye's go big and glossy thoughts of sweets dancing in her head.

1 of witch was a cream puff running away from her in a field of flowers. "so your a patisserie than? ooo that's gots to be the coolest job ever! so do you got a bakery of your own?" she ruched jumping to conclusions.

higeki: "air head... he naver said he was one. and your missing some thing that is key..."

kigeki: what is their to miss ? he is a nice guy and likes sweets things

kigeki: "your paranoid... he is kind trust me i can till " kigeki makes a peace sign"

"Among other things yes. I worked in plenty of positions in both the back and front of the restaurant."

As he said that, he remembered the first job he had to do in a restaurant: clean and prepare vegetables. He did this every single morning to prepare for the incoming crowds in the Rukongai. Even today he takes it on himself to aid in the preparation of the food. When she asked him about the bakery, he shook his head. "Actually no, what I do have however is a pair of restaurants that I had been keeping up in the United States. Both restaurants do have fully functioning areas for baking to boot." Andrew smiled as he then began to think about what kind of baked goods that he had encountered. The vizard had very fond memories whenever he cooked. "Well I actually my taste is various among the world. I do love a good French pastry like an eclair, but I also love their sweet and savory crepes. Italy always had a good Tiramisu, but you got to be careful when it comes to the cake portion. If it has plenty of coffee and if you are not accustomed to the caffiene level it could easily knock you back a couple feet. But if I were to choose something close to my heart, I honestly I would have to say that funnel cake is pretty high on my charts. Though it is fried, if prepared properly it is a very excellent dish and it is good with powdered sugar and fresh fruit." He smiled cheerfully and then remembered something extra. "Although I will say that ice cream is always good no matter the time of the year."

zetsurin gives him a thums up 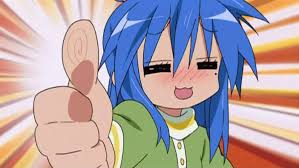 Andrew remembered fondly about instant noodles. Though it wouldn't be the same thing as something like a hamburger or a lasagna, he still liked having a simple cup of noodles to help satisfy him. "I like instant noodles as well. I remembered a long time ago when I used to use a mix of plain rice vinegar and a little bit of hot sauce. It gives a good mix of hot and sour when used on chicken flavored cup of noodles," he said happily. During the first few weeks of his exile he knew to keep from making too many types of food unless if he were to draw too much attention to himself. But as he thought about sweets, he then had an idea about it. "Well, in some cases I would say that the best way to do it is to use some moderation. However, I thought of a much more logical way of doing it and use this plan: make it last because you don't have much money." He then put his hand in his pocket to show a handful of money. "Say you have so much money to spend on groceries and you keep seeing that something you are really hooked on is burning through your money. So instead of giving up on it outright, buy it but try to stretch it out as much as you can. I remembered getting a pint of ice cream and making it last for about a week."

zetsurin was listening to every word. but than..zetsurin ... was in shock as if paralyzed with fear.

"It's actually less about self control and more about trying to get all of my money's worth."

He put his money back while still recalling the first few decades. He needed to stretch everything out to the best of his ability without getting sick from expired food. But he continued to recall as he looked up at the ceiling. "But there is a lot of truth however to moderation. If you swear off something for good, then you got to be really careful. You would not believe how many times I have seen people "fall off the wagon"," he said while doing the quotations with his fingers. For him though falling off the wagon wasn't just alcohol. If there was one person who had sworn off sugar or even meat and a single drop touches their lips, then he had to be ready for a potential bender of all benders with the people nearly devouring anything that is their true desire as if they were a long forgotten friend they wanted to see so much. "So other than the cup of noodles, what other foods are you interested in?"