A sound could be heard across the Forest. Nikusui was in her Aimi Shizuko form right now as she rarely shows her true self. She has nothing to really do in Thanatos Centro and boredom was plaguing her mind. Aimi had successfully and with little effort entered the Living World thru a Garganta. "Hmmm how lovely every things is here...time to change that."

Looking up at the clear sky of blue there was a flock of birds soaring overhead. Pointing upward with her right index finger she charges a cero and fired it. The cero could be surely be seen from far away and would completely disintegrate the entire flock in one shot making ablack dust rain down. “AND now its even more beautiful!" she would dance and skip in a circle as the dust rained down on her. "LA lA LA. Ring around the rosie, A pocket full of posies, Ashes! Ashes! They all fall down!~ " she would fall backwards and lay there kicking her feet in the air laughing. "HA hahahahaha... aaaaa" she could feel something coming closer to her. But who could it be? No who doesn't really matter as long as their fun...
__________________

Aimi could feel the energy gathering as well all the clouds in the sky was rolling in one direction. The same direction she had felt some one in. "how interesting." Aimi said with a devious smile on her face. In her own mind she was thinking. 'So I must assume that whoever it is found something offensive about my little display.'

Aimi laying on the ground it would appear as if she just sunk into the dirt. But in truth she had Phased thru the solid matter of the
earth itself and combining this with her Sonído which would not produce a sound she would traveling downward under the ground. By doing this she quite effectively avoided the attack on the surface. Without a doubt the land where Aimi was laying would now be scorched by Nue's chaos blast as well would have
left a small crater.

Aim would lay underneath the earth suppressing her Reiatsu
tell Nue had got to the location. Than using her sound less Sonído she would flow upwards towards the surface and appear right behind Neu. Aimi would have a cold expression ash she won’t to piers thru Neu's back aim straight at the soul sleep. she would be watchful of Nen and if he made even the slightest move to counter it she would use Sonído instantly moving in front of him and unleash a full force punch to his abdomen combined with a bala before he even had enough time to halfway complete his movement.
__________________

Though Nue's acid like blood was burning away at it Aimi's face would remain Cold and unmoving... But that is not all Nue had done to her as his sword hes stabbed Aimi in her underarm and with a burst of energy blowing her entire left arm off from the inside. This man was quite strong and though she did not show it Aimi was feeling a great deal of pain.

Nue looking at her said. "Are you done yet? " Aimi keeping her sense of cool razed up her left hand placing it above her forehead, she would rip the flesh from her own face. Aimi did this to stop the acid from burning away at her anymore. "AM I Done?... how could to ask such a thing? The way I see it we are just getting started." though her lift hand would not move seemingly out of no where a scythe would appear in her hands. In truth Aimi was hiding her zanbato within her body as she can control it size and shape. “Now than lets play." aimi's right arm and flesh would regenerate.

Aime swinging the back of her scythe at Nue only using her
lift hand. She was hoping he would try to avoid it because the moment he moved she was going to use Sonído and go fore feet from Neu's right side attacking with a horizontal slash at Nue's arm using her momentum making the cut stronger. Then immediately she would jump back. Aimi needed to keep her distance from him for he was a lot stronger than her. If he did not even try to avoid the bashing blow at all it would most likely do little to Nue.

Aimi could see Neu's hand reaching out to grab her scythe.. Nue had shown how tough his body is by taking a punch and as far as Aimi could tell it did not hurt him in the slightest. That being said... he is good bit slower than her. If she was going to try to beat him she would need to play to her own strengths.

Aimi would do nothing to stop him from grabbing her scythe as she would just increase the flow of Reiryoku to her right hand. Nue's blade now lunging at her Aimi would bend the shape of her scythe’s handle allowing her to move left without letting go of it. Twisting to her side she would avoid major injury but his sword would cut a two inch deep gash across her chest and breast. Aime's face would twitch from the pain but she would not stop or hesitate. Using her right hand she would fire a bala with a high spirit concentration at Nue's head. as she turns her body Neu's sword that was steel cutting into her chest would slice in to her right side aswell. Immediately after firing the bala Aime grips her scythe with both hands pulling it free from Nue’s holded and using Sonido to back away.

Her right hand clinging to her clothes so that Neu would not see her bosoms as the cut had left her top loose and falling. Her clothes wore completely blood soaked showing her injury was bleeding profusely. “I think its time for us to stop playing don’t you? " Taking out a small handheld green thing she would pop a tablet out of it into her mouth and showing an odd form of courtesy throwing a tablet to Neu. "Don't worry it's not poison. It is a MRT... food I don't know about you but I’m starving and If we are going to do this I prefer not to be ..." what she said is true the tablet is nothing more than food. One is enough for a normal person to not feel hungry for a whole day.

"Now than..." Aimi sliding her left hand up onto the blade of her scythe “Devour them and leave nothing behind my Corporeal necrosis." once those words was said her Reiatsu would sky rocket and form a thick red blood mist that would surround her. “I want you to know I like you. Your my kinda Guy and so you know My real name It’s Raiko Mischevang." As if it had a life of its own the mist would launch out at Neu and try to grab him with 5 tentacles one fore each arm and leg as well as the torso. The mist would also have 4 heads that would try biting in to Neu if he lets them get to close. 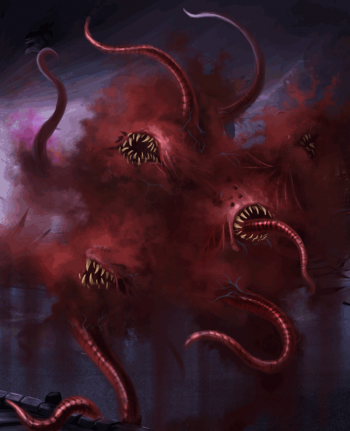 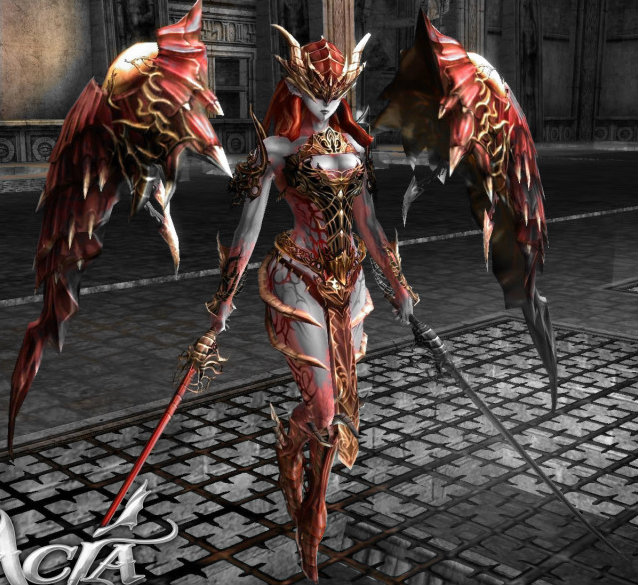 (Raiko's Resereccion but with out the swords or any weapon unless she forms one.)

The blood missed would subside after Neu's attack on it. fading away as the implosion had ripped it to pieces. "I am sorry for that. I have absolutely no control of her that beast. It is embodiment of my Reiatsu... But it’s little more than a primitive animal." her voice would sound cold like steel. Raiko her self was standing several feet away from Neu. Seeing what she could only think was liquid metal she could only assume that his power was similar to that of a rather famous caption named Byakuya... Raiko had never seen powers like this first hand so she was unsure of its details it.

Raising her left hand up her would charge a full Cero in which she would fire Neu hand not even tried to doge all her attacks up tell now. So she taught it safe to assume this time would be no different. In the event that Neu's liquid metal tried to act as a shield and protect Nue she would use a mid speed Sonido in the attempt to land one of her Devastating punches on his back right on id soul sleep. This punch is one of her powers and can smash 6 ton cub of steel into pieces but is weekend by Nue Reiatsu. She would do this knowing nothing of Nue's 360 degree sight
__________________