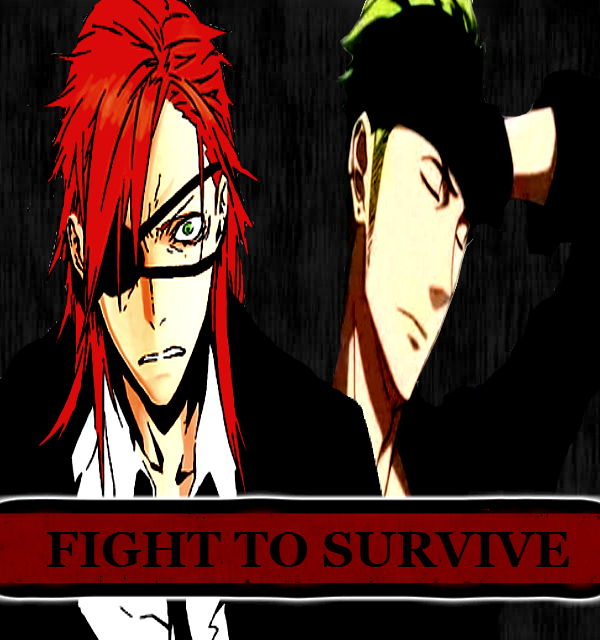 Wolf sat upon the cold bench of the seireitei, it had been almost a month since he had last seen this place. As he looked around the empty white walls of this place shut him in, this place was like a box, a cage ... but is was the cage he loved. Wolf knew this area well, from the first time he had truly been a shinigami the first time he met his partner .... it all happened here. Wolf lay back through this month so much had changed about the man, he was almost unrecognizable. Be it the newly dyed long red hair or the eye patch laden across his right eye, a battle scar he would not soon forget.

The man that stood in front of wolf wasn't one he really knew, the blonde hair of the man seemed familiar but Wolf couldn't place his finger on it. the man stood the bandanna upon his head holding his short blonde hair in its spiked way.The man looked down to wolf his eyes full of the deepest darkest aura something that wolf only felt truly once before ..

The world around him changed morph grabbing him and pulling him in, it was like Alice being pulled into the rabbit hole .... and there was no way out now. As he landed on the cold dirt ground this man stood there, from his fur coat he took out a cigarette. Lighting it he through the packet to Wolf the cold empty stare in his eyes. As wolf took one he got up unleashing his sword and laying it on his shoulder as he lit the smoke. With a glare wolf spoke for the man across from him to hear.

Falling away, the true power of the wolf

The landscape around the 2 was desolate a forlorn wasteland, nothing but sand and rubble. Wolf looked around surprised, so much had changed here. The inner workings of his mind played back upon his last visit here, not a pleasant visit to say the least. As he watched the Man in front of him draw the sword he knew as his partner he yelled to Wolf

You were weak! No matter what you did you couldn't fight it, you were nothing. You made me sick!

The words pierced through wolf, this was his partner ... his freind. Wolf snarld at the words the grip on his own blade tigtened, his teeth grind ed and as his blade fell from his shoulder he aimed the tip yelling as the massive wave of pure black reiatsu shot at Fenrir the intent of stopping this "impostor"

As the wave came close to Fenrir he looked at it and moving at monstrous speeds were gone. Within the next instant fenrirs own blade sat tip on wolfs neck. As he leaned in he said the words that Wolf would truly remember forever, the words that truly showed the difference in power between these 2 titans.

Pray tell, why wont you die?

The earth around him began shaking the massive cracks braking the ground bellow. Then from bellow something broke free. The massive Fox began to stand its 9 tails lashing out smashing though all the rubble around them, it stood taller than most sky scrapers, a truly massive beast. As if showing its dominance it let out a massive howl the sound wave alone destroying some of the landscape. Wolf jumped back letting his sword dropped he yelled his own words of power.

but no salvation came, the blade dropped to the floor with a look of disillusionment Wolf staring as he knew that this want right. From the top of this massive dogs head Fenrir let out a massive laugh, the man had made himself comfortable laying upon the brown fur. With killer malice he looked down upon wolf speaking his words.

That's not going to work this time wolf, That isn't fenrir, i am. So let me ask you can you fight, even without my strength?

With a swift move the dogs massive paw cam swiping through everything it touched. It smashed whatever lay in its path, its true target though ..... Wolf

The darkness recedes, dawn of a new day.

It had shocked fenrir a bit as he watched bellow, it wasn't possible ... how? The massive paw of the dog had been stopped sitting in the middle of its paw sat a fist, the blood trailing down the arm .... wolf wasn't done yet. Fenrir rose as wolf began to move, he ran along the remnants of what were building. With a shout Fenrir pointed to wolf yelling his commands to the fox bellow.

the black mass of reiatsu slammed towards wolf and as it hit it even ripped off his righ arm and a bit of his torso, the blood now pouring from him. But wolf would not stop as he came to the head of the fox he drew back his left fist, and at that point he sent a massive hay maker towards the man in front of him. The sound of flesh meeting steel, the attack was blocked the sword of fenrirs now digging into the hand of wolf, but still he refused to relent.

WHY WONT YOU DIE!

the man leaned in the blood was pouring from him, within seconds he would drop even die, with his right arm now missing he knew he couldn't last much longer. As Wolf looked into the eyes of fenrir he let the words fall from his mouth whispering for the other man to hear, for him to know just why wolf fought why he couldn't back down.

cause i don't wanna.

The wold seemed to go black for a moment drawing him into it forever closing the curtains.... but something happened. As he sat up he noticed his arm had returned the trail of blood gone. He lay against the rubble behind him as he turned to his side there sat fenrir staring ahead into the distance.

Are you sure you can defend this body?... can you win?

Wolf looked a bit of happiness returning to his face as he realized he had his partner back. as he stared into the sunset the thoughts racing though his mind he let out the word fenrir needed.

The soul stretched back into its body, wolf sat on the same bench.... but he wasn't the same. something sat within him, a power ultimately unleashed. He was strong ...... he was the wolf.