Faith had blocked off most external contact regardless of who said it at this stage but as soon as Tyler whispered into her ear, she spun round and fell onto her behind, startled with her scarf pushed up covering her nose and one eyes from rubbing her face into it. Upon realising it was Tyler, Faith leapt forwards and hugged him tight, burying her head into his shoulder but remaining completely silent. She knew she didn't need to cry about anything if Tyler was here. Instead, she spoke to apologise.

Faith was never much of a talker. She found her own voice was a hidden entity from herself that was only ever needed to be used in dire situations. She felt that now was one of those times where she had to apologise. However she says not a word to the baker and ignored him. In fact, she ignored everyone in the room other than Tyler. Her grip was tight and wasn't ready to let go anytime soon. She just clung to him and kept her face out of vision. This was probably causing a bit of confusion and worry to onlookers, but Tyler should know how to deal with it. Right? He has lived here much longer than Faith had so he must have some idea of what to do. He always knows! Faith remained silent for a few seconds, waiting for some sort of response. 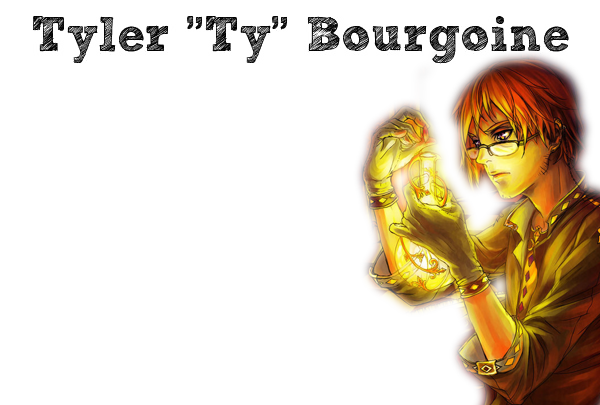 "What do we do her-- Oops, my bad..."
Alchemist Tyler "Ty" Bourgoine
人間の錬金術師

Tyler watched, smirking as she fell backwards, stunned by his whisper to her. It was just too adorable to see her like that sometimes, but what actually surprised him was when she lunged onto him and clutched him tightly. Now at this moment, Tyler's face was a little red as he wasn't expecting something like that, and he used to have a huge crush on the girl when she was alive, so his heartstrings tugged a little before he returned to his normal self. He noticed the people around the bakery start to stare, as well as the upset baker as well, so Tyler decided he'd calm the atmosphere a bit and go to what he does best. Act like that lady-killer he tends to be...

Taking the big brother position, Tyler placed his hand atop her head and patted it softly, as to reassure her that everything was okay. Her hair was soft, and smelt nice. She must have used the shampoo that he bought her a while ago to make sure she took care of herself, but even then Tyler doubted she'd use it correctly. Maybe she's finally understanding reading instructions well and decided to do what the label said. Either way, staying inside this bakery for this long was getting a bit awkward.

"Come Faith, let's depart. I'll treat you to something later if you don't run off this time..."

Tyler was hoping she'd have calmed down by now and that she would be willing to depart. He didn't like the gaze the Baker had been giving them since he walked in. A genuine smile was on Tyler's face, as he awaited for Faith to react to his statement.