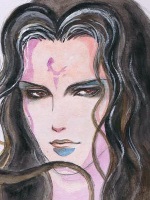 Seeing the world in the colors of the sun all but scalded Kudlak's tired eyes. The great white walls of Shinigami fortresses and pale towers abound guarding their ancient city seemed nearly to glint with mirror-like incandescence. It was a wonder that he could suffer it; skulking amidst one of the hilltops and on the fringes of an old fortress, there stood a raven-haired male with no Zanpakuto visible on his person. There was only a small silver rectangle dangling from his red sash... A ruler, though its marks were divided neither by centimeters nor inches.

His back was leaning against the rails of a great wooden fence enclosing the fortress' courtyard. Gigantic cherry trees that shed pink petals year-round covered the place, interrupted only by enormous grey tree-trunks that had died in the ravages of time. Although the old fort's gardens housed beautiful plants, a sense of neglect and unkempt flora also left this place with a certain ugliness. Unlike the tamed acres of sprawling concrete and gleaming roof-tiles that covered Soul Society, this was one of the few places in noticeable disrepair.

The Shinigami wore most of the standard uniform, but strayed from it with many golden bangles and heavy necklaces, interrupted by thick crow-feather plumage and hanging orbs of polished onyx. His oddly adorned appearance almost befit that of a witch doctor's, especially while a broken opera mask of solid gold obscured over a third of his somber visage.

A faded scroll of parchment was stretched between the Shinigami's hands; beside Kudlak, a pile of similar scrolls stood, all old pieces containing Kido techniques that were largely outdated. He had posted flyers around the barracks and mess hall, calling for a meeting of any Shinigami interested in Kido- and so to that end he brought his favorite collection of spells that were obsolete, fraudulent or just plain old, so aged that a papery scent of dust and staleness hovered in the would-be fresh air breezing over the walls and through the trees.

Kudlak had 'called' the meeting but it wasn't remotely a formal occasion. Only his Kuchiki name served to give any command to his advertisements - lacking rank or affluence, the recluse used his surname to perchance allure a new acquaintance or two into his company. "It's been eleven years." He muses aloud, speaking with only his own company in sight.

Half-lidded eyes darkened with prolonged fatigue and faded by cynicism turn skyward as the mage ponders his purpose here. "Who will turn up, I wonder..." He mutters on; it had been over a decade since he engaged anybody beyond the call of duty. All this time- he had spent on nothing other than Hadō research, but now he feared his spells were going stale. Without peers to compare them to- or at least to share them with- his Kido spells lost a great deal of meaning, for which he had come here today.

Re: A Whitewashed World [OPEN]

FILLER TEXT HERE
Artist: Carrotwine - Song: Dark Side Of The Road
A small girl made his way to the training grounds with a small sword tied to her side. If not knowing who this was you would think it was a small little girl in a yukata as she made her way to the training ground The hell butterflies scattered across soul society as people stopped training and began evacuating the training grounds as the boy's aura and reiatsu could be felt from quite some distance. A few unnamed shinigami approached while smiling, they all did not waver to the small girl as they all waved before leaving, it was a weird feeling that all these people were giving her attention she wasn't popular or anything but didn't want to be rude so she waved back with a smile.


Once then she has sensed a small spiritual presence within her vicinity and naturally followed it, once she arrived it appeared to be a man who looked like a traditional shinigami given his outfit but something was off...was it his appearance? Whatever the case it was natural to introduce herself to the newcomer.

"Hello, it's nice to meet you. My name is Momo Hinamori. What's your name?"

Permissions in this forum:
You cannot reply to topics in this forum
Who is online?
In total there are 8 users online :: 2 Registered, 0 Hidden and 6 Guests