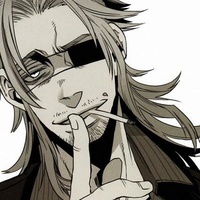 » Appearance Written: Nishiki is the definition of 'middle-aged', sporting a disheveled mustache and a dull mane of faded cream hair. He boasts a stocky frame hardened by scars and a pair of milky blue eyes. An eyepatch covers one eye, because it 'looks cool'. Nishiki walks with an irreverent, almost intoxicated, gate and usually is either set into a long, stony, frown or a wide, stupid, grin across his wrinkled leather flesh.

Typically, Nishiki wears traditional clothing whenever it is an option. A necklace of thick black pearls hangs around his neck, perfectly round and black as oil. The man stands six feet even with squared shoulders and hard gaze about him. 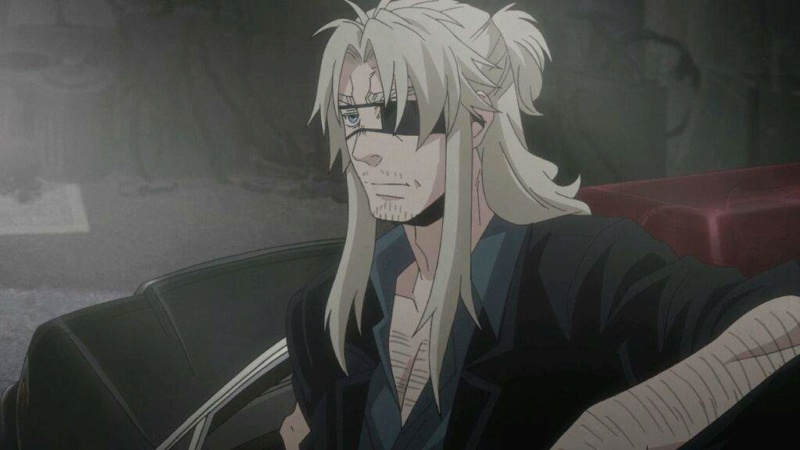 » Personality: Nishiki holds himself to an easygoing, sarcastic, and cool demeanor. When a grin creases his face he's the first to point out an easy joke or complain about the most trivial matters, but when it is exchanged for a frown Nishiki is a cold, honorable, man driven solely by his duty.

Either that or he's just bored.

Nishiki pretends not to care about many things, holding to an almost lackadaisical demeanor. He feigns to have abandoned his hopes, dreams, ambitions and cares but in reality Nishiki is a bleeding heart who, despite his typical complaints and denials, will go to great lengths to help others. Typically, though, he is unmotivated and lazy but makes a happy, troublesome, drunk quite in-touch with his inner child, which is often given a chance to spring loose thanks to the potent cocktails often filling his canteen.

Nishiki will often boast to others about how great a leader he'd make, but doesn't believe a word he says. Over the years this self doubt has been masked by a faux confidence and a raucous mouth. He is often the first to speak up if something bothers or disturbs him and is stubborn to a fault, holding true to his own ingrained sense of duty and honor. As such, Nishiki is naiive and trusting of those who have done him well in the past. He forms connections easily, finding it hard to break them.

Once one gets through Nishiki's shell they will find a dutiful, caring, man too trusting, boneheaded and romantic for his own good and also a sneering pessimist, tired of life and its many complications.

» History: Nishiki was born into a broken family in life and grew up split between a reluctant father and alcoholic mother. While he wasn't abused, Nishiki turned to the street for guidance while his parents quarreled and became a solid yakuza. Never much for killing those who didn't deserve it, Nishiki instead found himself scamming his way through the ranks way over his head. Two missing fingers spurred him into rejecting the yakuza lifestyle and attempting to retire to a countryside home and a peaceful garden along with his ill-gotten gains.

Awoken past midnight to the sound of shattered glass, Nishiki grabbed his pistol, a remnant from his past life, and burst from his bedroom door. Five men awaited him in the living room, wasting no time before shooting. Nishiki, riddled with bullets and dying, harnessed the final vestiges of his will to empty his magazine into one unfortunate thug before the world went dark. A dying man had been his last living sight.

As a wandering soul he felt nothing but regret. Not only for killing the one sent for him, but for his cheating lifestyle. Hurting people for his own gain wasn't in his nature, but the world had conquered him. Telephone scams and insurance fraud were one thing, blasting a guy full of holes another.

Cleansed as per-usual by a passing Shinigami, Nishiki took up life in the Rukongai almost enthusiastically. His true nature had been given an opportunity to shine through, and it wasn't long before he was tricking people out of their cash in almost childish ways and boasting and telling tall tales over a few drinks.

» Equipment: [If your Shinigami has any equipment? Put it here. If they don't, skip this section.]

» Racial Abilities: [You can put any customized racial skills/abilities/techniques in here. These can range from shunpo, kido, zanjutsu and anything else you want to add. Feel free to skip it if you don't want to fill it out.]

» Zanpakutô Spirit Appearance: [What does your characters Zanpukto Spirit look like in their inner world? Please write at least 1 paragraph for this.]

» Inner World: [What is your Zanpukto's inner world like?]

» Zanpakutô Appearance: [What does your Shinigami's Zanpakutô look like? A picture or written bio will do. You can also do both if you wish]

» Sealed Zanpakutô Power: [Over the years, Shinigami have evolved to the point where they now have special powers even when sealed. As such, does your character have special ability or power when not released? Try not to go overboard. If you do not have one, just erase this section]

» Shikai Release Phrase: [What is your shinigami's release phrase?]

» Shikai Release Action: [Does your Shinigami do any physical action to release their Shikai? Feel free to remove this.]

» Shikai Appearance: [What does your Shinigami look like when released?]

» Shikai Abilities: [What abilities does your Shinigami gain when releasing?]

» Bankai Release Phrase: [What is your shinigami's release phrase?]

» Bankai Release Action: [Does your Shinigami do any physical action to release their Bankai? Feel free to remove this.]

» Bankai Appearance: [What does your Shinigami look like when released in their bankai?]

» Bankai Abilities: [What abilities does your Shinigami attain in Bankai?]

(To Find Out about what these skills are for, please READ THIS THREAD before you try doing anything to it. After you have read it, do not fill your skills out until a staff member has graded your thread. The staff member checking your app will also give you Will Skills in which you can add to your app when approved. Click the spoiler below to see what tier gets what kind of skills.)

NOTE: There can be exceptions you can discuss with staff if the character's themes and masteries etc, are better suited to a different configuration. Let us know when after we approve your character if something along those lines is something you want for your character. e.g If your character isn't particularly quick but the force in their strikes are massive, so you could take a hit to their speed and drop it a level in exchange for raising your strength