Alastor | SEVENTH DIVISION MEMBER
Her words made him cringe. Just a little bit. Was it her attempt at calling him brothah? Bro would've not evoked the same 'hmmm' that this word did but at the same time this was Elyss saying what if she had a date. It almost made him break out into giggles with how silly she sounded saying it. Come on, no way.

He did sigh as he saw her storm off and throw the papers in the garbage. Well, he could at least say he gave them to Elyss. There was no rules that he needed to keep her on the ball with holding them onto them. He just shrugged and took a stretch. It was always a tense pain in the ass to follow along. Never did he know if she was going to answer with her words or her fists to a question.

They have got things to do. 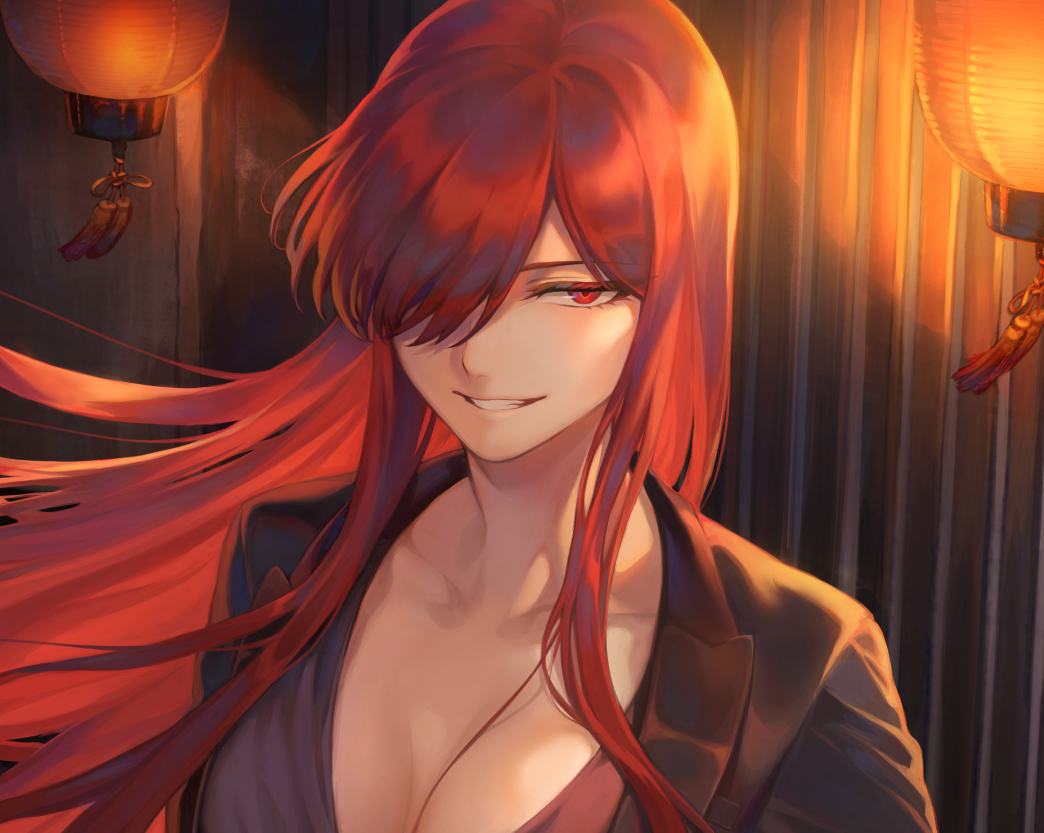 Wait, no. Come back. Damn. She missed the train again. Well, guess she’ll have to find another way to get to school now. She should have just picked an apartment that was on campus. Oh, wait! Ah, the flying taxi is here, and it’s her favorite driver too: a beheaded bunny costume spouting blood from its missing next. She’s quick to run to the taxi and open the door, the bodies of the horrid bunny’s victims piled in the back. However, before she got into the taxi, she felt someone pat her shoulder. Turning her head, she’d see Alastor, and then everything went black.

“Huh?” Her eyes would open, groggily blinking and looking around before she pushed off the wall. The back of her head is a bit sore from sleeping against a wall, but she doesn’t seem to care about that. Someone woke her up, and it’s the guy she’s supposed to be meeting. What’s his name again? Alastor? Oh, yeah. A quick shake of her head gets the cobwebs out so that her brain can actually function properly. A quick recollection of what’s supposed to be going on has her looking at the man impatiently. He had her waiting. Or did she get here too early? They didn’t really set up a time, did they. Ah, whatever.

“So, Alastor. Since you asked me out, I’m guessing you have someplace for us to go. Hopefully not some shitty bar.” A lips spread with a shit eating grin.

Alastor | SEVENTH DIVISION MEMBER
He shook his head, jeez. The gorilla was as thick as ever and he gave a sigh to show it. Maybe he ought to set the record straight.

"Hey, that ship sailed idiot. I'm not taking you on a date. I'm taking you to go actually learn to talk to people, and yes. It's going to be some shitty bar."

Alastor stretched before turning and not giving her the satisfaction of putting that shiteating grin on him, hopefully he turned the tables on her a little bit. Now it was up to her to follow him and honestly he had no idea where he was going, the first place that looked decent really. Why plan it out too heavily? It wasn't like he was taking Murasaki out somewhere, that would make him think a little bit before asking her.

She is pushing his buttons a bit, but if she's a cunt, why not embrace it? He gave her the title, after all. Though, she didn't add anything else to her little quip as her steps fell in line behind Alastor. So, their destination is someplace shabby, huh? If Elyss were to speak her mind, she'd just call him out on the fact that he probably doesn't even know where to go. But, its the spirit of it all that matters. Surely, once they're in a suitable bar, their evening'll get better. All Alastor needs is a drink.

However, she is curious. He did pull her from her evening for no real reason besides what he thinks is best for her. People complain. That's just how life is. Someone's going to complain whether she's a saint or a demon. In what way is Alastor supposed to remedy whatever everyone says is wrong with her? Is one night really going to open her eyes? Thoughts and more thoughts, but one thing is certain: this is going to be entertaining.

He retorted. He didn't really have anything witty to hit at her, if only because he wondered if she'd figure out the insult he thought out. He didn't want to hurt her head with trying to figure out insults after all. As he wandered around the streets of the evening and found a place finally. It was pretty small, cozy with the dim lights. Yeah, if he took her to someplace more large and populated he figured a fight would be more likely to blow out and he'd be explaining to Murasaki the incident.

"Alright, sit down and order a drink you idiot."

The moment he said it the bartender gave him a dirty look, a man talking shit to such a fine looking lady? He probably thought Alastor was an idiot. He didn't get what a headache this woman was when you got to know her.

Gremlin? Well, lookie here. Alastor’s a funny man. Elyss wanted to laugh at his little insult. Short jokes, huh? If she wants, she could probably take out his knees and have him hobbled over like a gremlin he so taunts her with. However, she’s not mad at all about it. Not everyone throws insults her way in response to her brash mouth. She went with him expecting this after all. Hopefully, this night is going to be full of nasty comments as the drinks start overflowing.

“Oh? It’s small, but the atmosphere is alright.” Her hand under her chin as she checked the place out. Yep. He sure did take her someplace lacking in grandeur. She doesn’t like overcrowded areas anyway. Big places just raises the likelihood of running into troublemakers, as if she’d ever agree that she’s a troublemaker. And, Alastor in his grumpiness dared to be rude to her in front of others. Tsk. Tsk. She didn’t respond to him, but she did throw a distant look over at the bartender, obvious disdain in her eyes for that very moment before looking back at her redheaded associate with a wry smile.

“Ya know… You can order for me. You did invite me to get to know me or to get me to know others or whatever this is. So, pick me something you think matches my personality. I believe in you, Alastor.” A bit of a mocking tone, but she does seem strangely interested to know his choice.

Alastor | SEVENTH DIVISION MEMBER
"Can we just get some water for the lady, please? Just tap water will do, she's not fancy."

He smirked while staring at the venue. He didn't really give it much thought, looked alright though. Alastor's eyes were checking out what people were around. A couple of guys, a couple of gals. Enough that he could probably dump Elyss on one of them. He sipped at his own drink, giving him a couple of moments to think about what he was going to do.

It probably depended on how she reacted to the drink.

Oh? Well, that little prank of his rewards him with her hand clapping him against his back, pressure behind her palm; just enough to really get her point across. However, despite her obvious warning, a small smile is still on her face as she took her glass of water and sipped it until the cup emptied down her throat. Then, she’d slam the glass down and throw a look at the bartender, and her eyes froze the man on the spot. Venom leaking from her visage, a viper coiling itself around the poor man as she spared him no mercy.

“Give us your strongest, the whole bottle too.”

Her smile widened, but it’s creepy, almost diabolical in nature. Her eyes moving back to Alastor, her expression had softened, but there’s an obvious edge about her now. She's not a kid. She had expected him to pull something, but that was a bit too disrespectful for an outing. She'll have to put him in his place, yeah?

“Oi. Let’s have a little contest, Alastor. Water is nice, but it just doesn’t warm ya up like a good ole glass of alcohol.”

Wow that hurt, he coughed a little but glared back at her. He'd get her back somehow, if not physically because of the difference in their power but somehow. Did she really want to go on a drinking contest though?

The redhead gave her an inquiring eye. Didn't she know the whole difference between their weights and everything? Was this little gremlin going to cheat with some special spiritual nonsense? Maybe he could cheat, he was sure he could use his inherent fire abilities to burn away some of the alcohol out of his system. You know, just in case he needed to.

“Hah. Ya get whatever ya want, lanky shrimp.”

She doesn’t care for making actual bets. She just wants to put Alastor in his place. Water? Really? She’s still peeved, but him accepting is enough to brighten her mood, for the wrong reasons of course. Soon, two bottles are put before them. What’s this? Some kind of rum… It says it’s about 40% alcohol by volume. Well then… That’s double the amount they have in sake. This is going to be fun. Elyss doesn’t waste time pouring them both their first glass.


She taunts before downing her drink, and, damn, the back of her throat is inflamed by the raw intensity of the alcohol flowing down it. Well, if she was a man, that would have put hair on her chest. However, she just sighs loudly, her breath hot and wretch by the rum. She might have made a mistake here, but she’s not going to let this redheaded punk get the best of her. She doesn’t need any cheap tricks to win this.