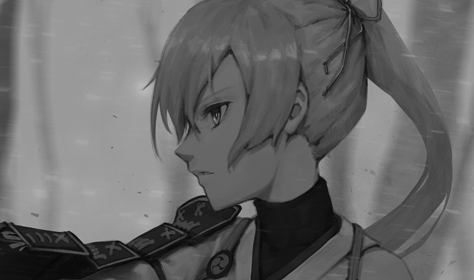 MAKOTO ARIMA
"Kasha... Hmm, the name seems familiar. Though I don't exactly recall a boy. Either way, he does not seem to leave much of an impression if that is the case."

Makoto's thoughtful expression shifted back, returning that precious attention back to Shishiyuki rather than shuffling through distant memories that were untouched since she left months ago. Then the topic seemed to shift back to Shishiyuki and Makoto naturally saw it as an opportunity to shift the focus of herself - and it was only proper for her to consider Shishiyuki in the same way that this woman was not willing to ignore her troubles.

"Oh, like what? You can tell me anything you know. I won't tell a soul."

It was genuine though embarrassing to say.

KOIZUMI SHISHIYUKI
The way Makoto worded that did pierce through much of Shishiyuki's typical avoidance of the topic, and she studied her teacup as she thought about how best to answer that question. It was not long, but it was still more hesitation than she ever usually displayed.

It was true, she trusted Makoto far more than she trusted anyone else. But this was a more complicated matter than simple trust, wasn't it? It was vulnerability, and it risked putting not only herself into emotional distress, but Makoto, as well. But, even so, she did not wish to hide these things.

"I have thought about you and I, our time spent together. I do not intend to step around the issue with evasive words or turns of phrase. I think that I have found myself with some degree of romantic affection for you. It is something that I have little grasp of, but the thought remains quite sure."

Direct, to the point. She'd not intended to broach this topic, but she supposed it was better than not doing so, especially when the alternative was to lie.

Naturally she expected that she should somehow find herself a mess, a stuttering and nervous mess at the topic being brought up but she was prepared for this. Well, it was an inadvertant thing due to Abalia's challenging her on the topic and making her have to confront the possibility and consider its validity.

She just didn't expect this to be now. At least she kept her composure but her expression did appear a little blank. It was a lot to take in for her, maybe her long pause and distant look was exactly the poor reaction she would've done otherwise. Regardless, she wasn't going to sit here dumb all day.

So what? So do you want to try it? No? Yes? There was such a myriad responses, their consequences and also the indecision on her part. Makoto did think of trying to do what Abalia did when she said that she loved her, though that was a much different context - that response here would likely only add more confusion.

"I'm sorry, I don't really know what to say. This is all so confusing for me and I've not been with someone in such a long time."

KOIZUMI SHISHIYUKI
"Yes, I completely understand. Please do not feel as though you need to give me any sort of answer. I understand this is a great deal to simply tell you, but I would never wish to break the trust that you and I have built."

Of course, even in saying that, Shishiyuki was still indirectly hiding her own feelings on the matter. She did, in fact, wish for more of an answer than that, even if she knew that it was a wholly selfish desire. But she would not dare to ask it of her, given the situation Makoto was in.

"Please know that, regardless of how you feel on the matter, I would not allow this to lessen what we already share. You are someone that I can trust, someone who has helped me a great deal."

MAKOTO ARIMA
Well, this felt anticlimatic. Makoto sat quiet while listening to the response from, honestly not satisfied by failing to give her an answer. It just felt like a letdown to take her earnest confession and be unable to respond. Briefly she wondered to herself if it was because she was afraid of being vulnerable and opening herself up to romance again over actual fear of losing control of trivial things like her idea of what was normal.

"Well, I don't mean to be hasty. I think I owe it to at least consider it. I just don't know anything definitive without any real experience, this is all so new and all."

What exactly did she mean by that? Makoto could not say in that moment, nor could she really figure out how Shishiyuki wanted to trial this. Did she mean physically intimate or just emotionally? Though that latter one felt like it was already shared between them. Was she meant to kiss Shishiyuki now or cuddle? Just continue talking?

Makoto took a pause to await the woman's response to build a plan.

KOIZUMI SHISHIYUKI
"I lack any experience in this myself, so I believe I know how you feel in that respect, at least."

It wasn't in Shishiyuki's nature to be pushy about much of anything, of course, and she wouldn't be in this either. Of course there was some degree of desire for more than this sort of almost idle conversation, but ultimately, it was still perfectly pleasant, something that she could enjoy in its own right.

"I suppose the question becomes whether you believe that I can help you discern anything more conclusive. Please do not take that as me trying to force myself into this decision. But naturally, I do not wish to simply push you into some state of emotional confusion and provide no assistance."

Even she had no real plan for what she ought to do now, especially given how vague Makoto's response had been. But, in that respect, that was the first thing Shishiyuki thought she perhaps ought to do. Simply push Makoto gently toward a more conclusive answer, whatever it might be.

MAKOTO ARIMA
Her mind vaguely flashed to the memory of saying that she didn't want Shishiyuki to throw away her first kiss on something trivial like that, did this count? She didn't know whether or not that was not wanting the first kiss to be with herself or if it was for the sake of using on something that meant something. This was a lot different than last time, right?

"I think I'd only be more confused if I didn't try."

Steeling herself and trying to distract her mind from the thumping in her chest from her beating heart. It was just so hard to think properly when she felt faint from the anticipation and ambiguity of what to expect. She expected something but she had no idea, it felt like she was opening herself up to criticism. Her attempt to kiss Shishiyuki would be remembered as her first and she didn't want to underperform or be disappointing.

That would just be humiliating, it was already hard to stop her cheeks from being bright red while her lips advanced on Shishiyuki's. 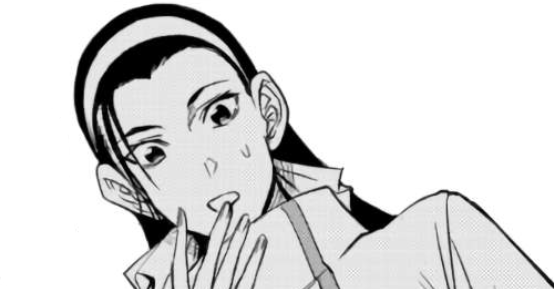 KOIZUMI SHISHIYUKI
That much was true, and Shishiyuki would have said as much were it not for her realization of what was occurring. But she knew that this required a good deal of confidence from Makoto, and frankly, she found it faintly more daunting than she would have actually anticipated.

Her touch moved down from Makoto's shoulder to her hand, taking it gently in a way that was quite exceptionally far from the usual rough touches that Shishiyuki gave in the context of training. This was, after all, something more intimate, and even if she did not know much at all of these sorts of moments, she did her best to make it something worthwhile as her lips touched Makoto's.

It was...pleasant. Shishiyuki knew immediately that her musings on this were correct, that she had indeed felt genuine affection for Makoto, and the moment in itself was enough to make all other things in the room seem inconsequential. The scent of burning incense, her own almond-scented perfume, everything that one might typically notice simply gone by the wayside. 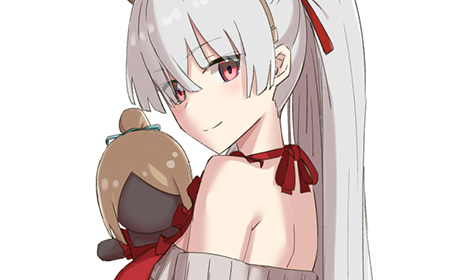 MAKOTO ARIMA
Despite her initial concerns Makoto did feel content with her performance, it was good for instilling confidence and provided some succor in this stressful situation. Though the tension felt like it dissipated when her lips finally sealed the deal and the leadup came to bloom in their kiss. The thing that remained on her mind though was time, how long to remain kissing her. Not long right? it was her first one and Makoto didn't want to pressure a long drawn out situation which might not appeal to her. That was honestly the main reason, she wanted to see Shishiyuki's position on it.

She asked trying to remain stoic but failing while she felt like her senses were trying to take in as much as possible; the sight of her, the scent that she had, the sound of her breathing. Her cheeks were rosy while she stayed in close, not moving away from the woman but also avoiding being so close that she was suffocating her personal space.

KOIZUMI SHISHIYUKI
For such a simple question, Shishiyuki had to admit that she did not have an immediate answer to it. How had it been? She could have answered in any number of ways, and her instinct was to try and produce some answer that was befitting of her actual response to it. But anything that came to mind fell flat, and so instead, she simply spoke calmly, though with what could only ever be called the faintest degree of shy hesitation.

No other word quite adequately summarized her feelings on the matter, and while she was certainly tactful enough not to simply kiss Makoto again, it did not change that her perspective in this moment had been notably changed. Subtleties in the woman before her that she would not have considered now suddenly seemed quite glaringly obvious, little things like the shape of her eyes or the curve of her lips--was this normal? Surely it was.