Familiar footsteps traced the well worn path, the barefoot man staring silently at the wall before him. The itch underneath his skin, the sound of something vicious pounding at the back of his skull, it kept his thoughts occupied. The memory of what this was lingered - the seireitei.

The way to the Gotei.

But it was distant, grasping at the shadow of straws. His brow tightened, a faint sigh blowing from deep in his chest. "This feels like where I should be..." followed behind it, held tightly under the breath. A look around didn't give much either way, with anyone who met him in eye contact quickly averting their gaze. He didn't blame them.

Kabuto's gaze would center itself as he continued forward, only to be abruptly cut off as a man found himself not even an inch in front of him. Unable to stop himself, Kabuto plowed over the shorter man, tumbling over himself in a dazed shock. A tumble of vowels and consonants churned between the two of them, hurried excuses and apologies split with curses and obscenities. It would last for a moment, before ending in a moment of silence as they stood tall.

"What do you think you're doing!" the man shouted, a finger lodged in Kabuto's face and hand tight around his hilt.

The man appeared in some kind of uniform, recognizable as a childhood friend. The name escapes you, but the familiarity is comforting. "I..." Kabuto's hands raised, the surprise bright across his face. "...Don't really know what you're talking about."

A grimace quickly followed as the man withdrew his finger, gesturing rapidly towards the air around the tall, ashen man. "THIS! You're throwing this disgusting reiatsu out everywhere!" A plain look of disgust had crossed across his face, distorting a pencil moustache into a pair of needles.

Oh, that would be... His head shook, sharp breath shooting from between gritted teeth. "Sorry, I've kind of gotten used to it." It was easy to tell that wouldn't be enough of an explanation.

"Okay, look -" Kabuto stepped forward, interrupting the guard. "I'm in the 12th division, my name is Kabuto Itagaki. I've.... At least, I think I've been missing for a while."

His words were met with silence and a stare, both equally pregnant with suspicion. The guard would break the silence.

"You must've." He let go of the hilt, bracing both arms to his hips. "There isn't a 12th division any more." Looking Kabuto up and down, the man shook his head, muttering something underneath his breath as he looked out and beyond the monolith of man.

His eyes would light up, raising an arm to wave and shout. "HEY! Aren't you in the fourth division?! Come over here!" A smile slipped onto his face, pointing a thumb towards Kabuto. "I think that's where they transferred the 12th to." came underneath his voice, with a wink and a pat on his chest.

Re: At the Gates [Laskt] 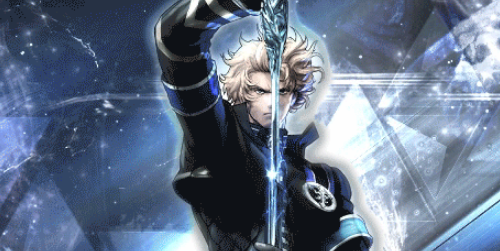 ""Good work men. It is....good to see you all have kept up with your training regimen. I zink ze Vanguard can be rebuilt despite our losses. I will zee you all here tommorow."

With a chorus of "thank you's" and a barrage of salutes, the newly reborn Vanguard Unit dispersed, some returning to the barracks of the 4th Division, while others made for restaurants or bars, talking and joking about the severity of the day's training session. Laskt watched them go, feeling a strange mixture of both pride and pain. The men and women of the Vanguard Unit were good, loyal fighters, and had gladly followed him into the jaws of death many a time to help avert disaster after disaster. A few were no longer here, lost to transfers or killed in the line of duty, but those that remained were among the few Laskt would truly call friends. On better days, he would have accepted their invitations to celebrate their Unit's rebirth, but not today. Today, his mood definitely tended towards melancholy, and he soon found his feet taking him towards his favorite spot on the wall of the Seretei.

It had been something he had been thinking about for a while. Ever since he had chosen to take responsibility for himself and his hitchhiker in the form of Tozat, he had found himself lost, without real purpose. Sure, keeping the Hollow at bay was not exactly an idle task, the corrupting influence of the beast within was something he constantly had to fight hard to keep contained, but Laskt had begun to find himself wishing for something more. The Shinigami had served the Gotei loyally for almost a millennium, and had never thought once about abandoning it. The Seretei was his home, and always would be, but was the life of a warrior truly all that he had to fight for? Combat for the sake of leading and training others to do the same?

The knight's brooding was abrubtly cut off as a surge of energy washed over him, as familar as the pulse of his own heart. The curious mix of Shinigami and Hollow was undeniably that of a Vizard, and a relatively new one if Laskt was any judge. Even before the gatekeeper finished talking, Laskt had already flash-stepped down to the ground, eying the newcomer with a wary eye.

"I am Laskt Matiche, Third Seat of Ze Combat Divison. Ze 12th Division was reorganized a while ago into ze Third Division. I can take you zere if zat is what you desire?"

Although his tone was friendly, it was undeniable that Laskt was on high alert. His hand hung innocently at his side, although his fingers lightly drummed on the sheath held at his waist.....

HONORBOUND, EVEN IN DEATH

Re: At the Gates [Laskt]

The man's disappearance left him in something of a fluster, hands grasping at invisible straws by his side before pausing, a deep breath as a hand tightened against his forehead.

"I-" Kabuto's fingers pressed tight against his temple, a dozen questions racing a second. The hows, the whys, the whens, and more importantly, the whos. Yet even as he did, the iron mask laughed, echoing quietly ever more.

Then a bright memory, indecipherable. A voice, the sound of chanting, celebration. A decision to hold his tongue, for now - pursed lips betraying his decision for a moment, however brief.

"Yeah, I'd appreciate that." Kabuto's voice tinged in confusion, the man's brow relaxed, his hand extending to offer a handshake. "My name is Kabuto Itagaki."

His gaze slipped to Laskt's fingers for a moment, the edge of his mouth creasing into a frown. Follow the lead, no need to make him antsier.

"I've been told I was a fourth seat, but from what I can tell I was at least third." The words poured openly, pausing for a moment before he'd elaborate. "I've... Been away a while."

Not that he'd elaborate much.

A familiar face to the recesses of his mind, the man known as Laskt did not strike him particularly memorable, although that was the case for most amnesiacs. His concerns were still in the thought presented - a grand change in order.

The frustration of the unknown.