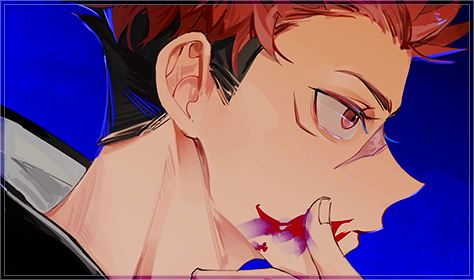 Saisei shrugged at the aftermath. He wasn't exactly fond of smacking folks around. If you were to give him a choice, laying his hands on a random group of men wasn't his style. The Vanetti had rules, they had turf, they had problems that needed solutions. In some cases, violence isn't meant to hurt someone, it was meant to send a message. Saisei very clearly sent that message to these Frangipani men.

Imelda's light smack to his back left him without any real pain, just the remark of the slap alone really. She was a bit more handsy than he expected her to be, that was fine. As the boss he didn't exactly get to complain. Turning back towards Isabella, he leaned over towards Lorenzo and averted his eyes from the quiet Vanetti sister.

"Don't mention it, Lorenzo. I'll make sure to come by later tonight to help out with a few repairs. Glass ain't the easiest stuff to work with, me and Donato will get it taken care of, just make sure to have the glass cleaned up by time I can come along."

Moving away from the counter, ignoring the men who rushed off, Saisei pushed at the tip of his nose. Looking down at both Imelda and Isabella, he scoffed to himself before complaining a bit louder than he normally would.

"What the hell was that about? Not just that but I'm not askin' for much here. Lorenzo and his kid are good men, if they had problems with us I think they'd be a bit more up front about it. Cut them a bit of slack, Mel. And you-" he pointed at Isabella. "Either I'm an idiot or you gotta have had some idea of what was goin' on. That or you just wanted to see a message of a situation. Which, I mean fair yeah. But you could have helped out..."

He turned away, almost pouting like a child in response to everything. Saisei felt like a bit of a prude when it came to the type of work the Vanetti were so inclined to take part in. His hands were a bit more dirty than he was used to, it was something he hoped wouldn't stay a common fact moving forward.

"Frangipani. I've only her y'all talk about it in passing. Who even are they?"

isabella
Isabella poked her head back in to see that the coast was clear. Acquainted as she was with the violence of the Cosa Nostra, she wasn't the best when it came to handling it directly. That was a job better suited to others. What did suit her was the follow up and assertion of Vanetti authority. She walked passed Saisei without even looking at him, waving her hand to dismiss him--or maybe fan away his breath. Still, their questions weren't unfounded..

"Well, I don't know for suuuuure, it was just a rumour on the streets that the Frangipani were looking to get busy. We all knew that the Vanetti weren't the only ones looking to fill an open space, so it's no surprise--it is quite shocking that they'd make a move on our territory, though."

She continued walking until she arrived just a foot away from the seated and sweating Lorenzo. She bent forward at her waist to have her face just inches from the man.

"What's even more shocking, however, is that I could hear rumours of the Frangipani culos making moves on our turf, but not hear it directly from the parties afflicted. Strange, isn't that, Lorenzo?"

If he was sweating before, Lorenzo was practically drowning now.

Isabella took a rock out of her pocket and threw it at another glass shelf, shattering the display.

Donato dropped what he was doing and took long strides towards Isabella with rage on his face.

"Hold the boy back."

Her face returned to inches away from Lorenzo, who shut his eyes close from her sudden movements. She directed one of her hands towards Saisei, and gave Donato no further attention. Isabella simply assumed Saisei would obey.

"Listen here, Enzo. Listen close. If we were more poorly prepared, there might've been two dead Vanettis here. In your shop. Our blood."

Isabella leaned further forward, her lips close to Lorenzo's ear, and spoke in a hush tone.

"Could you imagine seeing your own family's blood spilt in front of you? I could not. And I never hope to."

She stood back up straight and gave him a hollow, condescending stare.

"When Saisei comes back later tonight, you'll have the rest of the money. Capisci?"

Word Count: 331
Imelda was, quite frankly, taken aback by the actions of her sister. Yeah, Imelda knew not to mess with her but this was a side that she has yet to see in action. It almost scared her, the ruthlessness.

"Bella." Imelda spoke under her breath, dreading the conversation she was about to have. Imelda got it; the family had to be tough lest people started to take advantage of them, but deep down in her person she saw this as taking it a bit too far. Yeah, they fucked up, but they were just regular people trying to make it by, what else were they going to do? It was unfortunate that they even got caught up in the crosshairs of this messy situation.

"Bella!" Her tone rose to a yell, trying to speak over the alarms. "They can't fucking do that! You just can't fucking do that!" Emotions started to bleed into her words, the adrenaline from before quickly leaving. "They're our people, Bella! We were supposed to protect them and we fucking failed! Its not his fault, and he can't get the money if he tried anyways. They sell jewelry, I imagine it doesn't just go everyday. And this-" Imelda gestured around them, to the shattered glass and blaring alarms. "This won't exactly be good for business." Over the course of that speech she started to mellow out again, ideas started to bounce off the walls of her skull.

"But we just can't let the money go. Debts have to be paid." Quickly, a finger was pointed at the son. "You. You work for me- I mean us now. You do what we say, when we say, how we say it, and you'll make this money back. Until you pay back how much your father owes, you shut the fuck up and you listen."

Imelda paused for a moment and let the silence hang before looking around the room at everyone present. "Anybody got a fucking problem with that?"
Coding done by S_E

Saisei Satō | A Dream Realized
Frankly, Saisei was left with very little choice in the matters of the Vanetti. Mr. Lapdog had a single job, as per usual, that left him with only one thing to do. Looking to both Imelda and Isabella and back to the two men, Saisei sighed and shook his head. This was quite the mess he had found himself in.

"Calm down, Donato. Nothin' we can do about it."

Without much thought, he yanked the man by his collar and held him back with relative ease. It was quite the mess for sure, all that mattered now was that Donato didn't find himself six feet deep in a grave somewhere. If it weren't for Saisei, that would have come a lot faster for the young man.

Patiently, he waited for the two sisters to get done with their little feud of sorts. It wasn't his place to speak up anymore, if Isabella or Imelda wanted his two cents they'd ask for it. Besides, keeping quiet would make it a lot easier for Donato and Lorenzo in the long run. He knew that.

"I'll be back by sundown, long as the sisters find that to be appropriate. I'll be glad to help with the mess we've caused of the place. Promise."

Saisei yanked Donato closer and smiled, patting his cheek with his other hand. Not as a show of force or aggression, no. Call it cliché, a show was a show. Saisei simply wanted to be sure that they wouldn't find themselves ran ragged by the Vanetti. They were good at that.

"That fine by the two of you?"

He didn't care what they said or what information they'd give him on the idiots that thought it was a good idea to skulk around on their territory. He asked but, soon, realized it didn't matter. Play the role you were given, do as you were told. No reason to make things worse.