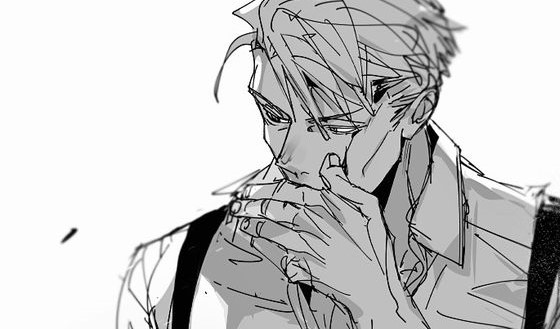 W. A. R. CURRY | WRFS PRESIDENT
There was relative silence as a trio of Hollows seemed to be gathered at one side of the warehouse. What exactly they were doing would soon be lost to time, though, as the room suddenly erupted into chaos. None of them saw it, or anything beyond a blur of bladed limbs and gore, as Sabertooth burst through them in a calculated burst.

The intended target was caught entirely unawares, bisected cleanly, as the top half of the body flew across the room and smashed against the far wall with a sickening impact. Their two companions were stunned for a moment, and then the whole warehouse burst into life.

There were ten distinct presences, as best Saber could tell from her motion sense. Three more were barrelling towards them down a hallway to the north, whilst the other five were out on the main floor but now clearly on high alert. But the two left with her did not simply lay down and wait to die, no. Instead, they spread out and began to stalk through the shadows too. They had not seen exactly where she had gone, nor did they have any way of tracking her easily, instead they simply swung wildly into the dark to see if they would find any purchase.

Simple. She was getting better. Watching the upper half of the hollow flung across the warehouse was certainly satisfying. They were weak. But numerous. That was good. Culling these would be a good step toward making sure that the cargo wasn't overrun. Sure, she could murder them quickly, but if they all rushed the cargo she was protecting, especially while dealing with some other threat, that might have been an issue.

But there was another reason that she'd chosen this particular group to ....cull ahead of time.

She'd learned much in her scuffle with that human. Killing that one troublesome hollow, she had had to admit that the man's....fancy little move, however simple and ...well... uninspiring. Had given her plenty to consider. She was weak. She'd grown in strength since devouring so many hollows and her own ....practice manipulating humans into suicide so that she could eat them. But the abilities inherent to her kind weren't quite what she was looking for. A cero was too.... noisy. But these little martial arts that Kenichi had employed? Perhaps these could be useful to her. And so as those creatures began to wildly fling about and search for her. She promptly closed in, and even before she arrived. Her spiritual pressure BELLOWED out, a brief roar before her arrival, to get the hollow's attention. She didn't want to sneak up this time. She wanted it's full attention. The water she'd collected along her frame suddenly SURGED, abandoning her body and dropping her camouflage as she SLASHED, a horizontal sweep of that bladelike wing at high speed before the water surged forward. Keeping her own general shape as no less than five wings made from water suddenly flashed forward, unleashing a series of slashes outward and forward.

She wasn't a martial artist. There was no way she could directly emulate the sudden flurry of blows Kenichi had unleashed in their fight. But she was VERY apt with her powers. And so rather than her body, a sudden barrage of manipulated water followed her own deadly slash, condensed into thin wing-like blades which followed up on dicing the hollow she'd run into, intent on ripping it into chunks and then launching it's diced body at it's nearest ally in the flurry of cutting water.

W. A. R. CURRY | WRFS PRESIDENT
The strike of Sabertooth was not quite deadly, but the five watery slashes that followed were able to finish the job as the Hollow was chopped up into a few choice chunks and tossed in the direction of their comrade. But perhaps comrade was too strong of a word, as the other creature barrelled on unperturbed by the disembodied pieces of Hollow being tossed at it. These creatures were small, yes, but that did not mean they were helpless as it finally rounded on the Sabertooth with a sudden burst of speed now that the camouflage had dropped.

With arms like clubs, it swung in a windmill pattern looking to quite literally hammer Saber into the ground. Not to say that an individual blow was staggeringly strong but if she simply sat there and tried to take it then it would probably be problematic. There wasn't a particular elegance to the attack, it was a beast simply trying to beat its opponent to death as best it could.

That was not the only challenge facing Sabertooth though, for there was a trio of Hollows that were nearly on top of her as well. In a matter of moments, they would be bursting into the room, ready to wreak havoc. So what was her next move going to be?

Satisfaction. She watched as the hollow was promptly cut to pieces, but those pieces were promptly ignored. Her eyes widening slightly as another was suddenly rushing towards her, not only that but more hollows were closing in. She narrowed her eyes and shifted her attention toward the incoming thrasher. The water around her suddenly condensed, swirling around her body before forming little needles and fired them in a sharp spray toward the rushing beast. Aiming primarily for it's eyes as she ducked down. Her insides liquifying, sljimming herself down as she flattened against the floor and rushed between the hollow's legs, narrowing her profile while it was, hopefully, blinded by the water needles, before LASHING upward with her tail once it had passed her. Intent on cleaving all the way up it's spine, a thin sliver of water lashing out to extend the cut, hopefully cleaving the hollow ionto two clean pieces as thespray of water that had been the needles flowed back to her frame.

As the new trio of hollows arrived she fought the urge to just camouflage again. NO. She needed to face them head on. If she couldn't fight these small fry directly then she'd have no chance of fighting anything stronger. She bared her teeth and SNARLED menacingly at the incoming hollows, a low roar bellowing out as she flared out her wings, making herself look bigger as she waited for the new arrivals to make their move. And get within range of her water's reach.