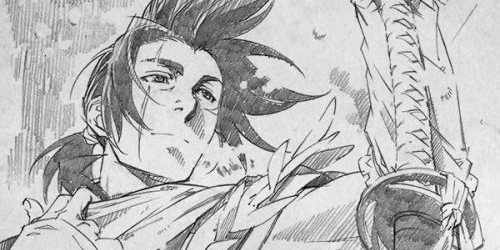 KAITO TOMOYUKI | GHOST OF THE RUKONGAI
While Kaito was relatively young compared to some figures within the Seireitei, the years he did have were hardly wasted. The moment that he felt his attack whiff, he readjusted his footing, leaning back and bringing his sword close to his chest, letting the pommel slide across it.

As it slammed against the handguard, he quickly pushed it to the side and took a few steps back, one of his legs narrowly avoiding the trip -- the same could not be said for the other.

Thrown off balance by the remaining leg being swept under, he promptly fell on his ass, leaning his head back to keep the sword point as far away as possible. As she started to speak, Kaito didn't waste time in letting her finish. With a swift jolt of his arm, he pulled the sheath of his Asauchi from the weapon, tossing it with force at Kimitsuki, all the while suddenly lashing out and swiping at her ankle with the wooden weapon, grabbing his Asauchi by the blade at the same time.

He didn't want to hurt her. In a spur of the moment choice, he lunged forward, his thumb and index pressed against the tsuba of his sword, violently thrusting it into her stomach. He winced, feeling the sharp sting of pain and the warm flow of his own blood down the end of the blade as he scrambled backward, keeping both weapons firmly gripped in his hands as he kept himself ready.

KIMITSUKI YAMAMOTO
Well well... this one was not adverse to fighting dirty, nor do listening to someone when they spoke; even if a sword was at their throat. Admirable, if not incredibly reckless. Someone merciless likely could've cut Kaito's throat with just a flick of their blade. However, as this was more of a spar, such a thing was quite impossible. So, instead, Kimitsuki had to use her blade to smack the sheath away, likely leaving a bit of a dent in the sheath because of how swiftly and strongly she had reacted. However, it was quite the good distraction, leaving Kimitsuki to have to jump the approaching wooden practice sword to avoid being smacked in the ankle by the hard wood bokken; which left her open for Kaito's next strike.

Fast as her reflexes were, Kimitsuki was quite available to tricks and dirty attacks like any other person. The only thing she really had time to do was to catch the pommel of the Zanpakuto in her hand; aiming to protect her gut in the process. Lessening the blow with her hand, and preventing the air being pushed out of her diaphragm forcefully by such a strong strike to the stomach left her able to react properly; even if the momentum of the attack did send her back a tiny bit. Much like Kaito had injured his own hand, Kimitsuki's hand too had been injured; lightly cut and bleeding somewhat on the palm. She inspected her hand casually, testing the grip of her left hand with minor interest before she, quite literally, seared the injury shut with a sudden gout of fire breathed from her mouth onto her hand; leaving a burn that was soon liberated from her by the same flame coming from her mouth. Afterwards, Kimitsuki looked towards Kaito.

"Forgive me for underestimating you, Kaito... Capable, underhanded, and confident... You'll become quite the Shinigami, maybe fit for the Stealth Division with those skills..."

Kimitsuki just gave him a warm smile before she flourished her blade and her hair seemed to glow a bit more orange, sparks bursting into color about her blade; which she left hanging at her side. All of a sudden, heatless fire burst around the entire room. It was simple, frankly. If Kaito was going to fight on his terms, Kimitsuki was going to do the same; but without all the damning heat for Kaito's sake. Afterwards, the Danava rushed at Kaito with speed she had not shown him previously, distracting him with a fireball of flame that burst at his feet; with Kimitsuki using the surrounding flame as cover to hide her movements from Kaito. In those precious few moments, Kimitsuki used that distraction, and her own fire around the room, to surprise Kaito from his injured side; the hand that held his Zanpakuto by the blade. From their, she feinted with her sword and instead punched Kaito in the side, or shoulder, after making him go for the feint. Afterwards, Kimitsuki stepped back into the fire, retreating from sight briefly.

"What will you do... if you cannot see your opponents? I wish to see what a prospective Shinigami can do..."

KAITO TOMOYUKI | GHOST OF THE RUKONGAI
While he may not have been a prodigy in any of the Shinigami arts and had no proper talents to speak of, he knew that he had the resolve to do whatever it might take. While the tricks he used were relatively new ideas to his repertoire, this spar proved that they were effective. He didn't respond to Kimitsuki's comment, though he did feel a tinge of pride well up in him.

Nevertheless, he kept his guard up, taking a brief moment to turn his Asauchi, holding it properly. His hand felt hotter, not noticing the warm, slow drip of scarlet slid from between the handle and his hand. As the flames surged and danced around the training ground, Kaito kept his eyes on Kimitsuki, only breaking the line of sight as she threw a fireball at his feet. Taking a sudden leap backward, he lost her. She had slipped into the fire. He couldn't see her shadow clearly through the light and the roar of the flames made it hard to hear.

He didn't bother waiting for either to become apparent. He immediately moved toward the sheath of his Asauchi, picking it up and sliding the weapon back in. Keeping it in one hand, he kept a conscious finger over the tsuba to keep it from slipping out. Out of the corner of his vision, he saw movement, and as he turned to meet it, raising his Asauchi, blocking the sword, only to suddenly be punched in the side.

He stumbled back a few inches, holding his side with his other arm. He didn't have anything that could detect her through the fire. He had to try and clear it. He wasn't well-versed in KIdo yet, but he had been studying as best he could. The only one he could think of that would help was the first Hadō, Sho. Raising a hand and pointing at a random point of the ring of fire, he quietly recited the name of the spell.

There was a small, brief gathering of energy at his fingertip...only for a sudden blast of concussive force to send him flying backward and to the ground, scattering outward and dissipating some of the flames. The wind thoroughly knocked out of him, Kaito tried to make it to his feet, keeping himself away of wherever Kimitsuki may be. He doubted that she would be affected by something like that, but, it was at least something.

KIMITSUKI YAMAMOTO
Despite everything, despite the fire and the flames, Kaito still had impressive reflexes and reactions. Kimitsuki couldn't help but be impressed as she walked through her fire; the crackling of flame completely masking her footsteps as she moved around the arena. It seemed that, in desperation, he had used kido; and it backfired. However, the result of the backfire was quite useful, in the end. It removed a section of fire that Kimitsuki had recently walked through. She raised her eyebrows at this, deciding to leave the section Kaito blasted away free of fire; to signify his efforts at the least. Indeed, they may be leagues apart... but Kimitsuki didn't want to crush the student. She was appraising, attempting to teach... and she definitely was wanting to show Kaito their difference at least a little bit.

"Wonderfully done, Kaito~ Excellent use of what you have and can do... But do not be reckless, relax, and listen. Ignore the sound of the fire, focus~ Listen hard..."

Kimtisuki continued to walk for a few moments more, waiting to see what Kaito would be able to do, what he could do if he was allowed to take a moment, relax, and focus his senses to try and find her instead of depending on his sense of sight. And so, she waited, ready to parry or dodge anything Kaito threw her way. However, after any assault or attack he made, Kimitsuki would zip through her fire in a sudden burst of movement; intending to throw him off.

After throwing him off, Kimitsuki would fly out of her fire, swiping her sword in a way that was intended to slam Kaito's Asauchi from his hand. Afterwards, with what seemed like a draconic roar, Kimitsuki's mouth would open and a gout of fire would burst forth. Breathing fire like a dragon, Kaito would likely get scared shitless by Kimitsuki doing this sudden action. However, even if the fire was bright and painful for his eyes to look at; it was completely heatless. With her liberation flame, she briefly liberated the fire coming from her mouth of heat and the capability to burn; instead only being quite bright, with the full intention to temporarily blind Kaito due to the intense direct light.

"You and Hiroe... You both show great promise. I look forward to seeing what you new Shinigami grow up to become~"

KAITO TOMOYUKI | GHOST OF THE RUKONGAI
As she walked out the flames, only for him to extinguish them, he kept his sword pointed ready. Even if she was leagues above him, he would still try his hardest. He drew the Asauchi from its sheath, keeping it in his other hand as she spoke. It was hard to ignore the sound of the fire with how loud it was, but, he kept his eyes on her, focusing. As she slipped out of the way, his eyes looked to the corners of his vision, not seeing a shadow move.

He couldn't rely on his sight for this. But, a moment later, he felt an instinct telling him to lean back, something from the right. Taking a half-step back, he leaned back slightly, dropping his sheath to quickly grab the sword with both hands as she suddenly flew at him, swiping at his sword. Keeping a firm grip on it, he skidded back a foot or so, keeping his sword held close to him.

But, he ducked as she opened her mouth and unleashed a torrent of fire. Stumbling and falling onto his back, he kept his sword close to his chest, turning his head away, blinded by the sudden flash of light from the fire. As the brightness dimmed down, he peeked, slowly opened his eyes to look at her with wide-eyed fear and awe.