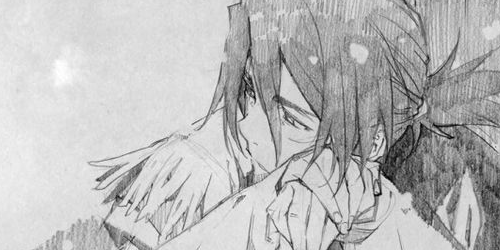 KAITO TOMOYUKI | GHOST OF THE RUKONGAI
Kaito's game plan through the academy was to apply himself as best he could. He wasn't some prodigy of Kido or anything like that, but, he had the willingness to learn. Despite this, it was still surprising to see a name that he didn't recognize. Hono Kaen, someone from the Sixth Division, the Realm Enforcement Bureau. The number and name caught his attention. He had heard about the Sixth Division and the Rukongai's Police Force, the Sakutaiso.

Beyond everything else, those were his goals -- and to see an opportunity to learn about the division right in front of him was a chance that he wasn't going to ignore. He had put in a request to meet with her, and now, Kaito quickly made his way to one of the practice areas. Without even thinking, he grabbed his training sword and Asauchi and rushed to the grounds. As expected of rushing out the door, he arrived a bit early, and he sat down to catch his breath and wait for her.

Hono Kaen
Artist: - Song: - Word Count: 123
Man, it's crazy, it wasn't everyday you got requested specifically for training. Though, Hono couldn't say no! It seems like her skills were finally being recognized~ What skill? Well we weren't exactly sure. She would make her ways towards their meeting spot. Kaito, couldn't say she knew the boy. Though she was expecting big things! After all, the academy was suppose to produce the best of the best Shinigami's right?

As she arrived, she would find the boy sitting down, with a training sword in hand. Oh? He was wanting to fight huh? Hono would quickly speak out. "Oi? You're Kaito right?" She would ask curiously. Analyzing the boy's appearance, trying to learn as much as she could before they even started talking.
Coding in Template By:
https://www.platinumhearts.net/u1

KAITO TOMOYUKI | GHOST OF THE RUKONGAI
Finally catching his breath as someone walked in, Kaito stood up, leaving his training sword on the ground next to him as he offered a light wave, smiling.

He picked his training sword off the ground, neatly tucking away in the side of his uniform. Easy to put away, easy to take out. He straightened out his uniform, before looking over her -- they were both analyzing one another by this point. She seemed to be relatively ordinary -- not that it was a bad thing -- and Kaito soon took to responding.

"Sorry if it was a bit out of the blue to request you, I noticed that you were part of the Realm Enforcement Division and I wanted to see what you were all about. I'm trying to learn about the Gotei's divisions and members, figuring out where I might work the best. Realm Enforcement's currently the go-to choice."

A division where he could reasonable focus his time and resources on the Soul Society itself, in addition to learning of the Sakutaiso. It was looking more and more to be what his choice would be when he graduated, and well, if he was going to pick that out, learning of the members and getting a feel for them, socially and combatively, was the most obvious decision to him.

Hono Kaen
Artist: - Song: - Word Count: 130/b]
Well, the first thing Hono would do, nods her head in response. Hearing her full name was usually not a good thing, but thankfully it wasn't her captain saying it. So it took a weight off her shoulder, no pressure Hono.

"Yep! Pleasure to meet yah~!" Her hands were placed on her hips and she would bow her head towards him.

Though Hono was still unsure why she was requested out of all the six divison members. Guess that was something she was going to need to ask right now she just wanted to figure out what Kaito was asking for.

"Oh? Why'd you pick little ol me?" She would ask. "You just wanna shadow me? I can give you a little rundown of what we do." Hono would clarify.
[b]Coding in Template By:
https://www.platinumhearts.net/u1

KAITO TOMOYUKI | GHOST OF THE RUKONGAI
It was a bit strange for someone officially indicted into the Gotei to be bowing her head toward him. He blinked a few times, before managing to get something out.

"O-Oh, you don't need to do that for me. I'm just an academy student, I should be the one bowing to you."

But, she wasn't one to dance around the questions she had, it seemed. Wondering why he had picked her above everyone else in the division. Well, it wouldn't really be proper of a student to go asking the Captain, Vice Captain, or Seated Members for something like this, now would it? From what the talk around the academy was, there were rumors about some big incident happening in the World of the Living.

"Well, yes, that was something I wanted to do. I just didn't want to bother the higher ups when they're...probably busy and have more important things to handle that letting some random student shadow them. If you could give me a rundown of it, that would be fantastic. All I really know is some basic information and the fact that your division works with the...Sakutaiso, I think? The Rukon Police Force?"

Hono Kaen
Artist: - Song: - Word Count: 181
"Yep. This kid is a weirdo" Hono thought to herself, but hey, weird was better than being boring.

"Please, I'm not a seated officer or anything" The girl would let out a rather soft chuckle, showing she wasn't some sticker for being formal. "Bowing to me? Not into that kind of thing, plus women are more my type~" She would add winking, hopefully, this would let Kaito know he could be casual around her.

"Ah! yeah, I don't think you'd like Makoto... She's abrasive..." coming to a regular member did make a whole lot of sense. "Well, you pretty much got it on the nose. Sixth Divison doesn't really leave Soul Society much, we keep the peace inside Soul Society" She tapped her chin, thinking of the correct words to use. "Patrols, Prison. If there's an issue we're on it!" She called back to what Kaito said just a few moments ago. "Why's this your first choice? No offense but, we're not the most... exciting division..." Hono loved her division but from an outsider, it was a division without much flair.
Coding in Template By:
https://www.platinumhearts.net/u1

KAITO TOMOYUKI | GHOST OF THE RUKONGAI
Oh, she was...oh. That...well, he wasn't really sure how to respond to that, if he should even respond at all. He respected her interests, if nothing else. A quick wink from her only earned a quiet nod of his head as she continued to speak. Being unable to leave the Soul Society much didn't really bother him -- most of his concerns lay within anyhow.

"Well, I'm not really interested in flair or dramatics. The Sixth Division fits my own goals better than any other. Staying in the Soul Society isn't really too big of a downside if I can use what I have to better the Rukongai and give back to the people in my life."

He gave a bashful smile, rubbing the back of his neck. No matter how many times he said it, it was always a little awkward to realize how simple his goals were, but still had the drive to find and use everything that he could in order to do that.

"And, I wanted to see what all I would be getting myself into with this division. Meet the people who might be my future coworkers, that kind of thing."