When a Rose Withers (open)

Rola was certainly interested in what capabilities Nickcca's weapon held in secret. Making chains was probably not the only thing it could do and his answer was given quite quickly. As he continued to launch his volley of bullets, he realised he was actually striking a lot more often than he predicted. "What's this?... something is wrong" And that was the last thing he said before he realised Nickcca was now inches away. Hadn't he been paying attention? Rola lowered the number of bullets firing but that must have given him a faster appearance.

Then out of the blue, Chains shot at Rola causing his arms to be yanked to his sides and his body to be tied in chains. Then before he could attempt to break this, fists of super strength slammed repeatedly into his gut winding him pretty badly. "how the?... " Rola looked at Nickca's face which now held a bit more evil than it had before. Something was not right with this bloke and Rola didn't want to bet his life on training him. But he can't back down now because that would show weakness and hatred. Rola had neither of these.

Under his breath, he slowly said a few words. "I apologise if this is a bit too.... harsh" Then he threw his head up to stare at nickcca once more and he yelled through grinding teeth. "BANKAI!" Suddenly, his entire body shot into flames setting everything about him on fire. Then a series of bullets pierced a slight explosion in the sky where a metallic crushing sound burst through. This, then revealed a giant man made of steel. His entire body was bright red and covered in frilly decorations of white and yellow. His joints were a deep black as well as a mask over his face. This was the Valkarie of Fire, Servant of the gods. 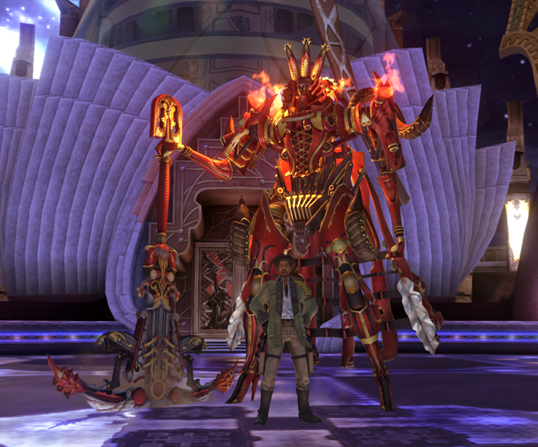 "HIKAMI BRETHENDIL!" As he said those words, the giant mech sent flames across the sky with yet another explosion. It swung its long stave around its body before flicking it to the floor in a sweet pose. Rola now stood just in front of it with a big grin and his guns to his hips in his own cool pose.

"haha, Ok then my friend, looks like even my shikai cant keep up with your powers. Luckily, i had this trick up my sleeve. If you want to learn bankai then the best thing i can do for you is fight with a Bankai. Then, you will be able to see exactly what you could be capable of. Who knows, you might have one of those crucial death anime moments where the hero turns into a nine tailed fox." Rola began to laugh happily before whispering: "Hopefully you would be cooler than a fox right?"

Nickcca look at his bankai hi srim kturn a pcothic one and bust out laughting and filled with exmeant and started swinging his chians aboutaround his like in a ruido show and wiith that he spoke cocky. " You got to kidding that a bankai a doll on fire this not Nickcca not anymore Puppet come play to will shamsh that dool of yours then you yes indeed ishmash you indeed poor Nickcca ....look you won't be lrenaifn atfer part a minor in pian liek you will be." with that Nickcca lucnh himslef at the this thing he called a doll he swing his chian about like a mad man but aim for the doll he going to tie it up if he can at all and thorw agiest the wall.Then he follow by rewarping the chain with both arms to use it power agian to samah the dam thing in two this will a open poitn for Rola if aware of the neddle next to cliam him and injecting him with it.

"So you think your simple chain shikai is gonna be enough to take out the defender of the gods? Brethendil isn't just a doll, she is gonna kick your ass. Brethendil! Incinerate!"

As Rola said these words, the chains wrapped around the hulking metal humanoid and tugged onto it tightly. Without showing any emotion whatsoever nor any pain, the giant behemoth swung its body to the side slightly and blazed over in a shell of flames. Its entire body was now completely covered in fire, repelling the chains as they struck.

Rola began to laugh as he watched his majestic guardian defend so beautifully and then aimed to to go into the offensive. Brethendil swung its stave-like lance around its head before holding it in a samurai fashion. Then in one huge sweep of fire, Brethendil leapt forwards and span around holding the weapon out causing a catastrophic blaze in a crescent shape across the ground where Nickcca stood. If he was smart enough, this boy will move out of the way of this max offence Bankai.