Yoma had spent most of the day reading books that he happened to obtain relating to Kidō. The books he had were more about the history of Kidō and he was annoyed he couldn't learn anything from the book about how to use Kidō. Yoma got up from the bench he was laying on, placing the books neatly on the side on the bench and walked towards some of the trees that happened to be in the area. the area around him seemed to be deserted and it was very quiet you could here . the other buildings nearby weren't too far from him and they all seemed compacted together all of them being the same shade of white it had seemed boring to yoma. the 8 trees all seemed to be 15 feet from another. Sakura trees like the ones around yoma seemed to be quite popular as yoma had seen them all over the place in the seireitei. he had bashed his head into a tree not too long ago and he doesn't remember how much it had hurt but he doesn't remember why he did or more like he doesn't want to recall why he did it.

Yoma attempted to strike the leaves that fell the Sakura trees in order to sharpen his skill with his Zanpakutō but after every attempt he would miss his swing and fall down. Yoma had repeated this a few times but continued to fail to others passing by he would probably looks like an idiot but this didn't stop him. he kept getting up and trying some more until he finally cut one. He was so excited and full of energy that he was swing his blade around recklessly and carelessly. He could have injured himself from the way he was waving the blade and it had seemed like it was just a toy to him.

You idiot stop waving that sword like that your going to injure yourself! That is a Zanpakutō not a play thing stop being such a child!

"Awe come on just have a little fun will ya? Its not like i hurt anyone and look no one is around for me to hurt anyways."

Just stop what you are doing and do some damn training you know how much i hate your stupitly!

Yoma was having an argument with his other half and to others it would seem he is just crazy for arguing with himself. He returned to trying to increase the speed of which he moves his Zanpakutō but he continued to miss striking the falling leaves on the Sakura tree. he would only be able to strike them once the leaves got into a certain position while falling. After some time yoma tossed himself to the ground and held his Zanpakutō to his side.

"Why is training so damn hard?"

Yoma pouted for a moment on the ground. he wanted to get stronger but knew he couldn't if he didn't find a way to train correctly or with out some out side help nothing would be accomplished for him. 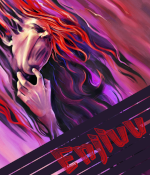 In a passing primo who has taken time out from his usual charades of lollygagging and acting a fool all over and normally it’s what he is prone to do when not training or finding something interesting to entertain himself. Its times like this that he wished his papers were looked over quickly so he could jump into a squad and find out what else he is capable of. Others that have seen him can’t begin to perceive his attitude or behavior in any way since he doesn’t give much room for them to make an evident action towards. The features to Primo are very well noticed by those that take a gander at him. He has nearly no level of respect for how he wants to be seen with his unkempt and shaggy hair or the unshaved stubbles which line his chin and cheeks. It’s as if he always just woke up from a long overdue nape with those droopy eyes that stare off into nothingness.

Noticing a rather usual officer from what it appears swinging and playing with himself from one glance, Primo figures he’ll try and strike up a decent conversation and find out more about this guy to see if he’s of interest at all to him. “Why not I got time, those papers were submitted yesterday evening and its already close to the end of this day and still no response as of yet,” Like a normal he speaks just soft enough for only his ears to hear since he cares very little about others.

“Hey having trouble I take it?.”

Despite being several feet away from the guy his voice is calm and just loud enough when he wants it to be towards anyone. Asking the fellow a simple question which like any typical engaged gesture takes upon itself. Cause and effect is what sways two parties to either like another or have ill feelings back. Carrying his Zanpakutō beside the left side which is tied up in a fashion giving anyone the idea that Primo has to be someone that does not practice for others to witness or he is very comfortable with his own workings that he won’t have to go show off them so carelessly. With a relaxed posture the man waits to see just how this new fellow will answer him though he can already seem to think that the man sitting on the ground looks as if he has a lot that is already bugging the shit out of him.
__________________