Coding in template By: Aivee
Graphics and Edits by: CPKallday

BORED OF DOING IT, WILL FINISH LATER.


STEP FORTH INTO THE SMOKE


EZEKIEL JACKSON IN A NUTSHELL

» Name: What is the name of the character?

» Gender: Is the character male or female?

» Personality: What is the character like? Are they friendly? Mean? A couple sentences will do.

» Appearance: You may use a picture or you can describe what the character looks like in a few sentences.


THE ORIGINS OF EZEKIEL JACKSON

» Brief History: One or more paragraphs on how the character came to be. Have they been through any hardships? How did they come across the PC they are associated with? What is their goal


THE POWERS OF THE ADDICT

» Basic Powers:
Only basic powers for any race. Unless Admin says otherwise. 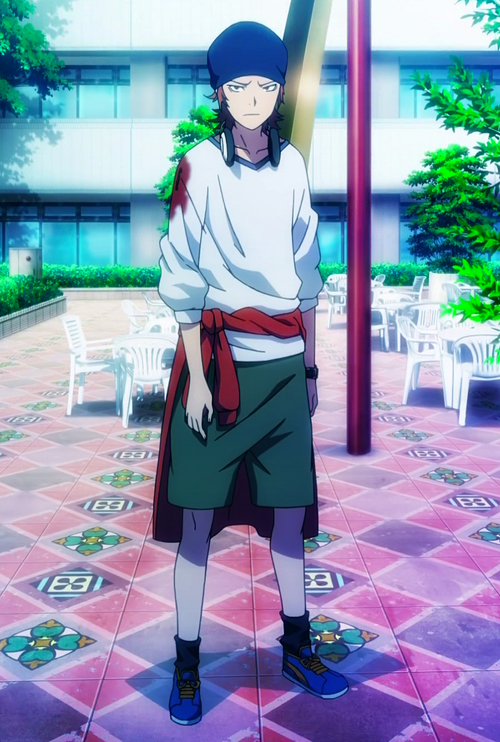 "I'm a straight up G!"
Although the gangster life may not be for him, he certainly does try. He wears baggy clothes and his pants always seem to be seeping down from his waist. Even though he wears a belt. He uses certain slang words to try to embellish this stereotype into him, and isn't much of one to treat his elders with respect. All except for his mom at least.

You'll most likely find him listening to really heavy beats and stuff while he tries to make his own freestyles under his breath. His mom didn't spend all that money on those headphones for nothing.

"Meh, I don't really care."
A very carefree kid. However this sense of being carefree is due to his lack in ability to make decisions on the spot. As he is a deep thinker, therefore is someone asks him to make a decision he simply tells them I don't care rather than going into an all out meditation session.

"Leave me alone!"
Typically he treats those that mess around with him about his hair or just make fun too much. He's all for a little banter every now and again, but make it habitual and he most likely will hate you, especially if you call him a ginger.

"I'm going to be a kid forever... syke."
Very mature for his age, though he sometimes doesn't portray the trait his intelligence and ability to catch on to things are rather impressive. However, he still does have a lot to learn about life, it's just for the touchy things such as doing well in school and having a good future. As well as being good to his mother that makes him seem a bit more mature than the other kids who would rather hang out with there friends and ditch school, rather than being around their mother or studying.

"When I grow up I want to be... a douche bag. Bitches love douchebags."
Not seriously, though. As he pretty much already is one, however he does take a keen liking to the ladies for his age. His overall bluntness, mixed with how irritable he can be around others just not wanting to be bothered at times can make him seem as though he is a dick.

Born in Suburbs of central Florida within the United States Lorin and his family lived a slightly hard life. With his father having no real skill, or education he struggled to find a job that didn't have to do with mopping the floors at the local Malls. However, it did pay the bills that they had, but left little room for Lorin to have things that he would need as a infant and child. His mother on the other hand had a bachelor's degree in Health and Nutrition, which wasn't very useful as nobody exactly wanted to be told what to eat and what not to eat when it came to Florida.

It had always been the families dream to move to California where all the stars live and for his mother, Margret, to be a diet planner for big hit celebrities. However, that wouldn't happen as she had Lorin at the age of 20 which was two years before she graduated from college. Though, it just goes to show how much willpower and focus Margret had for finishing up school in order to provide for her child.

As Lorin progressed to the age of four, Margret had decided that she would go somewhere that she could make a difference and put her degree to use. So, she started filling out applications to various places around the world until she finally received a call back from a dietary clinic in Karakura Town, Japan. Excited, Margret immediately began packing and got on the next flight with young Lorin leaving his father in the dust with no sign of where they went.

As the years went by Lorin attended school and always stayed on top of his studies. However, being so interested in school always seems to have it's affects on the kids around you. Therefore, he was subject to being bullied in school, for being a "nerd" when he really isn't one he's just dedicated to have a better life for himself and for being a soulless ginger. As time went on he learned that people would always be there to bring you down, and all he could do was prove them wrong and be more successful than they would be.

Carrying on through school he is now a Freshman at Karakura High, and coming into a new school means new adventures, friends, and opportunities as he makes plans to start socializing and meeting new people. Perhaps even find out certain things about himself that he could ever see possible...

Graphics and Coding by: CPKallday