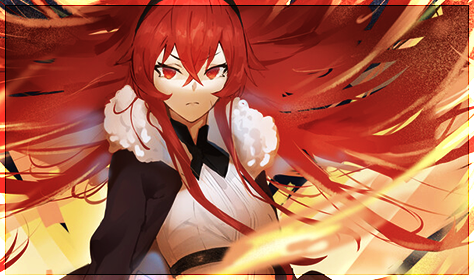 Emelie Anderson | Daddy's Little Girl
Emelie was the last person you'd find exerting herself so physically just to prove a point. Normally, if it were with anyone else, this would be considered child's play, a joke. Sol was a man that held quite a lot of importance to her unfortunately, leaving her with little to no option when it came to his challenge. She knew she was slower, keeping up was all that mattered to the man. So she did, every foot, every step. Though she lagged behind, Emelie was well within reach of Sol's own steps, a considerable effort she would say.

Finally, as the two came to a screeching halt deep into the Rukongai, Emelie let out a muffled scream before shoving her finger in his direction.

"I HATE surprises!!! Not even that but you've got me all sweaty and worked up now!"

Emelie's words left her mouth without any sense of worry in her mind. She could have worded things a bit better given, you know, sweaty and worked up wasn't exactly the most appropriate way to describe activity. Despite that, it flew right over her head. Words came with intent and, as Sol would know very well, her intent was clear. Emelie despised the idea of a surprise, to remove any sense of knowledge from a situation was heretical. It was the most disrespectful thing he could do.

"My legs work just fine thank you very much."

She audibly scoffed before stepping closer to him and shaking her head. Emelie was at the whim of his choices, as per the usual. She should work on getting to know the Rukongai a bit better.

"Let's just get going again. I'm at your mercy unfortunately."

He lets out a laugh at everything she said while walking, pivoting on his foot to look at her as he walked backwards. He wasn’t really concerned with bumping into people, his awareness was far too high to have that happen without some great distraction. Instead he seemed to have a sly smile on his lips, seemingly gaining joy out of her annoyance at the frustrating situation he placed her in.

“You really should pick your words better, might give people the wrong idea, Em.” He’d point out not really all that concern with it, she’d either take his advice or disregard. Not that he had any real intention to change her, after all he knew what he was getting into with being her friend. “Anyway, if it’s any consolation we won’t have to run anymore.”He’d remark as he pivoted on his foot leading her towards the great large gates of the Rukongai, a hand coming onto his brow to see the path ahead.

“Can’t believe I’m about to be done with the Academy. Didn’t think I’d take so well to this shinigami stuff.” He’d say out of the blue finally, his hands coming to rest behind his head as they walked.