Rio had to admit that the stroke of luck life blessed her felt quite grand. It was the type of luck she wouldn't have expected a year ago. She was making friends now. Well, she always had friends, even a boyfriend at some point in the recent years.

Perhaps, it was the nature of how she was coming across them now, how she could actually step out and hang out with them rather than keep herself isolated and play to the tune of that noble image that held her back for so many years. She was feeling herself, really, and there was no sign of that stopping anytime soon. Rio still felt like herself, of course, but equally enjoyed walking around with an air of freedom.

The last chain that held her in thrall had finally been released. She had a rival now, although she'd have to wait until she was strong enough to compete with her and clash again. Oh well. They could still spar with one another, at the very least. And she couldn't forget her recent pal, Igen. That vibrant shinigami probably didn't realize it but he definitely had a hand in this, too. One night of letting loose, sparring like a grunt, and drinking the hours away had opened her to a world of possibilities.

Rio wondered... what if she could have more of that? More people to meet? To interact with? It was food for thought. Therefore, although it may have come as a shock to some of the civilians, Rio was seen casually wandering around with a playful pep in her step in the Seireitei, a gait so carefree that it appeared as if nothing in the world would stop her from seeing if she could meet another person of interest, by chance or by her own hand. 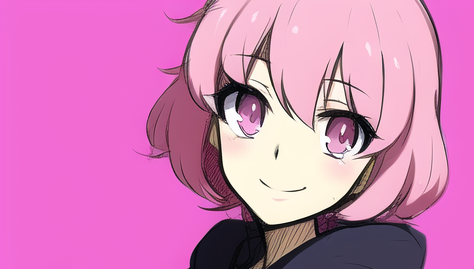 MACHIHARA MOE | The Bubblegum Oni
It would be easy for most people to miss Moe as she wandered around the Seireitei, she was not exactly a large target after all. But the bob of pink hair did help, even if it was just below most people's eye level. She squeezed through the crowds without much trouble, humming her own little tune as she went. There were a few things on her mind rather than exactly where she was going, so it was little surprise when she rounded a corner and crashed straight into another woman.

Of the two, Moe definitely came off the worse as she bounced back from the impact and landed flat on her ass. Snapping her back into the moment with a crash, those large pink eyes blinked several times in succession before looking up at the woman she had crashed into. A hand rose to massage the back of her neck, nursing it after the shock.

Rio simply stared down at the smaller woman on the ground, blinking her eyes as she noted her condition. She was relatively fine. Moe took the worst of it, no doubt, but Rio brought a hand towards her, offering to help the woman up if she so desired to be helped of course. Some people tended to hold their fair share of pride on those things, even for something as casual as a bump in public. Still, the offer was there if she chose to indulge it.

"I feel just fine, honestly. From the looks of things, I think you took the worst of it. Here, let me help you up."

MACHIHARA MOE | The Bubblegum Oni
Moe was certainly prideful, but she was also far from being above refusing help. She grabbed tightly upon the wrist of the offered arm, letting her own wrist be held in turn, and then hopped back to her feet with a little tug.

"Thank ya kindly. I should try to keep an eye on where I'm going anyway, huh? Anyway, take care!~"

Flashing a cheery smile, Moe took all of a single step away from the woman before she doubled over again. She had taken quite the fall, right on her butt, and now there was a numbness shooting up her spine from the impact. It hurt to walk, which was a weird sensation, and suddenly she didn't know quite what to do. A rather pained glance shot back to the woman, confused as she no doubt was.

Rio was prepared to continue on in her general direction after offering the pink-haired woman a smile as she walked off. Moe seemed poised to do the same as well, until she doubled over, stopping in her tracks. That was certainly cause for worry. Despite her graceful appearance, Rio's body was quite durable. One might liken it to hitting into iron. Visibly confused herself, Rio gazed at Moe with a look of worry in those golden eyes. That sisterly nature of hers kicked in and she approached the woman from behind, offering her arm towards her if Moe needed to balance herself.

"It seems the impact may have been harder than we both intended. I don't know what's going on exactly, but I'd probably feel terrible if you were unable to walk correctly for the rest of the day. My name is Rio. Rio Shihoin. If you need to relax until the pain goes away, I can find somewhere for us to sit. At the very least, I'd like to make sure you're okay."

MACHIHARA MOE | The Bubblegum Oni
"Ooh, I think I must have landed right on my tailbone."

Moe groaned as she looked back at the arm being offered to her, gritting her teeth before tumbling into the embrace. She just ached around the midsection now, not to the point of genuine concern like some serious injury, but having a rest didn't sound like a bad idea. Rio had been even tougher than she looked, she had to give her credit for that, even if it was why Moe was now in pain.

"Thanks again, looks like I could use some help getting off the street. I'm Moe Machihara, by the way, and sorry for burdening ya with me Miss Shihoin."

Rio offered a reassuring smile, allowing the woman to fall into her embrace. It was hardly an inconvenience to her. As far as she was concerned, the real inconvenience would be watching her struggle to walk off and spend her day worrying about the woman she bumped into and inadvertently injured. She'd look toward the closest shop, a small food place with a few seats outside. She'd guide the woman there, holding her light frame so she didn't stumble anymore than needed.

"Don't worry about it, Moe. I'm anything but burdened. I get to meet someone new, and to me, I'd say that's a highlight of the day. The real burden would be having to watch you struggle to walk. Oh, and no need to worry about being formal. Rio is fine with me. Would you like something to eat while we sit down and talk? Something to pass the time, perhaps."

MACHIHARA MOE | The Bubblegum Oni
"Now you're making it sounds like ya wanted me to run into ya, hehe~"

As petite as she was, there was still a little weight to Moe's frame. She carried an impressive amount of muscle for her size, or at least she thought that she did, and that was usually enough to start throwing people around. Still, it was easy enough for Rio to womanhandle her over to a nearby shop and onto the chairs. Moe didn't sit down though, choosing instead to lie on her side and avoid putting more pressure on the pain spot for a minute.

"Thanks, Rio, but I--" She really didn't want to impose, but her tummy did then begin to grumble as the smell of food wafted over them causing her cheeks to flush with pink. "Okay, some food sounds good right now."

"Ah, shoot. You got me. I've been found out." Rio offered Moe a bright smile, chuckling softly, comfortably relaxing into a seat across the table from the pink-haired Shinigami. She wouldn't be so bold as to say an accidental bump was the way she wanted to make a new friend during her trip in town, especially when her bump effectively - even if momentarily - compromised another person's day. On the other hand, it was always nice to meet a new people. She found that to be one of the more joyous benefits of the carefree path she currently occupied. Initially, Moe didn't seem to be keen on imposing on Rio, but that grumble in her belly told a different tale. Rio didn't mind treating the woman to a meal. She wasn't struggling to make ends meet. Why not make it worth the woman's time while she recovered?

"As I thought. The body never lies. Well, I don't mind. Is there anything that catches your eye? Ramen? A dessert of some kind? Think of it as just another way of me extending my apology."

MACHIHARA MOE | The Bubblegum Oni
It was bad enough that her tummy was grumbling, and now Rio was assaulting her with different foods. Oh heavens, everything sounded so good right now. It wasn't her fault she was a growing girl with an appetite to match, or so she at least dared to hope.

Moe reached into the folds of her uniform, offering forth a little coinpurse in the shape of a cat with ears attached. She couldn't really move without making herself more uncomfortable so it was the least she could do. It hadn't really crossed her mind exactly who Rio was until she finally began to process all that had happened, the blush upon her cheeks only growing a shade more intense as she recalled.

"Wait, you're a Shihoin! Oh man, you were probably really busy, I'm sorry!"