Kitty Cat Yugirin
She had grown used to this, just staying in cat form. Ever since the trip to America she had opted to just be the cat of the group. Well, the talking cat of the group. She was wandering around and taking in the foreign land which she had admittedly been lazy in doing.

So naturally she had to be doing something to fill her time that was different and that was stalking the group. It's not like she was shy or anything, she adamantly rejected the folly. She just didn't want to talk to them, maybe she would talk to them once she got a better grasp of them but that blonde girl really annoyed her. The pink hair guy was a bit more mysterious. So she was sitting in a tree and watching him.

Not creepily at all. For the record. 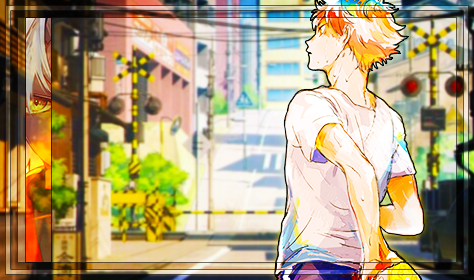 Despite the odd bunch that they were, Saisei found himself enjoying his time with the tumultuous trio. It wasn't normally his cup of tea given his own circumstances. Nevertheless, this didn't keep him from learning quite a bit in his time with the three. For instance, it's okay to be hyper and outgoing. Or, speaking your mind and fulfilling your thirst for knowledge isn't as weird as you may think. The boy could continue learning from them, he hoped at least.

There was a single outlier, a pin in the sheets that simply could not be found. The small cat that found herself travelling alongside the group was yet another mystery that Saisei couldn't find an answer to. No matter how hard he tried, Yugiri continued to keep to herself. It was almost as if the black feline had a secret or two that she just couldn't help but keep from others. That, to nobody's surprise, was Saisei's target.

Each member of the group happened to be by themselves, doing their own thing for a change. Standing from the small bench he personally occupied, he jogged himself quietly to the nearby tree that the feline occupied. As eerily creepy as her gaze was, Saisei figured her eyeing could only mean a vested interest in him. Clearing his throat to catch the cat's attention, he began his quest.

"Nice day outside, is the sun that harsh for a cat like yourself, or? Can't imagine you're keepin' yourself busy given how quiet it seems to be around here, right?"

Their time in America came with very little excitement, ever since they found themselves on solid ground again the whole country seemed to be up in arms, figured given the world's state. Maybe if he could distract her enough, Saisei would finally find the answer to this mystery.

Kitty Cat Yugirin
To say he was a topic of interest was uncertain at best, like balancing on a log, you never discounted the possibility of losing your sure-footing and Yugiri thought he was just the next best thing to Erchanhardt. Given Micaiah was really loud and annoying, Saisei was at least quieter.

Albeit also queer. She felt he was very weird given their first encounter was him trying to learn to swim, like who didn't know how to swim at his age? She could totally swim. Well not really, but she didn't need to swim so why would she waste time doing that? She could just fly. That's a thing shinigami and cats could do.

When he spoke up to her Yugiri looked down and flicked her tail thoughtfully.

She didn't really know what to answer in response to the second part.

"You're sittin' in a bunch 'uh shade. That doesn't got anything to do with it? The heat?"

Placing his hands on his hips, the boy was a loss for words. Not only did she speak briefly, she was just as one would expect from a cat. Well, as much of a real cat as she was. He figured she at least found him more enjoyable than the blonde they traveled with. As much as he had gotten used to it, loud and obnoxious people were, well, loud and obnoxious.

"Cat things. Right. What fun is there in that, though? I mean I don't know everyone as much as y'all would, but I figured you had some kinda reason for findin' your way over to America. Right?"

As to the point as Yugiri may be, Saisei would find it difficult to ever return in kind. After all, the boy always found himself getting into some kind of conversation for one reason or another. Stepping from under the shade of the tree back into the bright sun, he smiled.

"Don't you like findin' yourself learnin' something or another? I mean c'mon, you can't just lay around all day. Whatcha gonna learn from that?"

To be fair, he wasn't wrong. Saisei didn't really know whether the feline cared however. He doubted it.

Kitty Cat Yugirin
"...I guess, it's just nicer under the shade."

Maybe it was a bit hot for her but she also gravitated towards staying in the shade.

She didn't expect him to be satsified with her response but she was also trying to be dismissive. She was not a fan new people, a mixture of being anti-social and shy towards them.

"No. I just came because Erchanhardt came. The blonde is the only reason we're here, it's her fault I had to come here."

Maybe she got a little heated there, Micaiah did deserve to get her skateboard stolen that time... maybe it was by Yugiri but she had it coming and meeting her only affirmed this belief.

"I've already had ages to learn, I want to rest."

She spoke and laid down again, putting her chin on the branch like it was a smug statement of being able to do as she pleased while she was up here and he was down here.

"So you never wanted to really be here, did'ya? That's fair I guess."

"Guess thats fair. I don't necessarily believe everyone has the ability to cap out on learnin' things but to each their own."

Given how he treated things, his thirst for knowledge was definitely not normal for most. He turned away from the cat and watched as gentle clouds rolled from one side of the sky to the other. The endless blue waves above them made for quite the relaxing setting. America wasn't so bad, not as bad as everyone made it out to be.

"Wouldn't hurt to pass some of that knowledge on then, don't you think?"

The salmon colored boy turned back to the feline with a smug smirk. While Yugiri seemed entirely uninterested, Saisei couldn't help but challenge the cat's laziness. It was in his very nature to question, after all.

"If you've had ages to learn isn't it best to have that knowledge move on to someone else? I mean, y'know I'm a pretty powerful receptacle for this types of things. Or well, you don't personally know, but I do."

One step at a time, he thought. Surely he'd be able to learn something.

Kitty Cat Yugirin
This kid was persistent she thought as she thought to her closed eyelids. Letting him hang there for a moment before opening them and looking at him.

"What would you want to learn from a cat? How to lick everywhere on your body?"

It was a joke but she delivered it pretty dry with a flat tone. Probably taking away any of the humour she found in it herself. That's okay, it was a joke made for her benefit anyway.

While one would normally laugh and gallop away at the 'cat licking herself' joke, Saisei couldn't help but find himself far from amused. It wasn't that he was angry or even annoyed, the joke simply moved in one ear and out the other. Yugiri's tone and mannerisms simply egged on the notion that she was having an entirely normal conversation with the boy. As such, he responded in kind, as anyone with half a brain would.

"To be frank, I can't imagine what learning to lick myself would do for me in the long run. I'm the equivalent of a four year old in earth years, I have quite a lot to learn. Surely there must be something you know that I don't."

For a young boy, Saisei was relatively blunt with both his words and expectations. As the older individual, he expected Yugiri to know more than he ever could, meaning she would be required to divulge the information. At least, thats what he expected given his upbringing with the Royal Sugiura.

"Even a shred of information is worth infinitely more than I could get staring at the sky all day."

Kitty Cat Yugirin
Paws down. He was really persistent but he was earnest. It wasn't like Yugiri hadn't tried to teach some lessons at the Shino Academy. He wasn't a shinigami though, nor a cat. What information could she even divulge to him that he'd find fascinating?

Would anything appeal to him, maybe? Could she say random trivia and get an effect of jingling keys over his head.

She pondered. Flicking her tail back and forth thoughtfully.

"I suppose that works. What information does a kid like you think I am privvy to? No, just ask me questions. I'll tell you if I know the answer or not."

Yugiri conceded in her boyish tone.

Yugiri had finally accepted defeat yet the boy stood in silence, pondering a million and one things he could as the young feline. Saisei had no real plan for making it this. Nevertheless, that wouldn't stop the inquisitive boy from accepting his nature and venturing forth.

"Alright. If I can ask and you answer, that sounds like a good deal in my book. Lets see what I can work with..."

Left and right the boy moved, one foot after another. Each and every moment was dedicated to his first question for the feline, the conversation starter. Well, they had been talking already technically. That doesn't change anything in regards to his thought process. As Yugiri made clear, if he asks and she has the answer, she will give that information to the boy, no questions asked. That was a lot of power the tiny cat was leveraging to him.

"Alright, alright. I have my first question I believe. How about this, where are you from?"

Simple, straight to the point, easy to understand. Asking where Yugiri was from would let him ask a million questions in response, it was a no brainer.