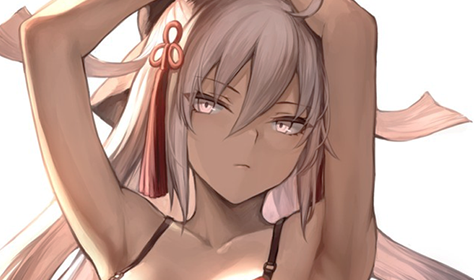 Yugiri
Yeah, that was the reaction she was looking for. Trying to keep herself upright was a challenge but it passed fairly quick and she wobbled less on her feet. It was a good thing he was quick on his pickup and did exactly what she wanted. Even down to looking away, he was such a gentleman. It was a little endearing and definitely saved him from any real consideration of beating him up.

When he threw the shirt and she caught it Yugiri sighed, beginning the process of getting it on and over until it sat on her petite frame more like a baggy dress than a top. Satisfied she let her hair uncoil, falling to reach her ankles from underneath his shirt.

"Eh? You're not handling this well, aren't boys supposed to be huge perverts or something? You know you're allowed to say the word breasts, right?"

She declared her accuasation, damning not just him but her view of young boys overall in the process before sliding in a smug taunt at the end. It was really hard not to grin from the whole exchange. Readjusting the shirt to sit on her properly when he reconnected with his original curiousity, she looked up with thoughtful silver eyes.

"You tell me, I said I'd give you a secret. Not all of my secrets. Maybe I'm a big scary monster in secret, I mean. How do you know this is the limit of my shapeshifting?"

For someone so stern and sharp, she was making a conceited effort to act play up her teasing attitude and watch him squirm as much as she could. It was a good thing she couldn't read his mind, only make judgements based on his face. Maybe she'd have slapped him if she knew the extent of his childish thoughts of the female feline.

"No. Why would I spend time as a human girl? No one gives a cat a second look."

She didn't want to admit it, but the chuuni in her liked how surprised he was. She must look so cool, he probably thought she was some kind of crazy weird cat thing that could shapeshift. 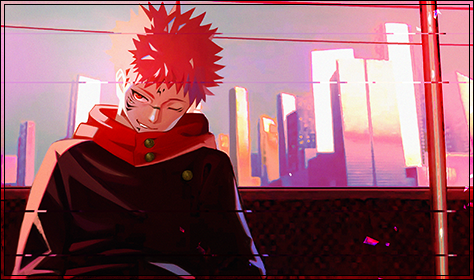 Saisei was washed with a wave of uncertainty. The presence of a near naked female held little bearing on his mood. Frankly, the last thing on the boy's mind was something of a sexual nature. Rather, his thoughts were filled with all the animals and people in the world. If Yugiri was simply another cat strolling along their way, what other kinds of animals were also people? The thought sent a shudder through his bones as he worried about his actions. Petting something sentient felt a little too awkward for him.

"Don't you think someone like me wouldn't be focused on clearly more important things?"

As Yugiri spoke of the word breasts, the boy shot her a dirty look now that she was fully clothed. She clearly had different intentions compared to his own. Learning her secret, while eye opening, was a moot point at this point. Now that the cat was literally out of the bag, Saisei huffed and crossed his arms.

"So you're a cat still. Cat first, human female second. What do you even get from that? Living the life of a feline would be relatively nice compared to the hell hole most venture through."

Saisei wasn't angry, he was perplexed. Why bother with ever shifting to human form when you could live life so... care free? He turned away from Yugiri and started to pace back and forth. Thought after thought, question after question. Saisei's inquisitive mind began to go to work.

"Shinigami cat. A cat who can turn human. If you can turn human, there must be more. Rhinos, giraffes, dogs. What else is common, sloths? Fish. Do you know any shapeshifting fish? If not, why wouldn't someone be interested in being a fish? The ocean is massive, that sounds fun."

He kept talking aloud, both to Yugiri and himself. The questions continued to flow without stopping.

"Maybe you're part of a group that can do it at will. Are there shapeshifting clans in the Soul Society? Maybe its an earth thing. Who else do you know that can shapeshift? I've gotta know."

The boy had lost it. With the knowledge of shapeshifting cats, time was the only deterrent aimed at stopping his questions. Yugiri had opened a can of worms she would soon regret, clearly.

Yugiri
This was not as she expected. In fact it was far from it, the immediate shock was funny but after he recovered she realised that she made an awful mistake. His curiousity exploded and sought to milk every bit of knowledge he could out of her body like a rag full of water that needed to be wringed. It was awful.

"Hey, kid. Stop it. I let you know the secret. I'm not just something you can turn into your new favourite thing to play with. You know it's rude to pry into people's lives, right?"

She knew that his questions extended to going beyond just asking about her and rather for the extended context of what it implied for Soul Society but this was Yugiri here. She didn't want to sit here and tell him all about these things he wanted to know after she confused him. Let him figure that out himself.

Yugiri's response was clear, she seemed almost disgusted with the boy's actions. To be fair, it was rather nasty to see someone so engrossed in such basic and normal things. Slapped back to reality, he smiled and rubbed the back of his head rather nonchalantly. He was being quite the weirdo, he thought. Waving her off as if he had never happened, Saisei spoke up and to offer an apology.

"Yeah, that's my bad. It is rude, you're not wrong. It came over me like a wave, can't help it some times. I'll back off a little, we still are closer to strangers than acquaintances after all."

His apology was sincere and genuine, as was everything else he ever said. An apology didn't take away from the fact that he really did hold all these interesting questions. While Yugiri would be answering them today, the boy hoped that eventually she'd take interest. Turning away and facing the bright blue sky above, the world around the two began to blur into one singular picture. He had pressured the feline far more than he wished, it was about time they caught back up with the others.

"So now I know your secret. Figure it's time for you to hop back into your pretty little black form and for us to be on our way, huh? Erchanhardt and Micaiah are surely waiting for us by now don't you think? I'm ready whenever you are."

Saisei had about enough for his tastes now. They came as four and intended on leaving as four he figured. If they loitered around any longer Saisei might find himself to a tight pickle that he'd never escape. What if Erchanhardt and Micaiah though he did something despicable to Yugiri like pet her without permission? He would never, he'd see the girl back to the group without fail. Mostly for his own sake.

Taking a mental photo to save his first memory with the woman, he smiled and turned back in a single swing of the hips.