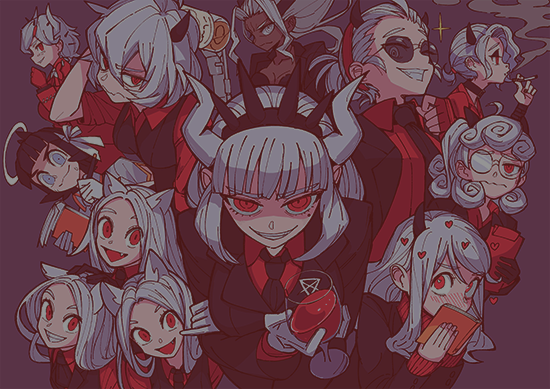 Structure: Moksha Tisrah following in the footsteps of its predecessor and learning from previous mistakes, Moksha Tisrah takes its leadership in a different direction while also extending its hand and influence over more of the demon world. One of the biggest changes that Moksha Tisrah has is the fact that it now takes a more governmental role in their territories, acting not only as the military but the governing body, allowing for those who don’t want to fight but still want a say to have the ability to apply to join as it is all in the same place. Rather than having groups inside the organization that all have their own pre-designated role, each chapter acts independent of each other and fills their own role that they decide upon, with a new chapter being founded when there is a need for one. Then, if there is a desire for another chapter to be made but it would fall under the category of another chapter, then they would create a sub-chapter. These sub-chapters have no limit though they aren’t necessarily tracked, and they still answer to the chapter Founder.

Major Decisions: Each Founder is given a seat on the council and are allowed to vote when it comes to major decisions which would affect either the organization, other chapters, or demonkind as a whole. Members of the royal family are allowed to vote on these matters as well, giving them two votes on the council while Founders only receive one. These can combine into three votes. If there is an even number of voters and the vote is split, then a random sub-chapter leader is allowed to vote to break the tie.

Enlisting: Because Moksha Tisrah is both the military and the government, there are not only combat-oriented roles but also political ones, however, all the political ones have much less influence when compared to the royal family and act more as community representatives if anything. All those in their territory are required to enlist for at least 2 years in their lifetime, regardless of race, however, they are not assigned to a chapter and allows for enlistees to pick a career that interests them the most.

Current Objective: The current objective of Moksha Tisrah is to rebuild and recuperate after their loss in the recent war. This is basically to gather resources and build up their army in case anything were to happen while also preparing for the future. Also, due to the sudden change of powers, there’s going to be a bit of reallocating assets and deciding on what to keep and what to not as they carry over into a new era in the demon realm.

Resources: TBA. Still being sorted out due to the new change in management.

Ranks:
Founders: Despite the name, Founders are not only the people who create a chapter, but also the title for those that lead them, making it that after one Founder dies or resigns another takes their place. The politics behind choosing another Founder varies depending on the Chapter though it's safe to say that most of the time it ends in a dispute between the subchapters to get their own respective leaders in the new vacant Founder position. While it would be easy to compare them to the captaincy of the Gotei, each Founder acts more like their own Captain Commander that collaborates with the other Founders towards a common goal.

The influence of each Founder is probably the highest in demon culture, second only to the Royal Family. It is assumed that as long as they have the support of another Founder, most Founders have access to the resources that the entire organization is able to use plus whatever they would have on their own.

The Rest: As this can change on a per-chapter basis, it is recommended that you contact the chapter Founder to find out if there is a position for you to fill.

Hounds of Devotion: The Hounds of Devotions, or rather the Hounds, fill the niche of having an easily accessible military force. Acting not only as of the line of defense but a place for those who wish to specialize in a certain field flourish, the Hounds of Devotion have a reputation of being some of the most elitist bunch that you will find among the MT despite not really being anything incredibly special at a glance.

In terms of combat roles, the Hounds end up being both the first line of defense and the last line of defense, acting somewhat like the Marines of America. If something dangerous needs done, then normally a Hound is sent as an ambassador or delegation. If a battle is being lost and needs to be swung in the favor of the MT, then it is the Hounds who are then deployed.

Most akin to a combat division in other organizations, however, combat is not the sole focus of the chapter. If anything they are more generalists and could be considered the infantry of the Moksha Tisrah.
Founder: Iota Asthavon (Core)

The Faithful: To put is simply, they are the special forces of the group.

Known as the Faithful since much of the organization rides on the back of their various operations to be successful. The Faithful are entrusted with the tasks that other chapters cannot do, not due to incompetency but rather due to political reasons. Because of this, anything pertaining to this chapter is always off the book and they are officially off record with everything involving them in a business capacity, virtually being a non-existent chapter. When it comes to council meetings, the Founder is required to watch and vote from a distance to be out of the public eye.

Due to the nature of their work, failure is not an option and requires skilled members to increase the success chance of their missions. Not for the light-hearted and new members are scouted rather than picking this group. To the public, for now at least, there is no Faithful.
Founder: Ky'rin (Core)

Royal Core: The Royal Core represents some of the Central Demon Kingdom's influence within the Moksha Tisrah. Therefore, this chapter's purpose is to enforce their law and instructions out in Demon World and other realms if need be. Ergo, many of the Asthavon Family's resources are put into this sector and they can be considered a royal guard of sorts. Typically they are not the first to deploy into a battle but can be called upon if the circumstance is dire enough.

Overall, based on the nature of their work, these members are hardcore loyalists to the kingdom and demons as a whole. They want what is best for their kind and will do whatever it takes to get the job done to fulfill that objective. Therefore, if one is to join The Royal Core, a desire to serve their fellow demonic sister and brothers is needed.
Founder: Algos (Core)

Code:
<b>Name:</b> Your character name
<b>Link:</b> To your application
<b>Chapter:</b> Choose one of the chapters that exist
<b>Subchapter:</b> If it applies. If not, then type Core.