KOIZUMI SHISHIYUKI
Any sense that Shishiyuki might have had of being too forward was certainly lost within the next few moments, as she had not been prepared for such a thing. Did she mind it? No, very certainly not, and she let out a quiet noise of pleasure at the feeling as Makoto moved her kisses lower.

If it weren't for the intimacy of the moment, she frankly would have been embarrassed at such a thing, but instead it only made her feel even further committed to it. If that was the nature of this, what else could she do but return the gesture in kind? Her hands moved lower, from Makoto's waist to her hips, though the knowledge of where she might go from there was enough to keep her from being able to decide on any one path immediately.

Well, Shishiyuki didn't mind terribly if Makoto continued to take charge for now. If anything, she rather enjoyed it.

MAKOTO ARIMA
It wasn't something she was prepared for, she knew sounds like that occurred after all but hearing it from Shishiyuki caused all the turmoil of her mind to come to a standstil and those conflicting thoughts silenced by that small noise. What did that evoke from her? How did she feel about that? Her body liked it, it had sent a small chill up her spine after all when she heard it and her thoughts wanted to stop arguing just to try and remember that sound for as long as possible.

She asked knowing full well that she did, Makoto wasn't ignorant to it but she did want to hear her say it and validate what that sound meant. It was exciting, to know that she could make her girlfriend respond well to her actions and a confidence boost was exactly what she wanted, needed.

She could have returned with some sort of teasing response, some banter that Shishiyuki was quite certain was considered the norm in romantic situations such as this. But honesty remained her chosen course of action, and in a case such as this, it did not feel even practical to step around the truth of the matter. Besides, what else might she say?

"Would it be terribly selfish if I asked that you continue?"

Her own efforts certainly hadn't ceased just yet. Though she was hardly pushing particularly aggressively, her hands had now moved under Makoto's shirt, not toward anywhere genuinely untoward, but once more resting on her waist. The difference, however, was the contact between the two of them, without the cloth between them. It was different, and frankly, Shishiyuki preferred it.

MAKOTO ARIMA
Continue? Makoto wondered how she could continue, just keep kissing? She tentatively continued with small kisses planted on her neck before she got a bit more exploratory and she came up to nip her ear in her instinctual actions. Was she correct to do that? Would she like it? Only the sounds that Shishiyuki made might tell but the sensation of Shishiyuki's calloused hands making themselves at home under her shirt and touching the bare skin felt strange.

Warm? Hot? It was a long time that she didn't recoil from that feeling of her body or felt disgust whenever it happened. This felt nice though without the barrier of her clothes to obstruct her from the skin underneath, she preferred it quite a bit more.

"Are you comfortable in this spot?"

There were other places where they could move in here, rather than sitting awkwardly at the kotatsu.

KOIZUMI SHISHIYUKI
Another moan slipped from Shishiyuki's lips, and while she likely could have kept herself from letting such a thing from happening, she certainly had no intention of doing so. She wished for Makoto to know she was enjoying this, and she smiled just a bit coyly as she thought about how to answer the question.

"I am, but I would hardly mind something a touch more convenient."

Of course, she would have been perfectly happy to stay right where she was. Her hands didn't move quite yet, staying firm on Makoto's waist for now. She enjoyed this contact, the closeness of it, and she would hardly complain even if this was where they stopped. But, perhaps a sign of the growing confidence within her, Shishiyuki doubted that this would be where either of them wished to cut things short.

MAKOTO ARIMA
"I'd prefer to lay on the bed."

It was a little annoying to pause, though her seated position did make her feel a little awkward especially when she was trying to bend to get lower than Shishiyuki's lips and not bump her back on the kotatsu. It felt restrictive and for whatever this ended up being, she wanted nothing in the way.

Standing up and quickly leaning down to lift up Shishiyuki so that she was firmly held in her hands and held her so that Makoto could look up a bit. A little more red since it elevated her chest to be fairly close to her face and her hands were feeling more than she'd have ever expected when they first met. It was embarrassing but it felt kind of nice to carry her over to the bed and descend and place Shishiyuki on her back, following along so that she was laying on top with a sheepish look to her.

They were on the bed. Maybe she should've asked Kokoro for tips in regards to bedroom things or.. or she could figure them out? It made her feel pretty unsure of herself, for some reason the change of spot made the pressure heavier. Before they were just kissing at the kotatsu, now they were laying in bed together.

Much to her embarrassment, she did get a little lost in though and pause while laying on top of Shishiyuki.

KOIZUMI SHISHIYUKI
In a way, Shishiyuki had expected things to bring them here, but she hadn't forgotten the last time they were in bed together, either. Had that really led them to this? She supposed it had, and the thought was one she couldn't help but smiled just the faintest bit more at. She wrapped her arms around Makoto as she laid atop her, content even if she was still embarrassed and, frankly, a touch aimless.

"You look beautiful, you know."

It was almost idle talk, really, something to keep the silence from becoming too deafening, but she meant it quite genuinely. After all, it was the first thing that had come to her mind. She brought one of her hands to Makoto's silver hair delicately, before her touch once more moved to her waist, under her shirt, and then carefully, slowly, she trailed upward, at such a pace that Makoto would have all the time in the world to stop her if it proved too much.

Why was she doing so? She supposed it simply seemed the correct course of action, really.

MAKOTO ARIMA
The compliment admittedly wasn't something she was expecting, no, nothing about this situation was anything she was anticipating. It wasn't that this scene seemed ever-distant in the abstract but for Makoto she tried to avoid thinking about this because the fear of what might happen or how it might go. Would it live up to fantasy? Would it be satisfying? So many worries but it felt comfortable.

"Thank you. You do too, though I'm still adjusting a little bit but it doesn't matter how you look, you're pretty kido or not."

Had she said that right? She was a little nervous admitting that she saw Shishiyuki so much with some form of glamour that it became easy to grow used to it. They'd met like that and spent so much time like that but she did genuinely mean that irregardless of how she looked, it was appealing.

As the hands trailed up though she inhaled sharply. Admittedly unprepared but it was a long time since anyone had the freedom to gently explore her body like this and she'd allow more yet. Hoping on it really but it did beg the question of her, now that she was on top what was she supposed to do? Keep kissing and nipping her or something more?

A weird question that was delivered casually rather than showing her uncertainty. Despite she was asking in the sense of uncertainty, Makoto's tone conveyed that it could've been no different than asking her what was next on the agenda. It was a little bit confident.

KOIZUMI SHISHIYUKI
It had been one thing to hear Makoto say that she did not need to maintain any pretense around her, but to be so directly complimented on her appearance, in which she took such pride and always needed to hide away, was something she had been quite ill-prepared for. Despite everything they had done to this point, her cheeks turned a remarkable crimson, and she looked away in a manner that could only ever be called bashful.

She thought of how best to answer Makoto's question, her touch not moving until she could respond. What could she really say? Shishiyuki knew rather well that she did not wish to stop, and she did not imagine Makoto did, either. The question, really, was how to word it, and she glanced up at Makoto with what was, hopefully, an alluring look. Was it successful? She hardly knew.

Hopefully that was a helpful answer, but then again, she wasn't certain what Makoto did want to do next. 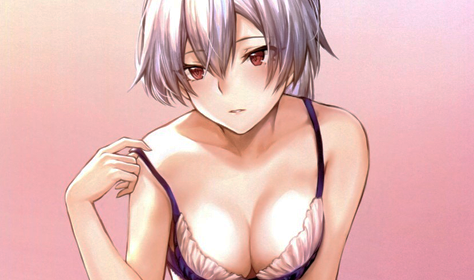 MAKOTO ARIMA
Thumping that once again disturbed her thoughts. Makoto was quickly accepting that this situation was one that existed with her whole being, body and mind, being on a rollercoaster of different and conflicting feelings. Uncertainty, want, distraction, focus and many others which all turned into a multitude of colours inside of her.

What did she want? She thought about it. What did Shishiyuki want from her? What did Makoto want from Shishiyuki? After a small bout of contemplation she felt like she had an answer to that question and that felt right. Was it too far? Shishiyuki would tell her if it was but there was a strange kind of confidence in her breast that her girlfriend would like it.

She sat up, leaving behind those wandering hands which had made their home on her back, she was sitting in her lap with a small grin while fingers reached down and grabbed the hem of her shirt. A quick motion and she took it off over her head before sitting in the lap and looking down from her vantage point. A little embarrassed, it was like she was on display right now and there was a lot more exposed skin than before now on offer that could be explored.