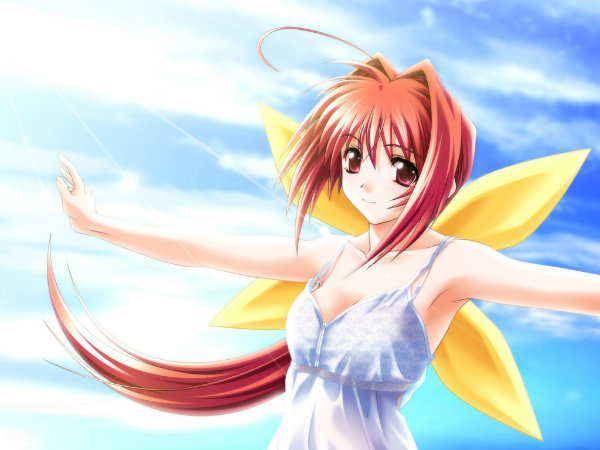 Sumika Saika, The Angel of electricity
Sumika listened to Kanna’s explanation on why that universal peace would never happen. She wanted to say something contrary, but she knew deep down Kanna was right. People would always fight for something, because there would always be things to protect. In order to protect, they need to fight for it. It was just the way life worked. Life would be boring if everyone was the same after all. Yet after her comment about liking Kanna, she got a response clearly in the positive. Sumika, who did not know Kanna well, didn’t find it too surprising, as a lot of people liked her. However, it ended up prompting a response from Snopy. He seemed a little shocked that she would say that.

Then he spoke of how she didn’t really like many people, and how she seemed to practically only trust him. She doesn’t like many people? Why, were people mean to her? People shouldn’t be mean. Innocence, something that never truly left Sumika. She was a strange mix. Her personality was innocent, yet her knowledge made it so she understood many of the worlds workings (a trait innocence generally blocks out). She could fight for what she believed in despite her innocence. She was an odd one to say the least. For her next comment she was a bit more serious. Well you must trust Snopy because he found a way to show he is trustable. I know he would never betray someone he cared about. And you must like me because you see I am a nice person. Who could tell if she was right or not? She may have hit the mark, she might not have, but to her it made perfect sense.
__________________
Snopy's Character List
Snopy's RP Request Thread

Kanna sat back against the couch, sliding her feet over the front like a normal person sitting in a couch would. She couldn't help but smile when Sumika spoke. Her innocent behavior lit up around her. Kanna loved it and hoped she would stay that way forever. Hearing Snopy speak about her dislike for most people, she turned to him and nodded. "I know... Trusting people is not something I think I will ever do well..." Kanna stated and then turned her head back to Sumika who was asking a question. Kanna nodded to answer. "Yeah... People were horrifyingly mean to me... More than anyone really knows." Kanna said and stared towards the ground. She began to think about the passed, that secret she kept even from Snopy. When she thought about it, suddenly flashes from a few nights ago when Snopy was attacking her came to mind. Her face tensed and she closed her eyes, trying to push out the thoughts. She clenched her hands tightly, trying to calm herself down as the flashbacks began to cause her own heart to race.

While she was doing this, she heard Snopy begin to speak. Hearing a single line from him caused her to snap back into reality. Her eyes widened. She hadn't even thought about it before. She had been so caught up in her fear that she did not see the long term consequences of this. After he finished speaking, she turned towards him and looked shocked and extremely angry at the same time. "You... have... to leave... the Gotei..." Kanna said with a slightly trembling voice, "I didn't even... think... I..." Then she realized something else. The way he put that into words sounded like he had actually already left the Gotei. "You already resigned?" Kanna's hands began to clench tighter and tighter. She had not realized how sharp her own nails were and ended up having them stab into the skin, causing a decent amount of bleeding. Having just met her, Kanna did not want to snap and begin to yell at Sumika. She did her best to control her anger and not yell at the girl's older brother. Kanna opened her mouth to speak, hesitating for only a moment, "....... I have to go get some air." She didn't allow him to stop her. She shunpo'd away from him, grabbed onto the door knob, unknowingly covering it in blood, and walked out. She began her way towards the forest, planning to just sit under a tree and think.

Kanna had sat under the tree for only a moment. She wasn't even paying attention to the fact that Snopy's energy was closing in on her. She curled up into the fetal position, leaning her back against the trunk of the tree. She began rocking back and forth, her head lowered between her knees, while she began to mumbled a whole lot of incomplete words. "Thi.. Fu.. Stu. I ca-.. wh..." was all that could be heard coming from her. Then Snopy spoke. She did not change positions. She kept rocking herself back and forth, ignoring him for a while, still mumbling to herself. She hated everything that was going on and now Snopy had already left the Gotei. She felt alone, like no one was there. She was going to return to the Gotei and her position in Squad Four, and Snopy was going to leave. When he had spoke, he had made hints about wanting to go to Karakura. It was like that was all she heard, having ignored or blocked out everything else. Finally raising her head, she looked to Snopy, still rocking herself back and forth like some insane person in a straight jacket. The look in her eyes was of anger, although the rest of her face was void of all emotion.

"I have nothing I want to say to you right now." she spoke in her new voice and tried to sound like she used to, but obviously that was not going to work. "I said I needed some air. Why don't you just go speak with Sumika for a while. I'll come back when I am ready." Kanna had not even noticed the blood on her hands. She had a habit, although she didn't do it much, that when she was trying to hold in her anger or sadness, she'd some how hurt herself. It had been years since she had done something like this, actually stabbing her nails into her own hands.

Kanna just looked away from him, the saddened look on her face. She was not in the greatest state to react the way she wanted to. Hearing him speak about her nails, she raised her hands and looked at him. Her eyes were filled with worry once she realized what she had done. "This is how is started...." she mumbled very, very quietly under her breath. She closed her hands and then looked to Snopy, staring for a moment. She sighed and then moved herself closer to him, but in a more angry fashion. "You want to know what's wrong?" Kanna said, waiting for an answer for maybe half a second and then she spoke again, "EVERYTHING is wrong!!" Kanna slammed her head into the tree behind her, ignored the pain, and stood up. She felt like she deserved it anyway. She took a step back from him and pointed at him, similar to the ways you see a wife do a husband. "You... You... You turned into that... that god damn monster! You tried to kill me! Then, I come back and you say you're leavin-.. No, you LEFT the Gotei." she said, sounding very similar to a nagging wife, "What the fuck are we supposed to do then?! Hm? You mentioned that you were thinking about going to The World Of The Living!? Do you REALLY think that doing that is going to help our relationship at all!? Guess what... IT FUCKING WON'T!" Kanna turned away, walking towards another tree. She raised her fist, punched the trunk of the tree. She winced when she felt a bone snap, but ignored it anyway, keeping her fist on the tree.

Kanna kept her fist on the tree the entire time she listened to him talk. Two things worried her. One of those things was talking about him attacking and attempting to kill her. The second was the solution that might come of him quitting the Gotei. Snopy may be lazy, but he isn't one of those people to sit by and do nothing with the rest of his life. That fact was proven when he spoke earlier about wanting to change the world. You can't do that just sitting on your ass in the Rukongai. Something was going to happen, and she was scared to death of what that might be. Being separated was something she truly did fear and hate. "I understand..." was all she said, dropping her arms back down to her side. "A-And... I-I... thank you f-for that, but Snopy... I know for a fact that you are NOT going to sit in the Rukongai for the rest of your life just because you want to stay near me... You may not be the most active of people, but you aren't one to sit back and do nothing." Kanna turned towards him and leaned her back against the tree, staring at him as if she was on the verge of just giving up and allowing whatever. She was physically weak, which also made her mentally weak. It wasn't a good day for her at all.